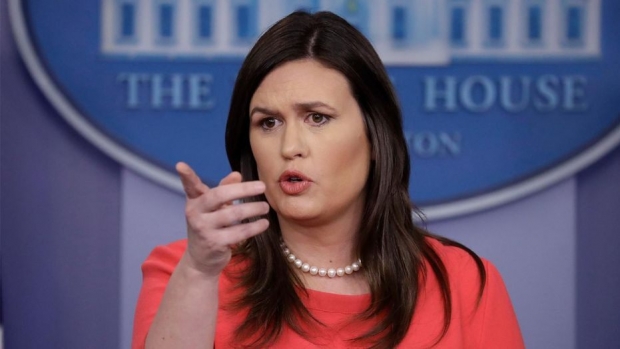 White House press secretary Sarah Sanders will depart her post later this month, according to President Donald Trump.
In the wake of the announcement, media outlets and pundits were divided over her two-year performance. Some celebrated her tenure as successful and accused the media of treating her unfairly. Others criticized her for ceasing briefings and lying to the press; the latter was confirmed in special counsel Robert Mueller's report, which said Sanders admitted to lying about the circumstances surrounding former FBI Director James Comey's firing.
Check out some other big stories this week: Office of Special Counsel: Conway Violated the Hatch Act, Trump Says He Might Accept Opposition Research From Foreign Countries, and Vatican Denounces Gender Theory as 'Confused Concept of Freedom'.
From the Blog: Should children learn about the dangers of extreme tribalism and political polarization from a young age? A new children's book, Two Tribes, not only illustrates the dangers of polarization, but shows compromise is possible.

"But the biggest issue the press secretary encountered could best be described as The CNN Problem. CNN's Chief White House Correspondent Jim Acosta perfected his non-journalistic confrontations in the press room during Sanders’ tenure. The network liked it so much that it hired mini-Acostas — April Ryan and Brian Karem. The press room goal became making a scene in front of the ever-present news cameras."

Four very different replacements for Sarah Huckabee Sanders
Washington Examiner
"Finally, in the practical corner: Nobody. That's right. This White House has largely scrapped the press briefing, and Trump likes communicating directly through his tweets, so why waste taxpayer dollars on a no-show job?”
CNN's April Ryan hits Sarah Sanders on her way out, saying she 'could not face the heat'
Fox News
"During a CNN panel discussion, Ryan said Sanders 'did the right thing' by leaving the administration but stressed she should have done so "a long time ago.'
'She suffers from lie-abetes and her tenure has been fraught with sex, lies, and videotape,' Ryan told anchor Erin Burnett. "From the moment she stepped into that position, there were lies from that podium from her mouth.'"

Sarah Sanders: White House press secretary resigns
BBC News
"Mrs Sanders, who is the latest senior White House aide to exit, said her role had been 'the honour of a lifetime'.
Her credibility was questioned during a combative tenure that saw press briefings all but relegated to a thing of the past."
Sarah Sanders to leave White House
The Hill
"Sanders’s departure caps off a tumultuous, two-year run as Trump’s top spokeswoman, marked by tensions with the press corps and questions about the White House’s credibility. During that time, however, Sanders became one of Trump’s closest aides as well as one of the few remaining people from his 2016 campaign."
Press Secretary Sarah Sanders To Leave The White House
NPR News
"After a number of tense dust-ups during briefings, the White House began to hold press conferences with Sanders less frequently.
It has currently been 94 days since Sanders briefed reporters in the White House briefing room. Instead, journalists now engage Sanders during impromptu question-and-answer sessions on the White House driveway."

Good riddance, Sarah Sanders: Washington's worst communicator
The Guardian
"Speaking to Fox News after the Mueller report destroyed what was left of her reputation, Sanders worked her way through a few more fabrications. 'Look, I acknowledged that I had a slip of the tongue when I used the word ‘countless’, but it’s not untrue,' she said.
That is some World Cup-quality lying. The single sentence includes at least three lies and there are only 21 words in it: an average of one lie for every seven words.'"
Sarah Sanders was a prolific liar for Trump. And she did even more damage.
The Washington Post
"Trump has every reason to be thankful, since Sarah Sanders has been probably the most dishonest White House press secretary in history. Which, when you’re serving the most dishonest president in history, is what the job requires. But what made her so valuable to Trump was the enthusiasm with which she embraced a task that, to anyone with any principles, should have been a horror."
Sarah Sanders failed in almost every aspect of the job
CNN Opinion
"For more than half a century, reporters, acting as proxy for the American public, would meet with the White House press secretary for a briefing almost every day. That came to a screeching halt under Sanders' watch. In fact, she has not done a briefing in 95 days and has only done eight briefings in the last 300 days. By contrast, in recent history, the most briefings that were ever done in a year were done in 1998, the year Republicans impeached President Bill Clinton, according to an analysis done by the American Presidency Project."
Discover more on this topic on AllSides.
Tags:
White House
Sarah Sanders
Story of the Week
News