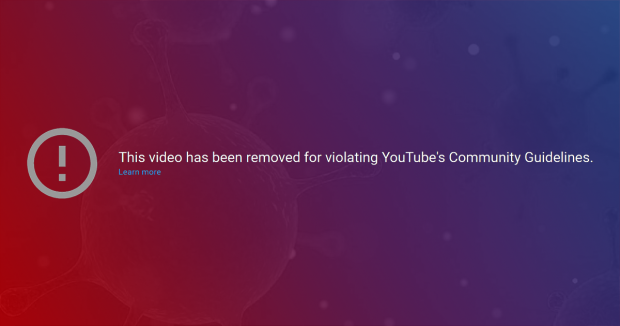 A View From The Left

In their coverage of YouTube’s removal of Bryson Gray’s popular rap song “Let’s Go Brandon,” many right-leaning outlets ignored key factors which likely contributed to YouTube’s decision to remove the song. This example of media bias by omission fueled assertions that big tech was making excuses to censor Democrats’ critics.

While the video is still not available on Gray’s YouTube channel, YouTube tech support said it had forwarded Gray’s concerns to a team for a re-review. Other popular songs titled “Let’s Go Brandon” were not removed and are available on YouTube.

YouTube has banned “Let’s Go Brandon” song from YouTube due to “medical information”. What medical misinformation is in the song? Whoa. pic.twitter.com/W8sCcyH4IM

No article reviewed by AllSides deeply explored Gray’s claim that there was no "medical misinformation" in his song, which would imply that YouTube's action was baseless. To properly evaluate this claim, readers would have needed to see parts of the song that could relate to YouTube’s content moderation policies.

In Fox News’ article, the only mention of the song’s content said it took “multiple shots at Biden regarding his chaotic Afghanistan withdrawal, cognitive ability, and handling of the coronavirus.”

Washington Examiner came closest to making the connection to “medical misinformation,” linking the line “When you ask questions, they start banning” to “skepticism around coronavirus policies and vaccine mandates.”

Here are the full lyrics, courtesy of Genius.com, which feature repeated claims that the pandemic was both fake and “planned”: 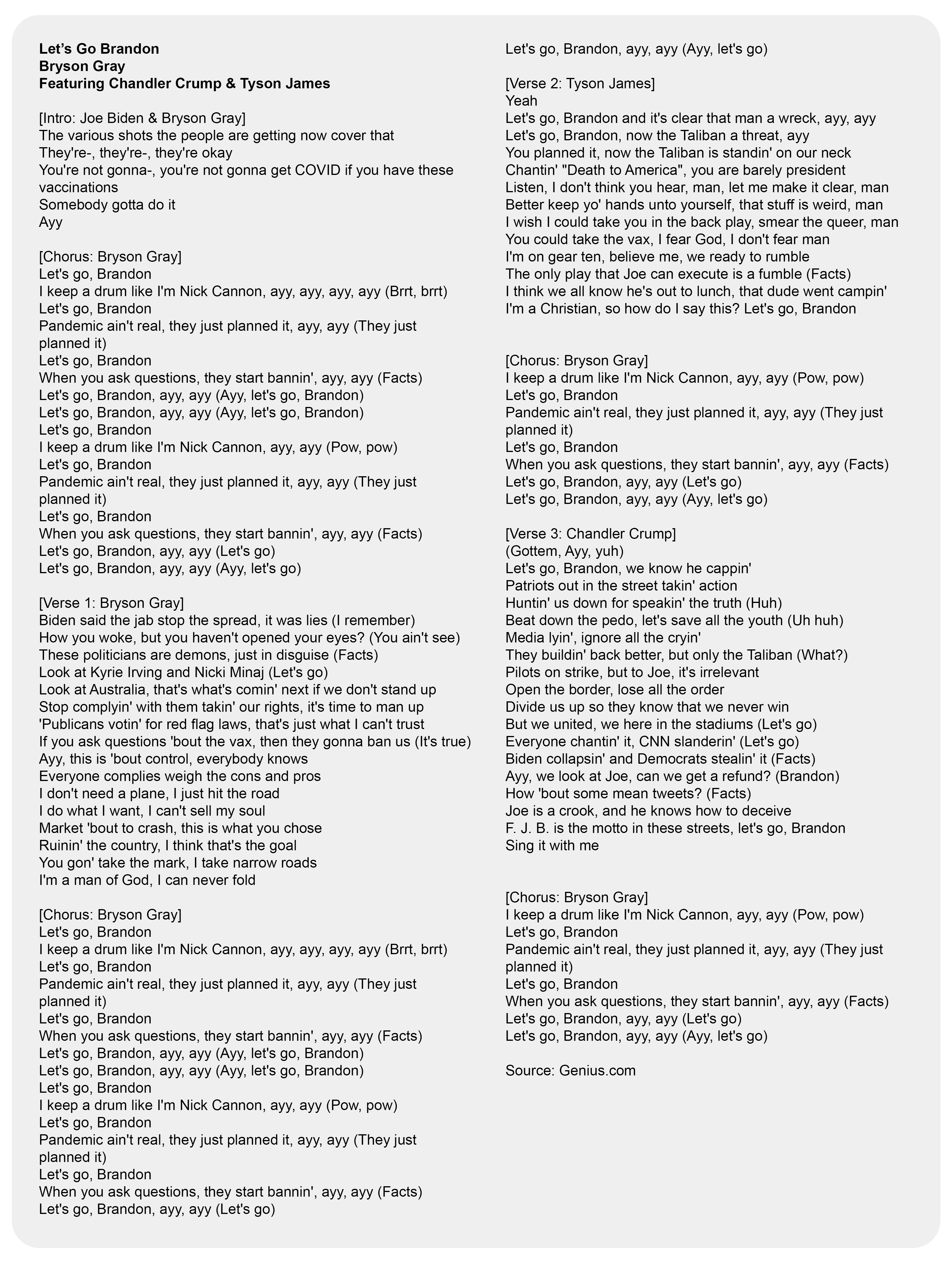 In total, the song mentions the phrase “Pandemic ain’t real, they just planned it” six times. That alone could plausibly put the song at odds with YouTube’s COVID-19 medical misinformation policy, which clearly states that it doesn’t allow “content that contradicts WHO or local health authorities’ guidance on” COVID-19 prevention, transmission, “social distancing and self isolation guidelines,” and “the existence of COVID-19.”

Furthermore, YouTube and other media platforms have been removing content promoting “plandemic” theories since May 2020, giving ample precedent for taking issue with the phrase “they just planned it.”

While most of the song’s lyrics don’t fall under YouTube’s “medical misinformation” policy, some lines could put the song under YouTube’s banhammer for different reasons. In featured artist Chandler Crump’s verse, Crump says “Beat down the pedo, let’s save all the youth.” This appears to be a reference to the “Save the Children” slogan popularized by followers of QAnon, a conspiracy theory alleging that a cabal of Satan-worshiping pedophiles are abducting children and controlling governments.

Last year, YouTube said it would remove content that used conspiracy theories like QAnon to promote violence. Does “beat down the pedo” call for physical violence against Joe Biden? That’s the question YouTube moderators would have had to answer if they had taken that approach.

Crump later says “Biden collapsin’ and Democrats stealin’ it,” an apparent reference to unsubstantiated and widely disproven claims by former President Donald Trump and many of his supporters that Democrats stole the 2020 presidential election through widespread voter fraud. In December 2020, YouTube said it would remove content “that misleads people by alleging that widespread fraud or errors changed the outcome.”

In conclusion, there are three possible grounds YouTube could have stated as justification for removing Gray's “Let’s Go Brandon” from its platform: promoting medical misinformation, advocating violence based on conspiracy theories, and alleging widespread voter fraud in the 2020 election. YouTube picked the first one.

Why this context matters

Whether or not you agree with YouTube's content moderation policies, Bryson Gray's "Let's Go Brandon" does contain content that is at least somewhat relevant to those policies. By omitting the parts of Gray’s “Let’s Go Brandon” that could have motivated YouTube’s actions, news outlets created a causal vacuum in the story they told. What caused YouTube to do this? Instead of being exposed to several clear reasons, readers could fill that vacuum with whatever they wanted — or with whatever pundits told them.

In this case, many readers concluded that YouTube was trying to silence the “truth” Gray’s song was telling. For instance, one comment on the re-uploaded music video (since removed by YouTube) said “The fact they banned his song show[s] exactly how much truth he [is] speaking; and that they fear it.” Over 3,600 others liked the comment.

Gray himself said YouTube’s removal of his video helped his song gain popularity. Speaking to the New York Post, Gray said, “Cancel culture doesn’t work anymore. It only works on people who are scared… all it does is help me out. Thanks YouTube!”

Gray also criticized social media content moderation policies generally, saying, “If you read guidelines for social media sites now, the guidelines themselves are against conservatism. You literally can’t have a conservative opinion. Like I can’t say there are only two genders, or I can’t call somebody by what they are. I have to be delusional with them.”

However, as many conservatives will attest, “conservatism” does not mean saying that the COVID-19 pandemic is “fake” or “planned.” “Conservatism” is not the theory that Joe Biden is part of a secret pedophile ring, nor is it advocating for violence against the president. These things are different from each other, but conflating them as the same allows the targets of online content moderation to claim that their content is being removed for its associated ideology, not its specifics.

It’s similar to an old political strategy called “working the refs,” where politicians and political operatives make accusations of bias in order to sway their critics to treat them more favorably. No one likes to be accused of bias, so some make concessions to the accusing side in order to seem more balanced.

This strategy works on online media companies like YouTube. At Facebook, for example, chat boards leaked to The Wall Street Journal showed heated internal debates over whether the company had avoided enforcing content rules for right-wing sites “for fear of public blowback.”

Ultimately, true objectivity in both journalism and content moderation is not based in blindly acquiescing to every claim of bias, but in carefully studying and applying standards. That’s why AllSides has standards — editorial standards by which we frame our writing, moderation standards to ensure a balanced and informative news feed, and bias rating standards by which we review news outlets’ political biases. To see it in action, refer to our daily balanced newsfeed.

This piece was written by Daily News Editor Joseph Ratliff. He has a Lean Left bias.

This piece was reviewed and edited by Managing Editor Henry A. Brechter (Center bias) and Director of Marketing Julie Mastrine (Lean Right bias).