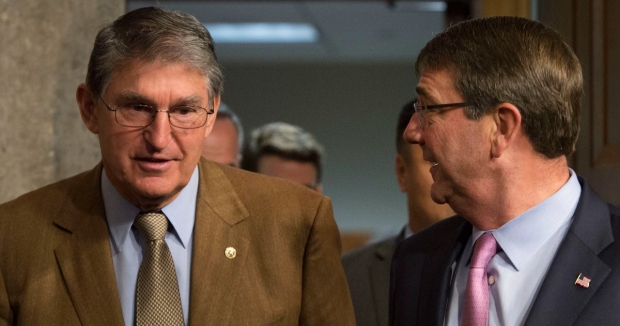 Moderate Sen. Joe Manchin (D-W.Va.) announced last week on "Fox News Sunday" that he could not support Joe Biden's Build Back Better bill — which has led to polarizing reactions across the political spectrum and clear examples of media bias.

"If I can't go home and explain it to the people of West Virginia I can't vote for it," Manchin said during the interview. "I've tried everything humanly possible… This is a no."

The $1.75 trillion Build Back Better plan is a significantly reduced version of Biden's initial $3.5 trillion proposal. It would expand a number of the country’s social safety net programs such as the current Child Tax Credit, and would also include a watered-down version of the Biden administration’s Green New Deal agenda, which would fund subsidies for renewable energy and electric cars.

While the Build Back Better bill passed in the House of Representatives earlier this year with widespread Democratic support, it’s been stalled in the Senate for weeks, where all 50 Republicans and Manchin oppose it. The opposition from the Republican Party transcends the notion that the bill is “too radical or costly” — it represents a pushback against the current state of leadership in Washington “and the comparative weakness of the citizen’s voice.” Manchin, on the other hand, claims the bill would leave the country “even more vulnerable to the threats we face” such as exacerbated budget deficits and fuel inflation.

White House press secretary Jen Psaki called Manchin’s comments a “sudden and inexplicable reversal in his position and a breach of his commitments to the president.” After speaking with Manchin later that night, President Biden told reporters last week that he doesn’t “hold a grudge” against Manchin and the two of them "are going to get something done."

As is the case with many hot-button political stories, coverage of the situation from mainstream left- and center-rated sources differed greatly from coverage by right-rated outlets. Right-rated outlets tended to paint Manchin positively and Biden and Democrats negatively. Coverage from left- and center-rated outlets often focused on efforts to salvage the bill; some voices questioned Manchin’s stance, but others showed support for him.

Sources across the political spectrum spun Manchin’s comments to fit a narrative. Progressives saw Manchin’s disapproval as a “betrayal” of Biden and the Democratic Party at large, and some coverage from left-rated sources seemed to share that position.

More specifically, progressive Democrats depicted a reality where Biden could save some of the crucial elements of the social spending bill. Republicans similarly highlighted a “what if?” scenario — one that would see Manchin flip sides and join their party  — and this idea of a flip was a focus of reports from the right.

Many moderate and center-rated voices saw Manchin’s setback as an opportunity for Democrats to negotiate with Republicans by reducing the cost by $600 million. While the Biden administration wouldn’t be able to accomplish every goal on its wish list, our leaders in the Senate should look at the bigger picture — “stop pointing fingers, come back to the negotiating table and compromise.”

After all, this is what politics should truly be about. Meeting the needs of the American public in a way that serves as many people as possible.

Don’t get fooled by this kind of media manipulation. Use our balanced newsfeed to see the differences in coverage of major stories each day, and get the tools to decide for yourself what you think about the issues.