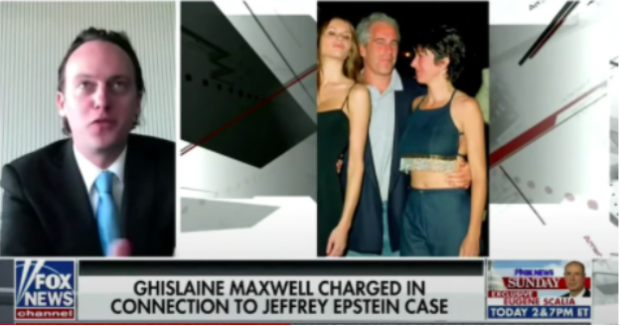 During the television segment, Fox displayed several photos of Epstein and Maxwell together, including the photo featured above.

The photo depicts Epstein, Maxwell and Melania Trump (then Melania Knauss) with someone’s hand around her waist at a Mar-a-Lago party in 2000.

Reports began surfacing soon after that the full version of this photo reveals the hand belongs to none other than Donald Trump.

After coming under fire from media outlets and angered viewers alike, Fox News released a statement saying, “On Sunday, July 5, a report on Ghislaine Maxwell during FOX News Channel’s America’s News HQ mistakenly eliminated President Donald Trump from a photo alongside then Melania Knauss, Jeffrey Epstein and Maxwell. We regret the error.”

It is commendable that Fox News acknowledged the issue and called it an error. Media outlets improve trust when they admit their missteps.

Media bias by photo is a type of media bias that can be used to shape the perception, emotions or impression a reader will have regarding a person or event. Sometimes a photo can convey a hostile or favorable impression of the subject. Reporters may also choose to use photos that show things in a more favorable light — perhaps an image of a politician looking strong, determined or stately.

Media bias by omission is a type of media bias in which outlets choose not to cover certain stories or omit information that would support an alternative viewpoint. Media outlets sometimes omit stories in order to serve a political agenda, or because they would not be popular among readers. This may be understandable if the subject matter is Hollywood or sports — not coverage of current political events.

The Guardian also points out that Eric Trump tweeted a since-deleted photo of Maxwell attending Chelsea Clinton’s wedding with the caption, “birds of a feather.”

While being photographed with Maxwell or Epstein does not necessarily mean a person was involved in unsavory activities, Eric Trump’s message could suggest otherwise, which can fuel undue speculation about sensitive criminal matters.

In reverse fashion, Fox did a bit of free public relations work for Trump. It tried to control its audience’s perception of Trump by seeking to prevent a negative association in audience members’ minds. In doing so, Fox not only neglected to tell its audience the whole story — it worked to keep it from the truth.

Unfortunately, this isn’t the first time Fox has run a misleadingly edited photo. The network issued a similar apology last month after using a digitally altered image in its coverage of Seattle’s autonomous zone.

Fox is enormously influential in the news media, particularly among Republicans. With an estimated 350 million online viewers per month, the website alone is one of the most popular sources of information in the United States. Its television and online news divisions undoubtedly have different managers, but each department frequently uses and re-runs the other’s content. In such a powerful position, there are few excuses for repeated factual offenses.

Because a significant segment of the population looks to Fox for truth, ethics and fairness should top its list of editorial priorities. The network is not alone in its missteps; publications from all over the political spectrum are guilty of similar offenses. But as a news channel geared toward a conservative audience, Fox bears a unique responsibility for conveying the facts, as many Republicans cite it as their main news source.

Don’t allow media bias and filter bubbles to skew your perception of events. Always read across divides to uncover multiple perspectives and provide yourself with the full picture.

Micaela Ricaforte is AllSides’ News Editor. She has a Center bias.