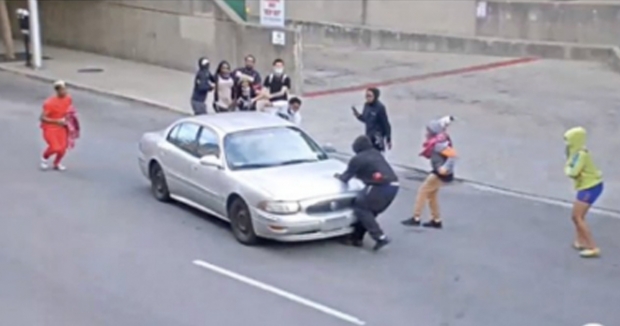 An AllSides reader recently wrote in to point out an apparent case of media bias by NPR online news, which AllSides gives a media bias rating of Center (though close to Lean Left).

In a now-deleted tweet, NPR ran the headline: “Right-wing extremists are turning cars into weapons, with reports of 50 vehicle-ramming incidents since protests erupted nationwide in late May.” The photo NPR used to accompany the headline showed a silver car surrounded by a group of people.

But a full video of the incident and a local news report contradicts this characterization of the photo as being representative of right-wing vehicle ramming incidents. The driver appears to be surrounded by about 11 people, one of whom is holding a megaphone, who yell at and then appear to try to attack the driver. As more people run toward the car and throw objects at it, the female driver hits someone with the car while attempting to flee.

According to local outlet Wave 3 News, police said protesters blocked the intersection and stood in front of the woman’s car with a megaphone. During a verbal altercation, someone ripped out one of the woman’s dreadlocks. When someone pulled a gun, the driver sped off and struck a protester. When she stopped at a red light a block later, someone pointed a gun at her.

“Defending yourself doesn't make you a right-wing extremist,” the AllSides reader wrote in.

Indeed. NPR deleted the tweet and changed the photo on the article, tweeting, “Note: A previous version of this post and story included a photo of a protester being struck by a car in Louisville, Kentucky. The photo, chosen by editors, does not appear to be an example of the assaults described in the story, and has been replaced.” 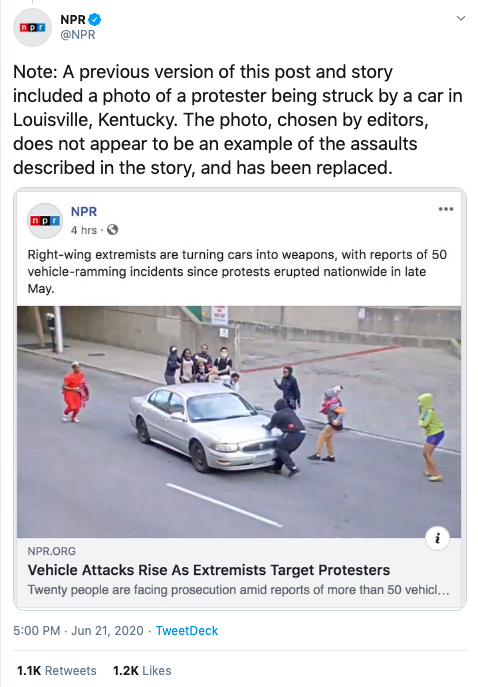 NPR then replaced the photo with one from the 2017 Charlottesville rally, in which James Alex Fields Jr. drove his car into a crowd of counter-protesters. 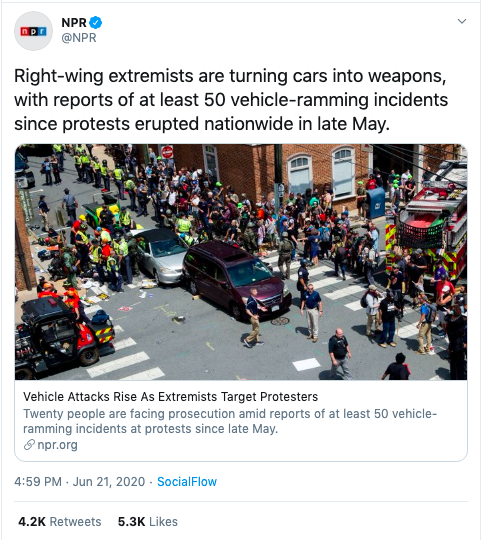 We applaud NPR for coming clean about the original misleading photo. It is good when media outlets are willing to admit their mistakes. Knee-jerk judgements that result from our biases happen often.

Replacing the photo with one from a 2017 rally, though, is questionable. AllSides has described four types of fake news, including misapplied or misrepresented facts. This is when true information or data is misrepresented, misused or misapplied to paint a false picture of reality. In this case, it’s true a driver ran over someone else, but NPR misrepresented the incident: the driver was attempting to flee an attack by protesters, and there is no evidence she held right-wing extremist views. In the case of the Charlottesville rally photo, using an old photo to represent new events is a questionable choice, because those who don't read the full article may get the sense the Charlottesville photo is a recent occurrence, as described in the headline.

While we should forgive journalists when they make mistakes, they must be held to a high standard as society's supposedly trustworthy and impartial truthseekers. NPR’s false framing amounts to bias by photo, a type of media bias, which we have written about on this blog before. Photos can be used to shape the perception, emotions or takeaway a reader will have regarding a person, group or event. For example, Fox News was recently criticized for using altered images on stories about Seattle's Capitol Hill Autonomous Zone (CHAZ), in which the news network superimposed a photo of an armed protestor on other images.

As Americans try to get the facts amid ongoing protests, riots and violence, it’s more important than ever to be diligent about spotting media bias.

Julie Mastrine is the Director of Marketing at AllSides; she has a Lean Right bias.