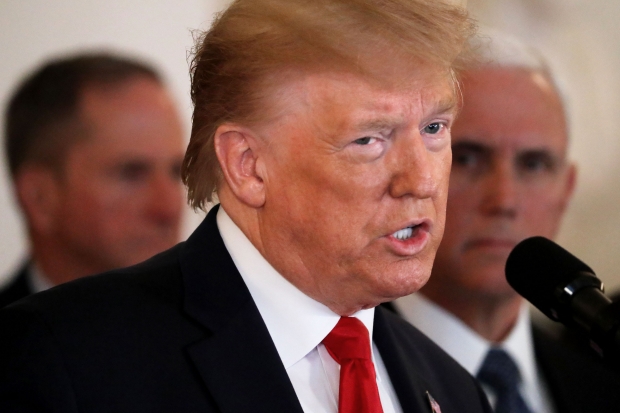 President Donald Trump addressed the nation Wednesday morning, saying the U.S. "is ready to embrace peace with all who seek it," after a series of missile strikes in the Middle East seemingly brought tensions between the U.S. and Iran to a head.

AllSides in the News: AllSides' John Gable and Henry A. Brechter wrote in USA TODAY about what our company does to advance media literacy and mend political polarization.

"The actions followed months of tension that has increased steadily since Trump pulled the United States out of Iran’s nuclear pact with world powers in 2018 and reimposed sanctions that have driven down Tehran’s oil exports and hammered its economy."/em>

"The U.S. assassinated Iranian military leader Qasem Soleimani late last week with an airstrike on Iraq’s Baghdad Airport. Iran retaliated Wednesday by firing missiles at two Iraqi bases where American soldiers are stationed, although no casualties were reported and U.S. forces suggested there had been minimal damage."

"“Frankly, everything that’s happened with U.S.-Iranian relations since the president left the JCPOA (Joint Comprehensive Plan of Action) and imposed these maximum pressure sanctions, everything since then has failed,” Christopher A. Preble, vice president for defense and foreign policy studies at the Cato Institute, told CNBC’s “Street Signs” Thursday."

"Americans were divided on the wisdom of the drone strike at the Baghdad airport last week that killed Soleimani and others: 42% supported it, 33% opposed it; 25% said they didn't know what to think. Republicans were much more supportive than Democrats; independents were almost evenly split."

"But there was overwhelming agreement – in each case by more than 6-1 – that the attack made it more likely Iran would strike American interests in the Middle East (69%), that there would be terrorist attacks on the American homeland (63%), and that the United States and Iran would go to war with each other (62%)."

Trump's Iran strategy: a cease-fire wrapped in a strategic muddle

"Mr. Trump did pull back from the brink of war, at least for now. He made clear that he did not plan to respond to the missile attacks on two bases where American troops operate, which seemed calibrated by the Iranians to make a point without creating more human carnage."

"But the president also promised to double down on sanctions against Iran, turning again to the economic tool he remained convinced would eventually force the country to choose between ruin and survival. Beyond saying the United States “is ready to embrace peace with all who seek it,” he presented no path forward for the two adversaries of 40 years."

After ripping up Obama's Iran playbook, Trump quickly pieces it back together

"In a span of just 24 hours, Trump went from threatening to devastate Iran and bomb its cultural sites — a move widely considered a war crime and condemned by Republicans — to calmly delivering a measured address about slapping economic sanctions on the country, striking a new nuclear deal and urging an international institution — NATO — to become more involved in the Middle East."

"Iran was just the latest example of a pattern of behavior in which the Trump administration acted boldly, ratcheted up a situation and then sought credit for extinguishing the crisis."

"If both sides appear to have concluded, at least for the moment, that starting a full-blown war was a bad idea, the fallout from the Soleimani strike is still roiling the Pentagon, America’s allies and the region. American forces in the Middle East and around the world remain on high alert, and U.S. and allied intelligence officials warn that terrorist groups and individuals with no ties to the Iranian regime may act on their own."

"Tensions between Washington and Tehran have been building since the Trump Administration walked away from the landmark 2015 nuclear deal and began levying crippling economic sanctions more than a year ago. It remains unclear what the lasting price of the latest confrontations with Iran will be for the U.S."

Iran's options in a showdown with America are all bad

"The U.S. would not have to invade Iran to end it as a modern state. A strike against the U.S. or its overseas military installations would result in a devastating response. The theocracy knows that in hours, U.S. air power could take out all of Iran’s oil refineries, power stations, and military bases while suffering few if any causalities."

"Constant provocation is a not a good alternative, but it’s probably seen as preferable to the other poor choices. The strategic aim in such endless tit-for-tat would be to wear down the patience of the U.S. public in an election year. Given the quick criticism of Soleimani’s killing from Trump’s progressive domestic opponents, and given the Obama administration’s past appeasement in response to Iranian provocations, Tehran might conclude that a hit-and-pause strategy is preferable."

"A hush fell over the crowd at the lunch counter Wednesday at Pee Dee’s Brunch and Bar as President Trump filled the overhead TV screen and responded to Iran’s missile strikes on U.S. bases in Iraq. As Mr. Trump delivered the verdict that Iran “appeared to be standing down” and offered the Islamic republic a shot at negotiation and peace, there was a collective sigh of relief in the small restaurant, where customers talked and argued like family."

"Mr. Trump is threading a needle on Iran as he faces reelection, downplaying the prospect of an unpopular military conflict while elevating his hard stance on Tehran’s nuclear program and his efforts to untether the U.S. from the Middle East."

Trump was right on Iran. Democrats are suffering from mass amnesia

"It is one of the strangest phenomena of the Trump era — the memory-holing of Obama’s executive powers. Democrats continuously act as though they’ve just fallen off the Washington turnip wagon when Trump does anything."

"On Iran, Trump made a bold choice and sent a strong message that we aren’t going to take the regime’s provocations and hostility anymore. Obama sent them pallets of cash. Trump sent an MQ-9 Reaper. Anyone who knows how this will all shake out is lying. They don’t. But the Commander-in-Chief took out the world’s most notorious terrorist, one with plenty of American blood on his hands. Trump is the good guy here, not the terrorist."