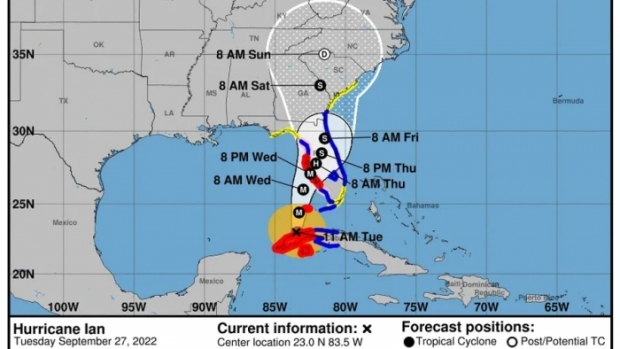 Hurricane Ian strengthened to a Category 4 storm as it made landfall in Florida on Wednesday, just days after knocking out power for the entire island of Cuba.

Hurricane Ian made landfall in southwest Florida early Wednesday afternoon. The storm sustained wind speeds up to 155 miles per hour before reaching land, just barely beneath the threshold for Category 5. Video footage from the hurricane shows floodwaters as high as six feet, engulfing cars and homes. The state is expected to suffer tens of billions of dollars in damages from the storm.

President Joe Biden and Florida Gov. Ron DeSantis both declared states of emergency over the weekend as Ian approached; Biden also postponed a Tuesday trip to Florida because of the storm. Over 2 million Florida residents were ordered to evacuate as the storm neared the Florida coast. On Tuesday, the city of Tampa announced a curfew, and Tampa Mayor Jane Castor told residents to "get away from the water." Most Florida public school districts canceled classes for the week, and airports across the state announced a wave of flight cancellations.

Cuba began restoring power on Wednesday after the storm passed over the island's western tip. By some accounts, it was the first time in living memory that the entire country had been without power. At least two people were reported dead and 20 were reported missing. The news came a little over a week after Hurricane Fiona knocked out power to the entire U.S. territory of Puerto Rico on the five-year anniversary of Hurricane Maria, which caused monthslong blackouts and led to thousands of deaths.

NBC News
"Florida woke up Thursday to the catastrophic aftermath of Hurricane Ian. Ian, one of the most powerful storms to ever hit the United States, wreaked havoc across the state, cutting power to 2.5 million customers, leaving several hospitals without water and trapping thousands of residents in their homes. Officials said it would take days or longer to assess the total destruction of the storm."

Hurricane Knocks Out Power to All of Cuba

Ian now Category 3, on its way near Tampa Bay as major hurricane

Tampa Bay Times
"After a night of intensification, Hurricane Ian has emerged as a major hurricane Tuesday — now on a track further east and south of Tampa Bay. Ian is forecast to approach the west coast of Florida as an extremely dangerous hurricane, forecasters said in an 11 a.m. update from the National Hurricane Center."

Hurricane Ian Gives Ron DeSantis His Toughest Test—and Golden Opportunity
Newsweek (analysis)
"Florida Governor Ron DeSantis may be facing a crucial test as Hurricane Ian heads toward his state and residents prepare for high winds and potential widespread damage. The U.S. National Hurricane Center has said that Ian could become a Category 4 hurricane before making landfall in Florida on Wednesday and the state could see winds of up to 130mph."

The Daily Wire
"Governor Ron DeSantis (R-FL) has announced that more than two million of his state’s residents are under evacuation orders as Hurricane Ian nears landfall as a Category 3 storm. During a press conference on Tuesday morning, DeSantis shared the update that urged Floridians to take necessary precautions as Ian could strike the Gulf Coast as a Category 4 hurricane."

Hurricane Ian makes landfall in Florida as 155mph Category 4 monster
New York Post
"Hurricane Ian made landfall Wednesday in western Florida at 2:24 p.m. — causing panic and wreaking havoc as it destroyed buildings, ripped trees from the ground, caused cars to float away and flooded houses up to their roofs. The storm first hit North Captiva Island, which is just west of Fort Myers and Cape Coral, Accuweather reported."