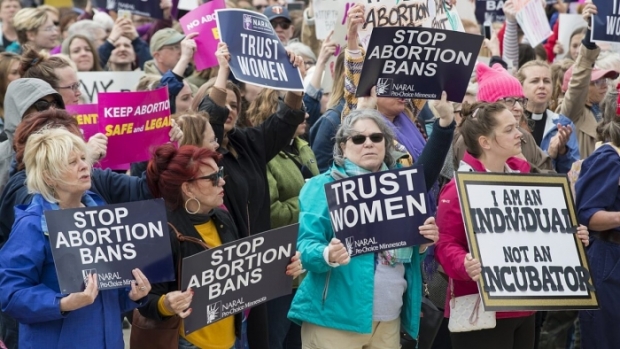 In 13 states, abortion bans have started or will start soon due to "trigger laws," which revive previous abortion bans. State courts in Texas, Utah and Louisiana have already issued temporary blocks on the bans. Sixteen states and Washington, D.C. have laws protecting abortion rights.

President Biden has called on Congress to codify Roe v. Wade, and House Majority Leader Nancy Pelosi said this week that House Democrats are moving to do just that. The legislation would have little chance of passing through the split Senate — but Biden has also said he'd support an exception to the Senate's 60-vote threshold for passing most legislation.

To many on the left and center, the Supreme Court's move hurts women's rights, endangers access to clinics and reproductive care, and acts as another sign that the court is becoming more conservative and dissolving the barrier between church and state. Some expressed fear that other court precedents, such as gay marriage rights, could also be overturned in light of remarks from conservative Justice Clarence Thomas.

To many on the right, the move is a win for state's rights and the pro-life movement, and a step in the right direction legally and morally. Some who still support abortion rights also supported the court's decision because it returns the question of abortion to state legislatures. Some center-right libertarians broke from conservatives and expressed concern that the ruling would lead to over-policing of abortion and privacy issues.

"Puget Sound Anarchists, an Antifa-affiliated group operating out of Washington state, included the CPC map in a post celebrating the vandalism of a pro-life clinic in the state by another radical group. The group itself in May publicly claimed responsibility for vandalizing four different churches in Olympia, Washington, because of their supposed ties to pregnancy resource centers."

Democrats Are Fooling Themselves On The Popularity Of Abortion

"Why don’t they ask voters if they support the Democrats’ efforts to force states to allow abortions after viability and sex-selective abortions, and strip parental or guardian notification for minors? These are real-life policy proposals that Democrats want to pass. The only national bill Republicans in Congress have forwarded in recent years has been a “heartbeat” bill. And guess what? It polls very well."

Frustration at Biden and other Democrats grows among abortion-rights supporters

"Biden is the leader of the party that supports abortion rights, but since the ruling, his visibility as part of the response has been limited. Immediately after the ruling, he gave a statement, but the White House also canceled the daily press briefing, and he left for a major summit in Europe. His fellow Democrats are not satisfied. Over the weekend, 34 senators urged Biden in a letter to lead a national response."

How blue cities in red states are resisting abortion bans

"Cities can’t make abortion legal in states that have outlawed it. They can take steps to decriminalize the procedure and potentially limit any adverse consequences that pregnant people who have abortions and abortion providers might face. But they can’t give abortion seekers what they need the most: access to the procedure."

The future of privacy rights in a post-Roe world

"Privacy experts fear the Supreme Court's decision to overturn federal abortion rights will erode other key protections and expose daily life online to criminal investigations. The federal right to an abortion provided by Roe v. Wade had its foundation in the conception of a personal right to privacy, broadly believed to cover everything from contraception use to same-sex marriage."

How overturning Roe will reverberate through America

"At the least, the ruling thrusts the Supreme Court directly into the maelstrom of the nation’s polarized politics with a definitive ruling on a highly contested issue, perhaps affecting how millions of citizens view the court’s role in the unique U.S. system of separated institutions that share and compete for power."