Pro-Choice Protests Across US After Supreme Court Decision

Thousands of pro-choice supporters have gathered at rallies across the nation in protest of the Supreme Court's decision to overturn Roe v Wade.

The ruling, which spurred divided reactions from across the spectrum, granted states the legal authority to pass laws that criminalize abortions at any point during pregnancy. Abortion bans will go into effect in several states within the next few weeks, while at least 16 states and Washington, D.C. put laws in place that automatically keep abortion legal before Roe was overturned. 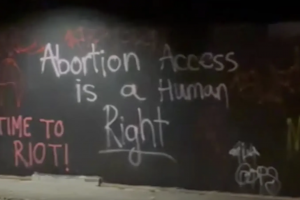 A group of black-clad marchers​ turned violent Saturday night in Portland, Ore., smashing windows and scrawling graffiti on downtown businesses as protests continued to rage across the nation against the US Supreme Court ruling overturning Roe v. Wade.​

Several banks and coffee shops had their windows broken, a van belonging to Portland Public Schools was spray-painted, and a pregnancy​ resource center was vandalized, the Portland Police Bureau said in a statement Sunday. ​

“If abortions aren’t safe then you aren’t either,” ​a flier announcing the march​ said, according to Oregonlive​. ​ 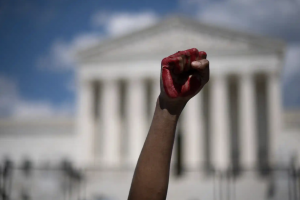 Protests over a US supreme court decision that overturned abortion rights continued across the country this weekend. In New York, thousands marched to voice their anger at the ruling that came at the end of a dizzying week around not just reproductive rights but also gun carry laws and the US Capitol attack.

“Not your uterus, not your choice,” many shouted as the demonstrations progressed in Washington DC., New York City, Chicago, Los Angeles, Seattle, Atlanta and Austin. 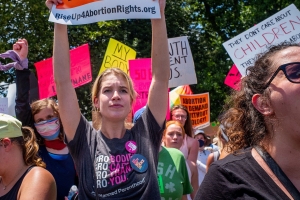 Protests and rallies continued Saturday in response to the Supreme Court’s ruling that ended constitutional protections for abortion rights, as states continue to adjust to a decision that overturned nearly 50 years of law.

Abortion-rights demonstrators have converged in cities across the U.S. since Friday’s decision. Demonstrations took place from Los Angeles to Philadelphia on Saturday, following protests Friday from Washington Square Park in New York City to Cedar Rapids, Iowa, and Albuquerque, N.M.

In Indianapolis, hundreds of abortion-rights supporters gathered outside the Indiana Statehouse, chanting and waving signs. “The 1950s called. They want...