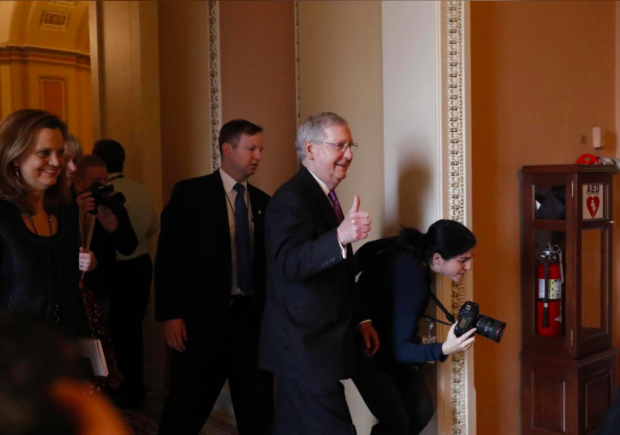 The government shutdown came to an end after Senate Majority Leader Mitch McConnell (R-KY) promised Minority Leader Chuck Schumer (D-NY) that DACA legislation would advance to the Senate floor no later than Feb. 8th. Many Right-leaning outlets celebrated the news as a victory, while many Left-leaning outlets argued that Democrats conceded too quickly.
As we do from time to time, we are updating some of our source ratings. Make sure to check out the Daily Beast media bias update. And stay tuned for Politico next week.
Other news from AllSides:
Snippets from the Center
Government shutdown fizzles on spending, immigration deal in Congress
Reuters
"Congress voted on Monday to end a three-day U.S. government shutdown, approving the latest short-term funding bill as Democrats accepted promises from Republicans for a broad debate later on the future of young illegal immigrants.
...
The shutdown undercut Trump’s self-crafted image as a dealmaker who would repair the broken culture in Washington. It forced him to cancel a weekend trip to his Mar-a-Lago estate in Florida.
...
Both sides in Washington had tried to blame each other for the shutdown. The White House on Saturday refused to negotiate on immigration issues until the government reopened.
...
Some liberal groups were infuriated by the decision to reopen the government. 'Today’s cave by Senate Democrats - led by weak-kneed, right-of-center Democrats - is why people don’t believe the Democratic Party stands for anything,' said Stephanie Taylor, co-founder of the Progressive Change Campaign Committee."
Snippets from the Left
The Government Shutdown Is Over and It May or May Not Be Because Democrats Folded Like a Cheap Suit
Slate
"Minutes ago, the majority of Senate Democrats voted for a three-week funding extension bill that includes a six-year extension of the Children’s Health Insurance Program, purportedly doing so in exchange for Senate majority leader Mitch McConnell’s promise to bring DACA legislation to the floor of the chamber for debate/voting no later than Feb. 8. (A substantial number of existing DACA protections for undocumented individuals brought to the U.S. as children begin expiring March 5.)
That 'promise,' to be clear, is not formally binding; Democrats’ leverage if he breaks it would ostensibly be to cause another shutdown. Whether or not this sort-of concession was worth the Democrats’ cooperation will no doubt be a subject of much discussion in the press and among progressives in coming days; observers have already noted that most of the few Dems who didn’t vote “yes” on the deal are either facing primary challenges from the left or are expected run for the party’s 2020 presidential nomination.
In any case, the only takeaway that we can be sure of at this point is that Americans are about to start being able to use national park bathrooms again."
Snippets from the Right
Retreat: Senate Dems Abandon Unpopular 'Schumer Shutdown,' Advance GOP Bill to Reopen Government
Townhall
"Last night, Mitch McConnell offered Senate Democrats an off-ramp from their foolish, quixotic, unpopular Schumer Shutdown -- and with internal anxieties and divisions reportedly ratcheting up, they decided to take it. Five members of the minority caucus already broke ranks on Friday to vote in favor of the House-passed spending bill, meaning that a simple majority of the US Senate was on the record in support of the GOP's government funding bill. A number of the tiny handful of Republicans who voted with Democrats last week publicly lined up behind McConnell last night.
To recap, the Republican-held House approved it, a majority of the Republican-held Senate, and the Republican president was prepared to sign it. Some liberals and spinmeisters reviewed these facts and still insisted that this shutdown was the fault of Trump and his party. The basic facts prove otherwise, however, so much so that even the Associated Press and New York Times had no choice but to appropriately assign blame where it belongs.
...
As we saw with the 'Gang of Eight' in 2013, producing a feel-good bipartisan consensus bill from the Senate does not mean that the more conservative House GOP majority will even consider it, let alone enact it. The goal should be passing legislation that can actually become law. And that will require a fair and equitable legal resolution for the DREAMers and meaningful border security and immigration enforcement. Parting thought: Does this inevitable Democratic cave genuinely infuriate lefty immigration activists, or is this just transitory sound and fury?"
Discover more on this topic on AllSides.
US Congress, Immigration, Politics, Story Of The Week, News