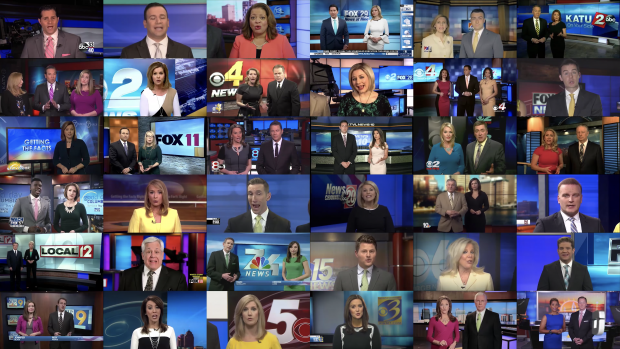 Sinclair Broadcast Group caused an uproar after they required local news anchors across the country to recite an identical script condemning “one-sided” stories in the national media. But does unbiased news actually exist?

One of our core beliefs at AllSides is that it does not. Everyone is biased, so finding completely objective news is a near impossible task. In our recent article published in the Washington Examiner, we recommend a balanced news diet, suggesting that readers consume news from a variety of perspectives.

It’s official: “Fake news” is the new “Thanks, Obama!”

In a recent high-profile development concerning the all-encompassing term, Sinclair Broadcast Group filmed local news anchors across the country reciting a canned script about the dangerous “one-sided” stories in the national media and (you guessed it) fake news. Backlash was swift. Dan Rather assailed the move as “Orwellian.” Kathleen Parker warned that such overt prejudice against the mainstream media could lead to a “Soviet-style propagandist state.” Several outlets highlighted the media conglomerate's conservative history.

The promos are troubling, yes, but not because they have a Right-leaning slant.

The real problem? Sinclair issued a blanket condemnation of biased coverage, hoisting themselves up as the standard-bearer for honest reporting. In reality, though, unbiased news does not exist.

There, we said it.

Everyone is biased. It’s impossible to avoid. Journalists approach every story with unique life experiences that consciously and subconsciously influence the work they do, whether they identify as Left, Right, or anything in between. What’s more, the 24-hour news cycle operates on a business model that relies on inflaming the political divide, one that has already reached record levels of hyper-partisanship.

Ask your Left-leaning friends where to get objective news and they might point you towards the New York Times. Surely such a reputable outlet is unbiased, right? Wrong: it has a verifiable liberal media bias. Ask your Right-leaning friends for the best balanced news, and they’ll almost certainly send you to Fox News, which has a clear conservative media bias.

In an era of tribal politics, “unbiased” and “fake news” are now relative. Where the former once described a piece devoid of opinion, it now describes whichever opinion most closely confirms our beliefs. Where the latter once referred to any inherently false story (a la Pizzagate), it now refers to stories that contradict our partisan worldview.

In other words, the Walter Cronkite years are over.

Cronkite, who reigned as the “go-to” for objective news from the early 1960s to the early 1980s, was heralded as “the most trusted man in America.” He crafted a single national narrative, signing off each night with, “And that’s the way it is.” Fast-forward almost 40 years, and the idea of one authoritative news figure sounds like a lofty pipe dream — or a nightmare, depending on how the day’s facts line up with an individual’s partisan ideology. That might not be such a bad thing, though, as Cronkite himself cautioned against a monopoly on perspective. "It bothers me a great deal that people would say, 'I believe every word you say,'" he told the New York Times in 1989.

Today, people across the globe have unfettered access to countless media outlets. The upside is more nuance across the board. The downside? If you want to stick to sources that solely confirm your biases, the world is your oyster.

Just look at the New York Times’ newest marketing mantra: “Take a stand against fake news, alternative facts and deceptive data. ... Subscribe to The Times and make it possible for our journalists to debunk the lies and expose the facts the world needs to know.” And just last year, CNN (“the most trusted name in news”) released its now-famous apple ad, featuring a shiny, red specimen against a white backdrop.

But, ironically, perhaps all three are on to something. Highlighting the pervasive media bias in opposing sources (even if inappropriately labeled as “fake news”) sends a painful reminder to Americans caught in the middle that the days of one reliable narrative are gone. The conceivable solution? Consume a balanced news diet of sources across the political spectrum.

A free press should provide exactly that. In theory, it affords individuals the opportunity to engage with a variety of perspectives before coming to their own conclusions. But if we receive all of our information through one biased angle, we are not so much informed as we are manipulated.

Now that “unbiased” journalism essentially means the opposite, Americans should spend more time engaging with every perspective, even those that belong to the other side. Only then will we have the full story.