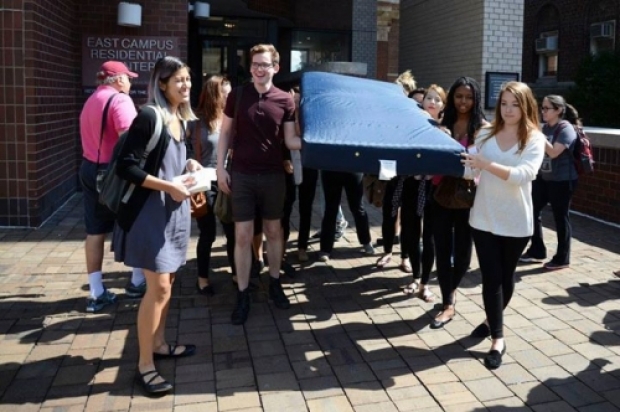 Trust in mass media is at an all-time low. According to a recent Gallup study, only 40% of today’s Americans believe that the news is reported “fully, accurately, and fairly” by the media. Many recognize that instead of seeking balance, the media’s goal is often to construe stories that lead readers to a desired conclusion.

For example, who do you think should face more serious consequences?

Recent events demonstrate that the press is more willing to penalize writers for espousing unpopular views than they are to discipline journalists who produce stories that have no basis in fact.

On September 23, 2014, long-time Forbes writer William Frezza wrote an editorial entitled “Drunk Female Guests Gravest Threat to Fraternities.” Frezza takes an atypical slant on the issue of sexual assaults on college campus: he suggests that fraternities should protect both themselves and intoxicated female guests by ejecting girls who appear out of control from their parties as freely as they bounce rowdy males.

The first sentence of Mr. Frezza’s article acknowledges that the headline is intentionally contentious to grab attention. And attention he grabbed. After a rapid and powerful backlash of criticism, Forbes quickly pulled the article (reposted here).

Regardless of whether one agrees with his position (or whether it’s conceivable that a fraternity would follow his advice), a thorough read of this article reveals that it’s not misogynistic. Frezza’s point is that out-of-control guests, regardless of their sex, mean trouble for their hosts. Despite today’s supposed gender equality, women who willingly drink to excess are often given a pass on reckless behavior, though drunk males are rarely cast as “sympathetic victims, as opposed to the irresponsible jerks that they are.”

Perhaps Bill Frezza most grievous error was to overestimate the ability of Americans to consider this sensitive topic from outside the typical vantage point. He paid dearly for his controversial opinion: Frezza was promptly fired as a Forbes contributor.

Two months later, an article by Sabrina Rubin Erdely appeared in Rolling Stone magazine, claiming to expose a vicious gang rape on the University of Virginia campus. The story accuses members of the Phi Kappa Psi fraternity of a particularly brutal crime in precise detail. However, just days after the article appeared, other publications began to unearth basic facts which didn’t add up.

The investigation for the story relied solely on the firsthand report of an anonymous purported victim called “Jackie.” Erdely asserts that she didn’t press Jackie for details when Jackie declined to provide basic information, such as the names of friends who were with her the evening of the attack, because she didn’t want to upset the victim.

Against journalistic protocol, Erdely failed to contact or confirm the identity of the accused perpetrators. Details of Jackie’s account, such as whether a fraternity party and an initiation of new brothers had taken place on the night alleged, were not verified and turned out to be false.

A Columbia University report called the article a “journalistic failure,” which set aside essential reporting, editing, editorial supervision and fact-checking practices. Yet no one associated with the article was terminated, fined or otherwise penalized. Publisher Jann Wenner stated that the Columbia report “was punishment enough.”

One of the first to question the Rolling Stone article was Richard Bradley. Bradley has experience in this area: when editor of George Magazine in the 1990’s, he was famously duped into publishing several fabricated stories by journalist Steven Glass. Bradley has learned to look at stories “with a different set of eyes—not the eyes of a man or a woman, but those of a magazine editor who has seen fakes before.”

Bradley’s advice: “One must be most critical about stories that play into existing biases. And this story nourishes a lot of them: biases against fraternities, against men, against the South; biases about the naiveté of young women…And, of course, this is a very charged time when it comes to the issue of sexual assault on campuses. Emotion has outswept reason.”

Erdely presented a fabricated story as documented fact. Regardless of whether someone found his viewpoint offensive, Bill Frezza skews no facts nor states erroneous information in his opinion piece. The fact that Freeza was the journalist who was terminated speaks volumes for the mindset of the industry.

When it comes to the issue of college sexual assaults, a lack of even-handedness has been displayed by the media before: earlier in 2014, the media was flooded with stories about Emma Sulkowicz, a Columbia University student who vowed to carry a mattress around campus until her alleged rapist, Paul Nungesser, was expelled. “Every day, I am afraid to leave my room. Even seeing people who look remotely like my rapist scares me,” Sulkowicz says in Time’s cover story.

Only in April of 2015, when Nungesser filed a lawsuit of his own, did his side emerge, painting a very different portrayal. He reveals that the pair had been in an intimate relationship involving casual sex for months when the alleged incident occurred. It was seven months after the incident when she filed a report with the university, while in between she’d sent him many text messages, both friendly and sexual, which led to affectionate exchanges between them. He denies any wrongdoing. Columbia, the NY Police Department and the NY district attorney’s office all conducted investigations, and charges were dismissed each time. When Sulkowicz appealed to the school, the verdict was upheld. Yet none of these facts were mentioned in articles about Sulkowicz’ mattress project.

Nungesser called the mattress campaign a groundless “act of bullying, a very public, very personal and very painful attack” that “effectively destroyed” his reputation and student life. He has been shunned by fellow students and plagued with cyber-threats. Meanwhile, Sulkowicz’ fame has grown: she was even invited to attend a State of the Union address.

“This is a good cause—but even in a good cause, you have to try to check the facts,” says Nungesser’s mother Karin. “We can’t understand to this day why the major media never asked Paul about his side.”

Perhaps the saddest irony is that, by withholding the full story, journalists have damaged the very cause they’re trying to champion. Instead of enlightening us on horrors of rape on campus, these stories give the public more reason to question true victims.

When personal agenda obstructs journalists from seeking the truth, and the media withholds controversial viewpoints for fear of offending the public, we have little reason to trust the press.