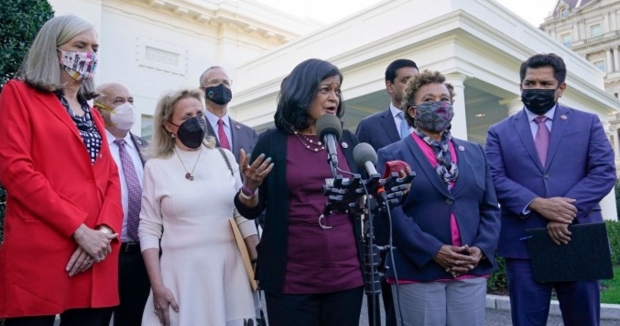 Biden has reportedly knocked the spending bill's price tag down from $3.5 trillion to between $1.75 and $1.9 trillion. Plans for two years of free community college, a $150 billion clean energy program and Medicare expansions are likely to be cut. All Republican senators oppose the bill out of fear that it will drastically increase the national deficit. Meanwhile, Biden is negotiating with progressive Democrats who fear the new price range is too low.

Biden and Democrats maintain that despite the trillion-dollar price tag, the plan's actual cost is close to $0 because it purportedly adds nothing to the deficit and doesn't raise taxes for most Americans. Republicans have criticized that framing as false.

Recent developments in the spending plan have been covered across the spectrum. Left-rated outlets often highlighted the planned cuts and their potential consequences; some also focused on centrist Democrats who oppose the higher price tag, sometimes framing them in a negative way. Right-rated sources often analyzed the plan's other spending categories and their estimated cost, framing the plan as extremely costly and arguing that it will drive more inflation and make the economy vulnerable to recession.

"After weeks of back-and-forth, Biden laid out details of a scaled back version of the plan, bringing the top line number down to roughly $1.9 trillion from $3.5 trillion and specifying that certain provisions like free community college would be left out."

"As a senator representing the second-largest coal-producing state and the founder of the coal company that his son runs, Sen. Joe Manchin, D-W.Va., has a stake in the future of coal as an industry; as chair of the Energy Committee, he has been responsible for drafting legislation that makes up the bulk of the climate change-related provisions in the bill."

As Biden Agrees To Cut Free College, Elder Care, Pentagon To Get More Funds Than It Wants

"Congress is projected to spend more than $7 trillion on the Pentagon over the next 10 years, which is more than double the cost of the Build Back Better Act over the same timeframe. Yet Biden and Democrats have been working to shrink their bill and reach a compromise between progressive and moderate lawmakers."

"Democrats of every stripe have one thing going for them: Virtually every member of the party agrees that a failure to pass any legislation would be a disaster. Additionally, a firm agreement on the social spending bill would unclog passage of a separate and popular $1 trillion bill dealing with traditional infrastructure."

"Far-left lawmakers have claimed that the social safety net programs created by the bill would be entirely paid for by the tax increases, as well as other mechanisms like levies on companies’ foreign earnings and stepped-up enforcement by the Internal Revenue Service. But with the Senate split 50-50, Democrats must ensure all their members — including Manchin and Sinema — support the final form of the spending plan."

The $2 Trillion Is Phony Too