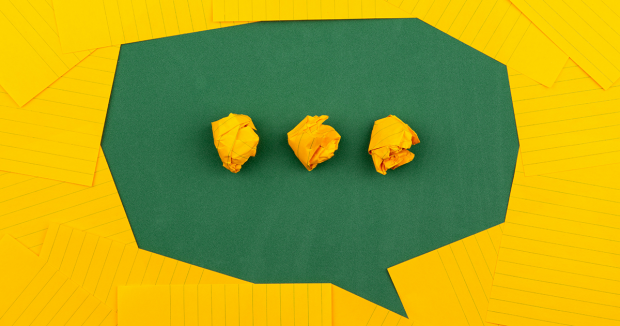 By Volodymyr Hryshchenko on Unsplash.

Just over half (52%) of college students say they “often” or “always” refrain from sharing their opinion on social or political issues in a classroom setting out of concern for potential consequences, according to a recent survey commissioned by Intelligent.com.

More than 7 in 10 students report self-censorship at least occasionally.

The study found that conservatives are slightly more likely (55%) to “often” or “always” self-censor in a classroom setting than moderate (52%) or liberal (49%) students. 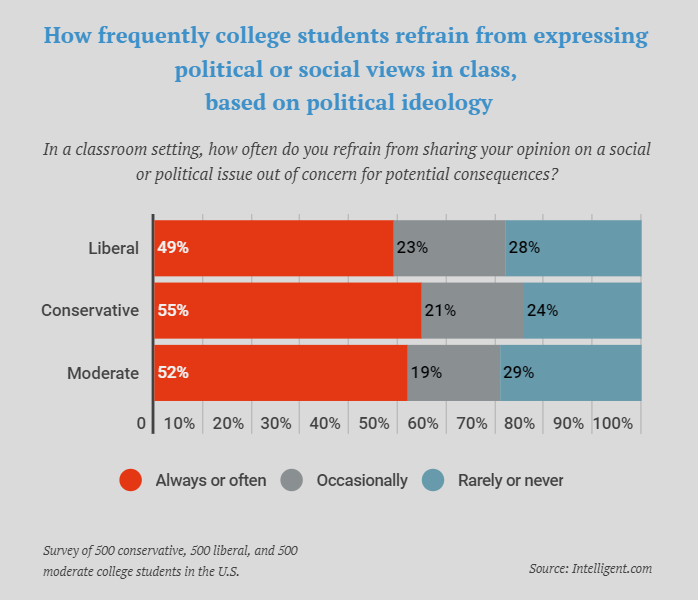 Previous research suggests that college campuses in the U.S. lean to the left. Other studies have found that Republicans and Independents are more likely to self-censor over fears of losing a job or missing out on job opportunities. Why would it be the case, then, that students report self-censoring at similar levels?

The Intelligent.com study found that conservative and liberal students alike are concerned about losing their classmates’ respect (40% and 37%, respectively). Conservative students are more likely to worry about jeopardizing their grades or losing their professors’ respect. Liberal students, on the other hand, see being ridiculed or confronted as a top concern.

Still, conservative men are the most likely to self-censor (58%), and cite loss of respect among professors or other students as leading concerns. Liberal men (54%) are also more likely than liberal women (45%) to self-censor their viewpoints “often” or “always” in the classroom.

According to James M. Patterson, an Associate Professor of Politics at Ave Maria University in Florida, “students simply have no idea how to disagree constructively, or even if constructive disagreement is possible. Students seem to believe that disagreement is taking sides. Hence, they can only imagine that the potential consequences will be, at minimum, to alienate some of their fellow students.” Patterson has taught at both right- and left-leaning college campuses.

Conservative students also express being more open to taking a class with a professor who has differing views than their own (68% say they “definitely” or “probably” would), compared to liberals (59%). The same applies to campus speakers: conservative students are slightly more likely to attend an on-campus event featuring a guest who has different political or social opinions than liberals (64% and 60%, respectively, say they “definitely” or “probably” would).

Debates around free speech on college campuses have driven the right-left divide for several years. You can use AllSides to read more perspectives on the issue.