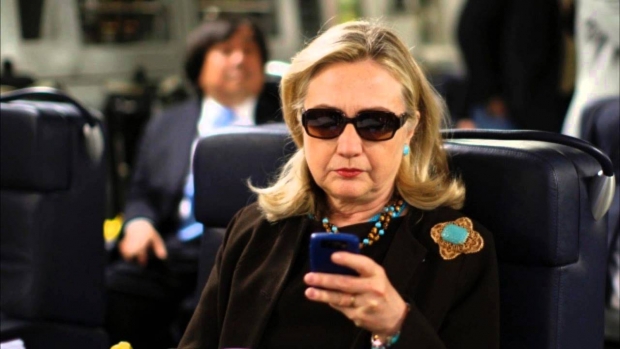 It’s been a tough media week for the front-running presidential hopefuls. While Trump University has begun receiving strong media scrutiny, many headlines this week focused on Hillary Clinton’s email server controversy. The Inspector General released a new report on the matter and Clinton found herself again being asked to defend her decision to exclusively use a private email server while serving as secretary of state. Did she respond appropriately? Is this a legitimate scandal or essentially unimportant? This week we bring you a few different views from different sides of the media.
See other news featured by AllSides such as State Dept. Edited Press Briefing Video, "Trump University" Documents Unsealed, Bernie Fights Convention Posts and the latest AllSides News.
Snippets from the Left
Who Really Cares About Hillary’s Email?
Huffington Post
“The specific ‘rule’ Clinton allegedly broke states that the ‘general policy’ of the State Department is for employees to use government email service on a government-issued device, but it then goes on to provide the conditions under which exceptions are made. The report acknowledges that Clinton had been openly using her private email server since she was a senator, through her 2008 presidential campaign and then as secretary of state. In fact, during her tenure at the State Department, 55,000 emails were sent by Clinton using her clintonemail.com email address, all of which have been printed and made available, more than any other previous secretaries.
The report also clearly states: ‘Laws and regulations did not prohibit employees from using their personal email accounts for the conduct of official Department business.’ And nowhere in the report is there suggestion that Clinton’s use of a private email address and server was ‘illegal.’”
Snippets from the Right
Politifact: Hillary Clinton's Repeated Claims Using Private Email Server 'Was Allowed' is False
Town Hall
“In interview after interview, Clinton continues to claim what she did was allowed. This isn't true and now, Politifact is rating her claim that using a private email server to conduct all government business was ‘allowed’ as officially false.…But it isn't just Politifact coming down on Clinton's falsehoods. Last week The Washington Post editorial board classified Clinton's email practices as ‘inexcusable.’ The New York Times editorial board pointed out she's ‘drowning in email’ and theWall Street Journal focused on the national security risks Clinton took to maintain a personal email server to avoid transparency. USA Today stated plainly, ‘Hillary Clinton broke the rules.’
Meanwhile, the FBI continues its criminal investigation of the matter.”
Snippets from the Center
Clinton: I didn't tell anyone to hide that I was using private email
Politico
“Hillary Clinton on Tuesday rejected the idea that she instructed anyone at the State Department to keep quiet about her private email server, after an inspector general report released last week found that some staff were told to hush up about the unusual setup.
…‘I do not know who that person is or, you know, what that person might have said because it’s not anything that I am aware of,’ Clinton said. ‘I emailed with hundreds of people, and I emailed department officials directly with my email as other secretaries have done.’
‘I certainly never instructed anyone to hide the fact I was using a personal email,’ Clinton said, laughing toward the end of her sentence. ’It was obvious to hundreds of people, visible to the many people that I was emailing throughout the State Department and the rest of the federal government.’”
Discover more on this topic on AllSides.
Hillary Clinton, Emails, News