During Tuesday’s presidential debate, moderator Chris Wallace asked President Donald Trump if he was willing to condemn white supremacists and militia groups and “to say that they need to stand down and not add to the violence” in cities like Portland. Trump replied: “Sure, I’m prepared to do it, but I would say almost everything I see is from the left-wing not from the right-wing. I’m willing to do anything, I want to see peace.” Pressed by Wallace and former Vice President Joe Biden to “do it,” Trump said: ”Proud Boys, stand back and stand by. But I’ll tell you what, somebody’s got to do something about Antifa and the left.” The Proud Boys, a self-described “western chauvinist” group, reportedly celebrated Trump’s comments; Proud Boys chairman Enrique Tarrio denied they are white supremacists. 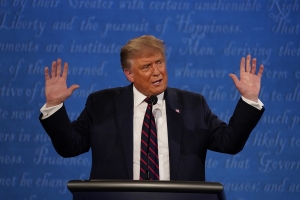 In a night marked by constant interruptions and blatant fact-fudging, it was a moment that sparked a separate online melee.

Moderator Chris Wallace gave President Donald Trump an uninterrupted opportunity to condemn the nation's biggest domestic terrorist groups: white supremacists. Instead, Trump said they should “stand back and stand by.” What's more, he said, the violence in cities like Kenosha and Portland is a “left-wing problem, not a right-wing problem.” 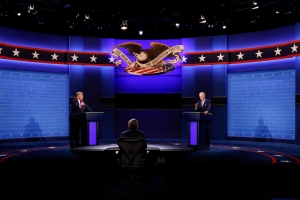 President Trump and Joe Biden tried to shift back to their respective campaign themes after a raucous first debate that left prominent members of both parties responding to Mr. Trump’s deflections when asked to condemn white supremacists.

Mr. Biden, the former vice president, spoke Wednesday at a train station in Cleveland as he started a tour across eastern Ohio and western Pennsylvania and said the debate proved that Mr. Trump doesn’t understand the lives of working-class Americans. The president, meanwhile, slammed moderator Chris Wallace, a Fox News anchor, and said... 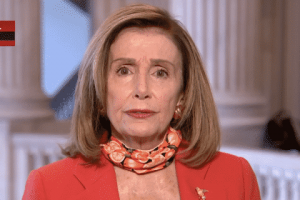 The House speaker, during an MSNBC interview on Wednesday, called the first presidential debate a “sad night for our country” and blasted Trump for not disassociating himself from white supremacist and militia groups, as she put it.

“I lost a lot of sleep last night over that one fact,” Pelosi said.

She continued to declare that Trump has “never respected the dignity of his office and he demonstrated that last night.”

More news about Race and Racism

Despite a federal judge’s order that the government reunite families who had been separated at the United States-Mexico border under the Trump administration’s...

In 2014, I was part of an activist organization that worked across various social issues—education equity, economic justice, labor rights, and environmental...

How to Build a Multiracial Movement
OPINION

In 2014, I was part of an activist organization that worked across various social issues—education equity, economic justice, labor rights, and environmental...

Use of slurs not ‘isolated’ at Louisiana State Police

BATON ROUGE, La. (AP) — A Black trooper with the Louisiana State Police was on a break when his cellphone buzzed with an unusual voice message. It was from a...

In the 90 days following the death of George Floyd while in the custody of Minneapolis police, mainstream magazines celebrated Blackness on their covers about...

Did Amy Coney Barrett Say “Being Called the N-Word Does Not Constitute a Hostile Work Environment”?
FACT CHECK

Benjamin Watson has been a regular speaker at prominent events like the March for Life for years, but Divided Hearts of America is the soft-spoken NFL star’s...

'Where Would the Black Lives Matter Movement Be Without the Right To Free Speech?'

Not All Identities Are Created Equal
OPINION

In 2020, much of the public discussion of social issues revolves around notions of identity. Ideas about race, reformulations of gender, and considerations of...

In Minneapolis, Rage And Fear Have Hobbled A Great American City
ANALYSIS

The one-two punch of riots over George Floyd’s death and shutdowns over the pandemic have taken a terrible toll on the City of Lakes. The intersection in...