After China imposed internet censorship laws in Hong Kong last week, Secretary of State Mike Pompeo said Monday that the White House is looking into banning media applications from China, including popular video sharing application TikTok. Pompeo told Fox News that people should only download it “if you want your private information in the hands of the Chinese Communist Party.” TikTok responded to Pompeo's comments Tuesday stating they had never shared any information with the Chinese government; in light of the new laws, TikTok's parent company ByteDance is looking to move its headquarters out of Hong Kong.

Coverage from both the left and right noted that TikTok's switch comes amid escalating tensions over security and privacy between China and U.S. social media sites who refuse to hand over their Hong Kong user data. Some right-rated outlets said ByteDance "[showed] principle" by moving their headquarters and refusing to give over information. 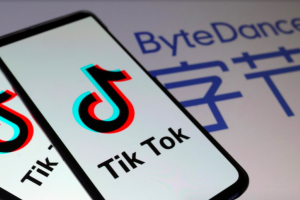 (Reuters) - ByteDance is looking to make changes to the corporate structure of its short video app TikTok, a company spokesperson said on Thursday.

TikTok is also in early stages to establish its headquarters, according to a source familiar with the management’s thinking. The company’s five largest offices are in Los Angeles, New York, London, Dublin and Mumbai, it previously said.

Trump is coming for your TikToks.

According to Secretary of State Mike Pompeo, the administration is “looking at” the possibility of banning a range of Chinese apps, including the hugely popular video-sharing app.

TikTok, which was downloaded 315 million times in the first three months of the year, has long been a source of national security concern for U.S. politicians, and now the Trump administration says it’s seriously considering banning the app.

Viral video platform TikTok’s withdrawal from Hong Kong is a savvy commercial move that sidesteps thorny privacy issues but it will not shield the app completely from accusations of collusion with China, experts say.

As Facebook, Twitter and other US tech giants risk angering China by refusing to share Hong Kong user data, Chinese-owned TikTok has also portrayed an image of principle by pulling out of the territory.

More than 100 Politico staffers have reportedly signed a letter to publisher Robert Allbritton over the decision to allow right-wing firebrand Ben Shapiro...