The Supreme Court heard arguments on Wednesday for a case challenging which branches of state government have regulatory authority over elections.

For Context: North Carolina Republican legislature constructed a new electoral district map that the North Carolina Supreme Court struck down, believing it to be gerrymandered and biased against democratic voters. The legislators are challenging this decision before the United States Supreme Court. Outlets across the spectrum are highlighting the constitutional theory behind the challenge, the “independent state legislature” doctrine, which argues the Constitution grants legislatures, not courts, the authority to determine electoral maps and regulate federal elections.

What the Constitution Says: The theory stems from an interpretation of Article I, Section 4 of the United States Constitution, which states that “The Times, Places and Manner of holding Elections for Senators and Representatives, shall be prescribed in each State by the Legislature thereof; but the Congress may at any time by Law make or alter such Regulations, except as to the Places of chusing Senators.”

How the Media Covered It: Reuters stated that the court’s conservative justices “appeared willing” to embrace independent state legislature theory, but had reservations regarding parts of the Republican legislators’ argument. CBS News attributed the resurgence of the theory to false claims of electoral fraud made by former President Donald Trump during the 2020 election. The New York Post characterized some justices as appearing “skeptical” of granting “unchecked power” to state legislatures. Fear of increased partisan gerrymandering is a common point in coverage across the spectrum.

The Supreme Court on Wednesday weighed a blockbuster redistricting case from North Carolina involving whether state legislatures have near exclusive power to set federal election rules with no review by state courts, a dispute that brought stern warnings of the disruptions such an idea could cause to elections nationwide and the unchecked power it could give to state lawmakers.

Known as Moore v. Harper, the case stems from the redrawing of the congressional map by North Carolina's GOP-led legislature in the wake of the 2020 Census, which was struck down by the... 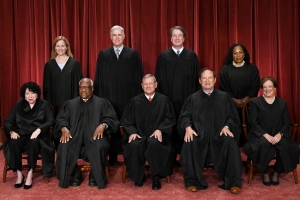 The Supreme Court heard arguments Wednesday over whether state legislators should have the power to set voting rules in presidential and congressional elections without oversight from state courts — an argument which could have major implications for the 2024 election and beyond.

The case brought by North Carolina Republicans seeks to check the power of state courts to block gerrymandered congressional districts drawn up by state lawmakers.

The result would give legislatures wide latitude to control the “times, places and manner” of federal elections — potentially allowing maps to be drawn for... 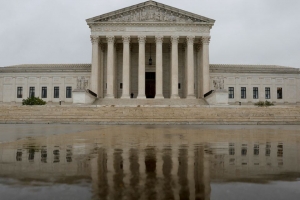 The U.S. Supreme Court's conservative majority on Wednesday appeared to ready to limit judicial power to overrule voting policies crafted by state politicians but might not go as far as Republican North Carolina lawmakers want in a case the liberal justices painted as a threat to American democratic norms.

The court heard arguments in a case the state lawmakers have used to try to persuade the justices to endorse a contentious legal theory gaining traction in conservative legal circles that would prevent state courts from reviewing the legality of actions...

News and Information about Supreme Court
Go ad-free! Support AllSides.
About these ads