President Joe Biden had harsh words for "MAGA Republicans" and described the 2022 midterm elections as a "battle for the soul of the nation" in a speech from Philadelphia Tuesday night.

In the 24-minute speech, Biden accused former President Donald Trump and his supporters of trying to create a country "where there is no right to choose, no right to privacy, no right to contraception, no right to marry who you love." He said that "equality and democracy are under assault," and that "Trump and the MAGA Republicans represent extremism." See a transcript here.

House Republican leader Kevin McCarthy delivered a "prebuttal" speech to Biden's on Thursday, accusing him of launching "an assault on the soul of America, on its people, on its laws, on its most sacred values."

The speech was the top story from major news sources across the political spectrum. Left- and center-rated sources focused on Biden's criticisms of Republicans, and many contrasted those remarks with his stated goal of fostering unity in his inaugural address. NewsNation said Biden's speeches "have recently taken a more partisan tone." The Associated Press said the speech's tone "marks a sharp turn for the president." Right-rated sources focused more on angles that portrayed the speech in a negative light and voices that accused Biden of advocating divisiveness. The Washington Examiner highlighted commentators who critiqued the speech's "hellish red background," and the New York Post (Lean Right bias) highlighted a heckler who repeatedly cursed at Biden. 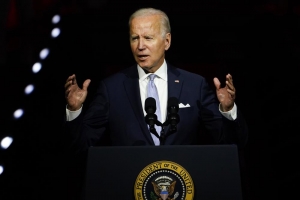 President Joe Biden warned Thursday night that “equality and democracy are under assault” in the U.S. as he sounded an alarm about his predecessor, Donald Trump, and “MAGA Republican” adherents, labeling them an extremist threat to the nation and its future.

Aiming to reframe the November elections as part of a battle for the nation’s soul — “the work of my presidency,” Biden used his prime-time speech at Independence Hall in Philadelphia to argue that Trump and “Make America Great Again” allies are a challenge to nation’s system of government,... 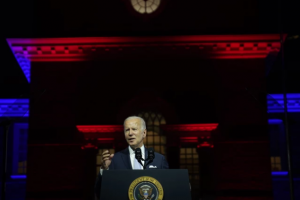 When President Joe Biden delivered a prime-time address in Philadelphia on Thursday, the dark red setting generated a great deal of buzz.

Biden's speech, in which he framed November's midterm elections as a continuation of his 2020 cycle's "battle for the soul of the nation" and portrayed MAGA forces, perpetuated by former President Donald Trump and his allies, as being "determined to take this country backwards," was delivered outside Independence Hall.

Biden, who walked in with first lady Jill Biden, was framed on either side by a standing Marine and red lights cast upon a brick wall... 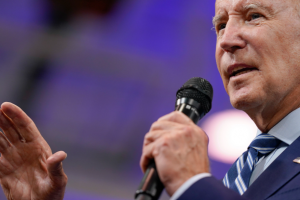 President Joe Biden addressed the country Thursday night from Philadelphia with a prime-time speech billed as the “Soul of the Nation.”

While in the birthplace of the Declaration of Independence, the president talked about what he believes to be America’s core values and how to fight for them. He also sounded an alarm, saying he sees threats to democracy, and adding that both equality and democracy are under assault.

“For a long time, we’ve reassured ourselves that American democracy is guaranteed. But it is not. We have to defend it. Protect it. Stand... 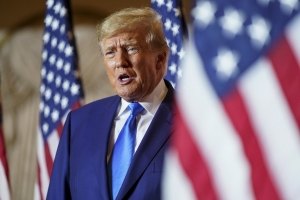