On Tuesday, Epstein's former pilot testified that high-profile people such as former Presidents Donald Trump and Bill Clinton, actor Kevin Spacey, and the Royal Family's Prince Andrew were on Epstein's private plane at some time. On Wednesday, an accuser known as "Jane" said she was introduced to Trump when she was only 14, claimed she once flew on Epstein's plane with and Prince Andrew, and detailed how Maxwell and Epstein allegedly abused her numerous times. On Thursday, Epstein's former Palm Beach property manager described the "many, many, many" females Epstein had at the estate, including some who appeared underage, and detailed Epstein and Maxwell's strict rules about access and privacy. Maxwell faces a six-count indictment for criminal sexual activity; she has pleaded not guilty to all charges and proclaimed her innocence.

Outlets across the spectrum covered the news throughout the week, but not as prominently as COVID-19, the economy and other ongoing stories. Some reports from left- and center-rated sources highlighted the claims about Trump. Some coverage from right-rated outlets focused more generally on the shadiness of Epstein's operation, as well as he and Maxwell's predatory behavior. 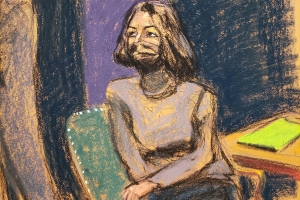 The late financier Jeffrey Epstein had "many, many, many" female guests at his Palm Beach estate, including two who appeared to be underage, a former employee testified at British socialite Ghislaine Maxwell's sex abuse trial on Thursday.

Juan Alessi, the Palm Beach house manager, took the stand for the prosecution on the fourth day of Maxwell's trial in Manhattan federal court. He said he repeatedly drove two girls who appeared to be 14 or 15 to Epstein's Florida estate. 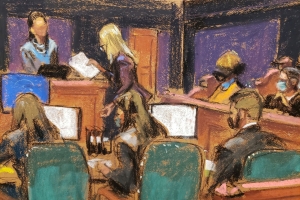 One of the four women who say they were “groomed” for sex by Ghislaine Maxwell testified Wednesday that the disgraced financier Jeffrey Epstein took her to meet Donald Trump when she was just 14.

Testifying at Maxwell’s trial in New York City, the woman, who is being identified by the pseudonym Jane, said on cross-examination that she met the future president in the 1990s at Mar-a-Lago, his resort in Palm Beach, Florida.

Jane didn’t allege any improper behavior by Trump and didn’t go into further detail about why she was at the resort.

Jeffrey Epstein's former Palm Beach property manager testified Thursday that Ghislaine Maxwell had a 58-page handbook that warned employees: "Remember that you see nothing, hear nothing, say nothing, except to answer a question directed at you."

Juan Alessi, who worked for the disgraced financier from 1990 to 2002, told jurors that Maxwell controlled every aspect of Epstein's Florida estate and that she issued "a tremendous amount" of rules, which included avoiding eye contact with the alleged pedophile.

"Mr. Epstein doesn't like to be looked at in his eyes," Alessi said Maxwell told him....