The trial of Ghislaine Maxwell, associate of the late billionaire sex offender Jeffrey Epstein, will begin with opening arguments next Monday.

Maxwell is accused of facilitating Epstein's sexual abuse of minors. She was arrested in July 2020 and charged with enticing a minor to travel to engage in criminal sexual activity, transporting a minor with the intent to engage in criminal sexual activity, conspiracy to commit both of those offenses, and perjury in connection with a sworn deposition. Maxwell faces up to 80 years in prison if convicted; she maintains her innocence and has denied all charges. One of Epstein and Maxwell's accusers, Virginia Giuffre, also claims she had sex with Prince Andrew of the Royal Family while she was underage and is expected to testify against Maxwell. Jury selection for the trial began Tuesday.

The news hasn't been covered very prominently across the spectrum. Some voices on social media, especially from the right, have accused purportedly biased media outlets of focusing on the Kyle Rittenhouse trial and other stories instead of Maxwell's trial.

Ghislaine Maxwell: Brother Ian says she will not get fair hearing at trial
BBC News 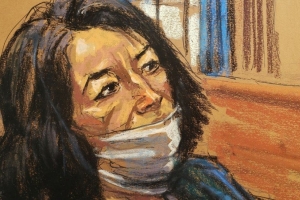 Ghislaine Maxwell's brother, Ian, has said he doubts his sister will get a fair hearing at her trial on sex trafficking and other charges which is due to start next week.

Ms Maxwell, the daughter of the late media mogul Robert Maxwell, has been accused of trafficking minors for her former lover Jeffrey Epstein.

She has been in a New York jail since her arrest in July 2020.

The former socialite has pleaded not guilty to all charges.

"I think my sister's probably relieved finally that it is starting because...

Ghislaine Maxwell, a known associate of Jeffrey Epstein, is attempting to gain access to documents in a settlement fund for the convicted pedophile's victims.

Jordana Feldman, the administrator of the Epstein Victims’ Compensation Program, filed a letter in court Friday obtained by the Daily Beast that said she intends to "quash defendant Maxwell’s subpoena directed to her.”

The document request comes two weeks before Maxwell's criminal trial which aims to shed light on the role she allegedly played in Epstein's sex-trafficking scheme. According to her accusers, she was the procurer of the...

For those following the Jeffrey Epstein story, the past two years have felt like driving around a curve that never ends. Answers to the key questions at the heart of the vast scandal have seemed tantalizingly close and frustratingly out of reach. How did the late pedophile earn his estimated half-billion-dollar fortune? Which powerful men participated in his sex-trafficking ring? What about all those surveillance videos from inside his homes? On November 29, lawyers are set to deliver opening statements in the highly anticipated trial of Epstein’s alleged accomplice Ghislaine Maxwell. For...

News and Information about Justice
Go ad-free! Support AllSides.
About these ads