A surge of travelers and an ongoing flight staffing shortage led to thousands of flight cancellations and delays ahead of 4th of July weekend.

Some in the airline industry reportedly called the surge “airmageddon.” According to flight tracker FlightAware, there were over 2,600 cancellations on Thursday and over 2,800 cancellations on Friday, with over 25,000 delays each day. The surge in travelers came on the back of industry-wide staffing disruptions; on Thursday, over 1,200 Delta Airlines pilots in several major cities picketed to call for higher pay and an “industry-leading contract.”

Transportation Secretary Pete Buttigieg met with airline CEOs on June 18 to discuss the industry’s issues. On Wednesday, Sen. Bernie Sanders (I-Vt.) called on Buttigieg to take “immediate action,” on the issue, including by requiring refunds for flights delayed over one hour and by imposing fines on airlines for “scheduling flights that they are unable to properly staff.”

Coverage was widespread and mostly balanced across the spectrum throughout the week. Left-rated outlets like NPR (Lean Left bias) were more likely to cover labor issues at airlines. 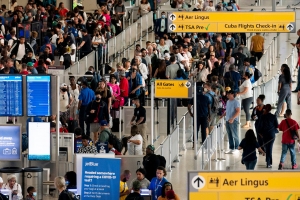 More people flew out of airports in the United States on Sunday — 2.46 million according to the Transportation Security Administration — than on any other day so far this year. The Fourth of July holiday is expected to be even busier, with Hopper, a travel booking app, predicting that nearly 13 million passengers will fly to, from and within the United States this weekend.

The question for many travelers is whether they can trust airlines to get them where they want to go on time.

Read full story
Some content from this outlet may be limited or behind a paywall.
See full media bias rating for New York Times (News)
From the Center
302
Economy and Jobs
Travel nightmare looms over July 4th weekend
Axios 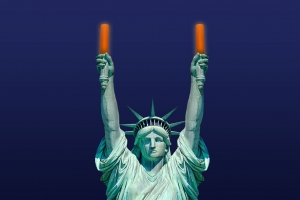 Independence Day weekend is expected to be the second busiest for travel since 2000, with flight delays, cancelations and staffing woes.

Why it matters: It's a sign that the summer of "revenge travel" is upon us, with Americans splurging on travel and enduring delays to make up for pandemic-related cancellations.

The big picture: Airlines from coast to coast have been bracing for "operational challenges" this weekend, with some even encouraging customers to rebook their plans for another weekend.

Hundreds of flights were delayed or canceled Friday amid airline staff shortages and protests, as the Fourth of July travel rush got underway.

There were already more than 1,870 flight delays and 270 cancellations — well above the daily average of 210 scrapped flights — domestically as of noon Friday, according to the airline tracking service FlightAware.

More than 48 million people were expected to hit the road for the holiday weekend as airlines struggled to keep up with the soaring summer travel demand.

The number of available pilots and flight attendants along with sky-high fuel costs — which...