Dr. Martin Tobin, a pulmonologist called as a prosecution witness in Derek Chauvin's murder trial, testified on Thursday that George Floyd died from a lack of oxygen caused by being handcuffed face down in the street with the former Minneapolis police officer's knee on his neck. Chauvin's defense team has maintained that Floyd was addicted to narcotics and that he ingested fentanyl, a substance the team said contributed to his death.

Tobin testified as Chauvin's trial enters a new technical phase, with prosecutors expected to call a string of medical experts to testify about how Floyd died in police custody. Chauvin is facing murder and manslaughter charges. 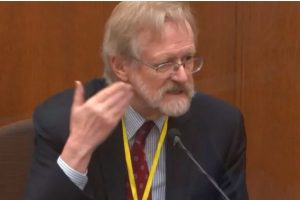 Tobin is appearing as an expert witness for the prosecution. He said the state asked him to review documents and videos depicting the circumstances of Floyd's death. Tobin watched some of those videos hundreds of times, he said.

"Have you formed an opinion to a reasonable degree of medical certainty on the...

A pulmonologist who reviewed George Floyd's medical records said Thursday he died "from a low level of oxygen."

Dr. Martin Tobin, a physician specializing in critical care of the lungs, posited that Floyd's prone position in the street and pressure on his neck and back led to a pulseless electrical activity arrhythmia "that caused his heart to stop." Floyd died May 25, 2020, in Minneapolis police custody, and his death sparked nationwide protests against police brutality.

"Mr. Floyd died from a low level of oxygen," he said.

Testimony in the trial of former Minneapolis police officer Derek Chauvin continued Thursday with a breathing expert saying that George Floyd died due to a “low level of oxygen” that caused brain damage, rebuking the defense’s argument that drugs contributed to Floyd’s death. Martin Tobin, a pulmonologist and national breathing expert from Hines, Ill., offered testimony as an unpaid witness that Chauvin’s knee was on Floyd’s neck for the “vast majority of the time” and that the pain from the pressure applied by the officer to Floyd was comparable to...

At Chauvin trial, expert says Floyd died from ‘low level of oxygen’ after officer had knee on neck

Testimony in the trial of former Minneapolis police officer Derek Chauvin continued Thursday with a breathing expert saying that George Floyd died due to a “...

Chauvin's use of force on George Floyd was 'in no way' policy, says police chief

The Minneapolis police chief, Medaria Arradondo, told the Derek Chauvin murder trial on Monday that he “vehemently disagrees” that there was any justification...

The opening days of Derek Chauvin's murder trial have included gripping testimony and evidence -- whether it's been reliving the moments that led to George...

More than a year after police officers killed Breonna Taylor in a botched forced-entry raid, the Kentucky legislature voted Tuesday to pass a law that would...

Dr. Martin Tobin, a pulmonary specialist who works in critical care, testified Thursday that George Floyd died from a lack of oxygen, bolstering the...

Lt. Johnny Mercil, who has been in charge of teaching the use of force in the Minneapolis Police Department's training division, says former officer Derek...

The Minneapolis doctor who attended to George Floyd testified Monday that it's more likely Floyd died of loss or deprivation of oxygen than of a heart attack...

Emotional eyewitness accounts, lots of video: Here's what we learned in the first week of...

That's a wrap on the first week of witness testimony in the murder trial of former Minneapolis police officer Derek Chauvin, charged in the death of George...

George Floyd died from low oxygen levels while being restrained by ex-Minneapolis cop Derek Chauvin — and a healthy person would have suffered the same fate if...

The trial of former cop Derek Chauvin for the murder of George Floyd has left Minneapolis “on edge,” Rep. Ilhan Omar said Sunday. During an appearance on...