Breaking Down Biden's State of the Union Speech

President Joe Biden gave his first State of the Union address Tuesday night amid Russia's invasion of Ukraine, high inflation, and low public approval ratings ahead of the 2022 midterm elections.

Biden concentrated on the Russia-Ukraine conflict, and said his administration is banning Russia from American airspace. He said U.S. troops would not engage in a conflict with Russian forces, but would "defend every inch of the territory that is NATO territory" in Europe. Biden also said Russian President Vladimir Putin "badly miscalculated" and that "when dictators do not pay a price for their aggression, they cause war and chaos." The president entered the chamber without a mask, and said that recent pandemic progress means "Covid-19 need no longer control our lives." Biden also took a stance against 'defund the police,' saying the "answer is to fund the police with the resources and training they need to protect our communities."

Sources across the spectrum highlighted how Biden's support for Ukraine inspired bipartisan unity in the chamber. Some coverage from left-rated outlets said Biden wasn't critical enough of certain Republicans for their role in the Jan. 6 Capitol riot or their purported support of Putin. Outlets on all sides, especially on the right, highlighted how Biden mistakenly said Putin would never gain the hearts and souls of "Iranian people" instead of Ukrainian. Some coverage from right-rated sources argued that Biden wasn't emphatic enough about condemning Russia and China or addressing domestic issues like inflation and immigration. 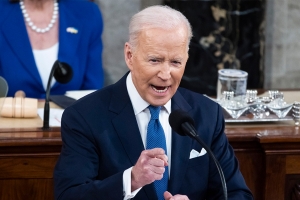 Former speechwriters and communications experts for top elected officials and cabinet secretaries weighed in on Biden's first State of the Union address Tuesday evening, praising the president for his strong support of Ukraine amid Russia's multi-front invasion, but criticizing it for being lackluster and uninspiring.

Biden's speech marked the most consequential of his lifetime as U.S. inflation soars and Eastern Europe devolves into war between Russia and Ukraine. Many members of Congress attending the speech were wearing small lapel ribbons of blue and yellow to show solidarity with the people of Ukraine. 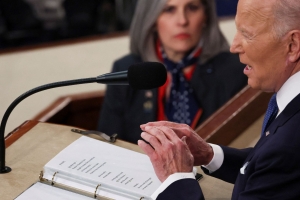 President Biden set his sights at the State of the Union on Russian oligarchs, COVID fraudsters, social media platforms and even defund-the-police efforts — populist targets in a broader speech about national and global unity.

Why it matters: Biden's anti-Russia, pro-Ukraine passages inspired the only real partisan unity in the chamber.

"The U.S. Department of Justice is assembling a dedicated task force to go after the crimes of Russian oligarchs. We are joining with our European allies to find and seize your yachts, your luxury apartments, your private jets. We... 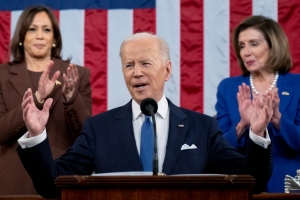 President Joe Biden delivered his first State of the Union address on Tuesday night, a speech that came amid Russia's invasion of Ukraine and lagging poll numbers in advance of the 2022 midterm elections.

I watched the speech -- and the reaction to it -- and jotted down some of the best and the worst of the night.

Ever since Ronald Reagan first invited honored guests to the State of the Union, it's been an opportunity for presidents to strike memorable moments in a speech that often feels like a laundry list...