President Joe Biden clarified on Tuesday that his remarks on the U.S. militarily defending Taiwan against China would not change the U.S. policy of “strategic ambiguity” on the issue of Taiwanese independence.

When a reporter asked Biden on Tuesday if strategic ambiguity was “dead,” Biden replied, “No.” When asked to explain, Biden responded, “No,” later adding, “The policy has not changed at all. I stated that when I made my statement yesterday.”

Biden told reporters on Monday that his administration’s Taiwan policy “has not changed” and that the U.S. agreed with the “one China” policy. However, when asked if the U.S. “would be willing to defend Taiwan militarily,” Biden replied, “Yes. That’s the commitment we made.” Many took his comments as an “apparent U.S. policy shift,” prompting White House officials to assert to the media that Biden’s remarks were not a departure from the policy of strategic ambiguity.

Coverage across the spectrum highlighted that this was not the first time the White House had “walked back” comments by Biden on Taiwan. A New York Times (Lean Left bias) article said offhand remarks had become “a feature of the Biden presidency” that left “staff scrambling to spin them away.” Coverage from the right portrayed the walk-back somewhat more negatively; a New York Post (Lean Right bias) news article began with the phrase, “Who’s in charge here anyway?” 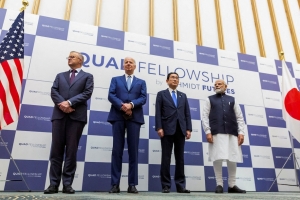 President Biden stressed Tuesday that his policy toward Taiwan had not changed, one day after forcefully pledging — as he has done before — that the United States would defend the island if it came under assault by neighboring China.

At a meeting here of leaders from the United States, India, Australia and Japan, Biden was asked to elaborate on his unequivocal remarks that were an apparent change to long-standing U.S. policy of deliberately staying unclear about what it would do in such a scenario, a principle known as “strategic...

Read full story
Some content from this outlet may be limited or behind a paywall.
See full media bias rating for Washington Post
From the Center
12538
Joe Biden
Biden says his Taiwan comments don’t reflect a change in U.S. policy after drawing ire from China
CNBC 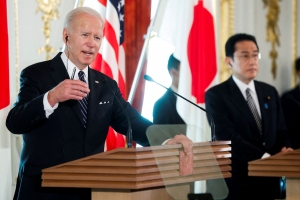 President Joe Biden insisted Tuesday that the U.S. hasn’t changed its strategic policy on Taiwan, a day after he angered Beijing when he said his administration would be willing to use military force to defend the island.

Biden met with leaders from Japan, India and Australia at their second so-called Quad Leaders’ Summit, which wrapped up Tuesday in Tokyo.

The U.S. president startled many of the delegates when he suggested Monday that the U.S. could deploy American troops on the island should China invade. When asked by a reporter if he “was willing to...

Read full story
Some content from this outlet may be limited or behind a paywall.
See full media bias rating for CNBC
From the Right
12538
Joe Biden
Biden keeps saying US will defend Taiwan — and White House keeps walking it back
Washington Examiner

President Joe Biden appearing at odds with his administration for the third time regarding China and Taiwan reverberated around Washington and Beijing.

Despite the White House trying to downplay the differences, Biden intentionally or unintentionally renewed the foreign policy debate over "strategic ambiguity" in the Taiwan Strait at a time when U.S.-China relations are at a nadir and Russia wages war in Ukraine.