Biden Pledges to Defend Taiwan if China Were to Invade

At a news conference in Tokyo on Monday, President Joe Biden pledged to intervene militarily if China were to invade Taiwan. The United States has traditionally avoided making such a guarantee to Taiwan, and instead has abided by the Taiwan Relations Act, which states that the U.S. must provide Taiwan with the means to defend itself. The White House is insisting that President Biden's statement is not a departure from policy, and that the U.S. will continue to acknowledge China's position that there is only one Chinese government.  Many in the media, however, noted the forcefulness of Biden's statements in support of self-governing.

Biden also criticized China for flying their fighter jets so close to Tawin's airspace, while stating that he does not expect China to invade Taiwan. He linked his comments to Russia's invasion of Ukraine, saying that such a unilateral attempt to change the status quo by force - such as Russia's attack against Ukraine - should not be tolerated in Asia. 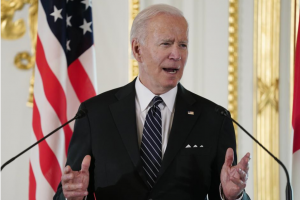 President Joe Biden said Monday that the U.S. would intervene militarily if China were to invade Taiwan, saying the burden to protect Taiwan is “even stronger’ after Russia’s invasion of Ukraine. It was one of the most forceful presidential statements in support of self-governing in decades.

Biden, at a news conference in Tokyo, said “yes” when asked if he was willing to get involved militarily to defend Taiwan if China invaded. “That’s the commitment we made,” he added.

The U.S. traditionally has avoided making such an explicit security guarantee to... 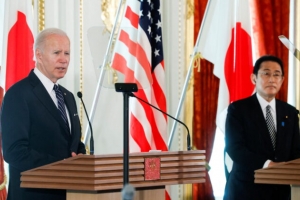 U.S. President Joe Biden reiterated his country’s support for Taiwan, saying on Monday that his administration is willing to defend Taiwan with force if there is an attack by China’s communist party (CCP) on the mainland.

When a reporter asked whether Biden would be “willing to get involved militarily to defend Taiwan if it comes to that?” during the May 23 press conference in Tokyo, he replied with a flat “Yes.”

Biden then added, “It’s the commitment we made. Look, here’s the situation. We agree with a ‘One China’ policy, we’ve...

Read full story
Some content from this outlet may be limited or behind a paywall.
See full media bias rating for The Epoch Times
From the Center
314
World
Biden vows to defend Taiwan in apparent US policy shift
BBC News 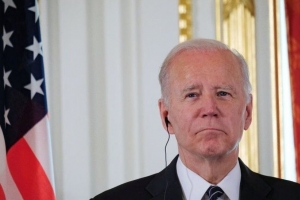 US President Joe Biden has warned China is "flirting with danger" over Taiwan, and vowed to intervene militarily to protect the island if it is attacked.

Speaking in Japan, he appeared to contradict long-standing US policy in the region, although the White House insisted there had been no departure.

Mr Biden drew a parallel between Taiwan and Russia's invasion of Ukraine, prompting an angry rebuke from Beijing.

He is on his first tour of Asia as US president, visiting regional allies.

Mr Biden prefaced his remarks saying US policy toward...