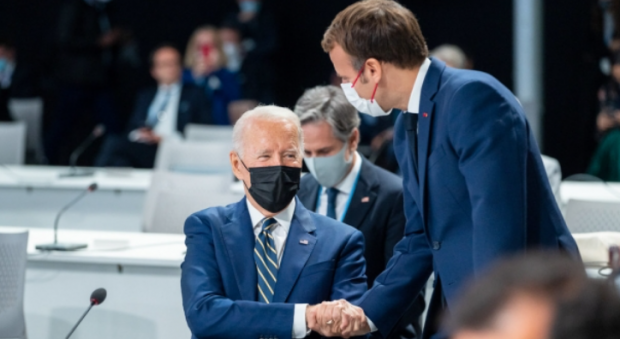 It’s been awhile since a U.S. President has had an international bromance that we can be proud of.

Donald Trump’s closest relationships on the world stage ranged from peculiar (Boris Johnson) to alarming (Kim Jong-un) to downright dangerous (Vladimir Putin). Barack Obama’s emotional diffidence kept him from establishing close personal relationships with the leaders of even our nation’s most reliable global allies. We’d have to go back to the era of Bill Clinton and both George Bushes to be reminded of the benefits of a strong friendship between our president and his counterparts from other world powers.

When French President Emmanuel Macron visited Washington, D.C. last week, it was clear throughout his trip how close he and President Joe Biden have become. We saw firsthand the political benefits that arise when two international leaders develop such an intimate personal affinity. Their relationship has helped the U.S. and France keep its alliance on track through both misunderstandings and substantive disagreements. It has helped guide the West through a coordinated response to Putin’s invasion of Ukraine. Hopefully, it can be sufficient to help steer us through our next threat, which is one we are in the process of bringing on ourselves and blissfully unaware of the potential consequences.

The relationship between Biden and Macron got off to an inauspicious start. The new administration’s failure to communicate with France on both the president’s decision to withdraw U.S. troops from Afghanistan and a deal with Australia to purchase American submarines that undermined an existing Australia-France defense contract did not bode well for the nations’ efforts to rebuild their relationship after the unpredictability of the Trump presidency. At the same time, Macron’s public statements about the need for greater European independence from the U.S. did not sit well in Washington.

But their mutual need to cooperate in the defense of Ukraine against Russian aggression this year forced Biden and Macron to form a relationship out of necessity, and while the two men have not always marched in lockstep on how to navigate the crisis, their close coordination has allowed the West to present a unified front against Putin, to the immeasurable benefit of Ukraine’s war effort. Their good cop/not-quite-so-good cop partnership has allowed them to keep a line of communication open with the Russian leader even while standing firmly against his aggression.

The benefits of the Biden-Macron friendship were evident throughout the French president’s time in the U.S., and no moreso than when they talked about their joint commitment to Ukraine. But at several other instances during Macron’s trip, it was clear that the war effort was overshadowing festering tensions between the two nations – and the two men. In fact, it was one of Biden’s hallmark domestic policy achievements, the Inflation Reduction Act, that is causing that discord and neither leader seems inclined to back down to keep the situation from worsening.

Biden wants the U.S. to dominate production of electric cars, semiconductors and green technology, partly out of a desire to compete with China.  France and other U.S allies are upset because the IRA's big tax breaks for parts used in electric vehicles and renewable energy products apply only if they're produced in North America.

French officials say that will further disadvantage European companies already contending with sky-high operating costs due to Europe's energy crunch, and disincentivize companies from basing their production in Europe. In a press conference alongside Macron, Biden said those were "glitches" in the legislation that could be "ironed out." But that would require action from Congress, which looks unlikely. Macron said it's now up to Europe to "synchronize" its approach with America's, an apparent endorsement of similar subsidies for European industry. Which sounds a lot like the next step to an all-out trade war, which is not exactly what a teetering global economy needs.

While the backlash to the IRA has not interfered with European resolve toward Ukraine, the potential geopolitical downside is even greater on the Pacific Rim, where South Korea, Taiwan and Japan have expressed their concern about how these trade disagreements could interfere with their cooperation with the U.S. on confronting China.

Biden’s relationship with the leaders of these countries is not nearly as close as his friendship with Macron, and the American pivot to Asia is now decades overdue. But our country’s growing bipartisan fondness for isolationism is poised to cause great problems with our friends at a time when our enemies are most likely to benefit.