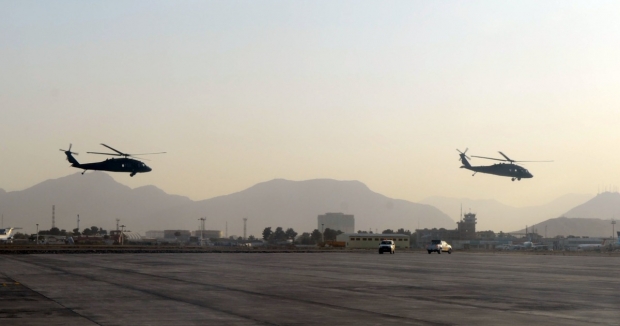 U.S. helicopters in Kabul, Afghanistan in 2013.

There was once a time when America put aside its differences in the face of crisis. During wartime, during natural disasters, and after acts of unconscionable terrorism, all but the most virulent partisans and outliers would  be able to put aside their ideological differences (at least temporarily) to come together toward a common goal or to defeat a common enemy. The term that’s been commonly used is “rallying around the flag.”

But perhaps it’s time to put that saying aside, as a dated and useless remnant of a less polarized and less angry era.

I write this only hours after the tragedy at the Kabul airport in Afghanistan where an attack by Islamic terrorists killed thirteen U.S. service members, dozens of Afghani citizens and wounded scores of others. The smoke had literally not cleared before verbal missives begin flying toward President Joe Biden and his administration for the way they have mishandled our country’s rushed and haphazard withdrawal from Afghanistan.

There’s no question that the evacuation was badly flawed, and Biden and his military advisors have received harsh and deserved criticism from normally supportive voices both here and around the world over the last several days. But now, a catastrophe such as the airport murders ought to be enough to encourage the critics to stand down even for a short period of time, if only to send a message of strength and unity to the rest of the world.

But such sentiments have apparently become relics, an old-fashioned reminder of the way our country once stood together when confronted with seemingly overwhelming challenges. I don’t look at the past through rose-colored glasses: I recognize that bitter ideological divisions never fully vanished no matter how daunting the obstacle in our path. But we used to do a better job of briefly setting those divisions aside before resuming our partisan quarrels.

I tell my students about Ronald Reagan and Tip O’Neill working together to save Social Security from bankruptcy. I tell them about Bill Clinton and Newt Gingrich teaming up to balance the federal budget and institute sweeping changes in trade and welfare policy. They don’t doubt that my tales of a bygone era are true, but many of these intelligent and civically-minded young people see them as a historical irrelevancy. I might as well be telling them about my compact disc player or my favorite blacksmith.

Politics is no more vitriolic today than during earlier periods of American history. But the leaders I talk about – and so many others – were capable of working together when adversity demanded even while knowing that the nasty partisan warfare would return before too long. Biden appealed to these sentiments during his campaign last year, and has called for such bipartisanship at regular intervals throughout the first months of his presidency. We’ll see in the days and weeks ahead if that type of cooperation can be achieved in the wake of a horrific terrorist attack any more successfully than during ongoing battles over climate change, immigration or police reform.

The Kabul attacks are not the equivalent of September 11. Rather, they echo the suicide bombing of the U.S.S. Cole in 2000 and possibly the World Trade Center bombing of 1993, pre-9/11 warnings that most of us did not take as seriously as we should have. It took that much more devastating loss in 2001 to shake us out of our complacency, to a point where most of the country supported a war in Afghanistan.

As I wrote last week, that resolve and unity was only fleeting. But at least it existed long enough for us to come together – for awhile — toward shared national goals. By contrast, Biden had not even addressed the nation about the current tragedy before Republicans began calling for his resignation. Even some fellow Democrats were offering barbed criticism of his administration’s strategy.

Of course those criticisms need to be heard from both parties. Hard questions need to be asked and blame should be assigned where it is deserved. But does it have to be right now? Maybe we can mourn this horrible loss of lives and stand together to support our leaders as they prepare to confront these regenerated threats to our safety and security. Or maybe not.

The question now is this: will it require a calamity like 9/11 to bring us together to confront this renewed threat of radical Islamist terrorism? Or perhaps, twenty years later, our divisions are so deep that even that won’t be enough.