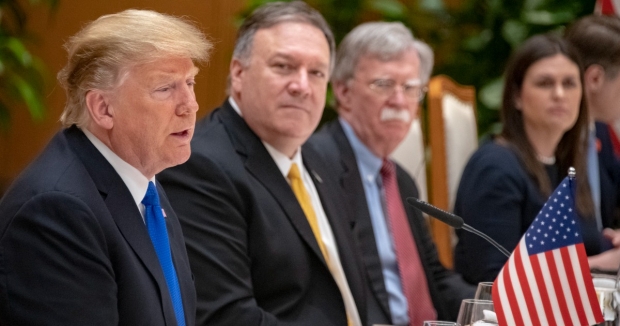 In recent weeks, I’ve written about divides within the Democratic Party over energy, immigration, police reform and any number of policy matters. But the disagreements among Democrats are actually fairly small to the large and growing chasm in the Republican Party about what exactly to do with Donald Trump.

Make no mistake, the former president is still by far the strongest political presence in his party. But his influence is unquestionably diminished since he left office fifteen months ago, and no one is quite sure what that shrinking impact will mean either this November or in the next presidential election two years from now. As a result, GOP candidates, strategists and potential 2024 presidential aspirants are all frantically attempting to calibrate how much of his power over the party grassroots remains intact and how to balance between the competing imperatives of embracing him to motivate the Republican base or distancing themselves from him to increase their prospects with swing voters.

Trump’s outsized influence is especially noticeable in Congress, where Republican leaders are careful not to upset or offend him, and in the back rooms of the 2022 midterm campaigns, where most House and Senate candidates work overtime to attract his support toward what they see as the key to success in contested GOP primaries. But there are also increased signs of hopefuls distancing themselves from him, of candidates potentially overcoming his opposition, and even some who are publicly – and harshly – criticizing him.

The race with the greatest national implications is the primary campaign for Wyoming’s lone House eat between embattled incumbent Representative Liz Cheney and Trump-backed challenger Harriet Hageman. The reason that Cheney is embattled, of course, is that she is battling Trump, who she has repeatedly blasted ever since his followers staged an insurrection at the U.S. Capitol last January. Cheney was one of ten Republican House members to vote to impeach Trump, she serves as the co-chair of the congressional investigation into the events of January 6 and has called Trump a “clear and present danger” to American democracy.

As you might guess, Trump is not a fan. After meeting with several potential Cheney opponents, Trump announced his support for Hageman, who has since been endorsed by dozens of Cheney’s House colleagues and has shot ahead in early polling for the state’s August primary. Cheney may have voted with Trump 93 percent of the time during his presidency, but deep-red Wyoming appears to be turning on her.

But pre-Trump Washington Republicans have not only stuck with Cheney, they are using this race as their first attempt to regain control of the party that Trump hijacked from them. Cheney’s father, former Vice President Dick Cheney, has mobilized Bush-era Republicans on his daughter’s behalf, and the GOP establishment has poured immense amounts of money into the campaign. Add in the fact that Wyoming has an open primary, which will allow Democrats and independents to cross over to vote for Cheney over her Trump-backed opponent, and it’s clear that the outcome of this one campaign could have an outsized effect on the 2024 presidential election and the party’s future for years to come.

Cheney is not the only scion of old-school Republicans who is pushing back against Trump. New Hampshire governor Chris Sununu, whose father held the same position back in the 1980’s before becoming George H.W. Bush’s first White House chief of staff, recently let loose with a scathing blast of Trump, suggesting that the former president was mentally imbalanced. Under the guise of a comedy routine at a dinner for Washington insiders, Sununu the younger did not hold back. “"He's f---ing crazy!, the governor said. “I don't think he's so crazy that you could put him in a mental institution. But I think if he were in one, he ain't getting out!"

That’s not the type of language that a party leader normally uses even to describe a political foe, and Sununu, who resisted strong pressure to run for Senate this year and is widely considered to be a potential 2024 presidential candidate, felt no need to apologize, clarify or otherwise back from his caustic remarks.

That potential campaign is still two years away. But over the next several weeks, Trump-backed primary candidates in campaigns in Georgia, Pennsylvania and North Carolina will be facing off against traditional mainstream opponents. By Memorial Day weekend, we will have a much better sense of to what degree this is still Donald Trump’s Republican Party.