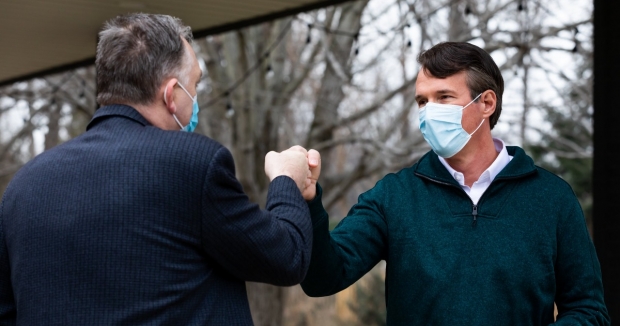 “In a war between Democratic progressives and Democratic moderates, the Republicans won.”

Former Congressman David Israel of New York, who was considered one of his party’s top strategists until his retirement a few years back, offered that assessment on the heels of the political earthquake that rocked Virginia last week. When Republican Glenn Youngkin unexpectedly defeated Democrat Terry McAuliffe in a campaign for governor of a state that had been assumed to be reliably deep blue, it set off aftershocks throughout the political universe. Joe Biden had won the state just one year ago by a comfortable ten point margin, and the GOP had not won a top-of-the-ticket statewide race there since 2009.

At the same time, Republicans came within a hair’s breadth of pulling off an even more extraordinary upset in New Jersey the same night, missing a chance to recapture the governor’s office in an even more heavily Democratic state that Biden carried by 16 points in 2020, falling just two percentage points short of knocking off incumbent Phil Murphy. Those types of rapid shifts don’t happen all that often in American politics, and portend potential catastrophe for Democrats in next year’s midterm elections.

Israel was one of a battalion of Democratic thinkers trying to make sense of the debacle, and laid the blame for his party’s problems at the feet of the battling factions in Congress who have been unable to pass Biden’s signature domestic policy priorities after months of internal squabbling. Both progressives and moderates seem to agree with the prognosis, and have now managed to put aside their differences to pass Biden’s infrastructure legislation. But deep rifts between the two sides remain on the president’s more ambitious social spending bills, and agreement still appears to be far away.

Even if Nancy Pelosi and Chuck Schumer do find a way to force a compromise, equally daunting disagreements still loom on no shortage of other policy fronts. If the fight over infrastructure and family leave looked ugly, just wait until the Democrats dig in deeper on the immigration, public safety, education and inflation policy brawls that are coming next. Those were the issues that Republican leveraged to their benefit last Tuesday, each highlighting both a split within the Democratic Party and the potential for Republicans to peel swing voters away in a post-Trump political era.

While the former president may very well decide to run again in 2024 and upend the political landscape yet again, he will not be running for office next year. And one of the lessons that the Democrats learned in Virginia and New Jersey is that running against Trump is much more difficult when he is not on the ballot. Both McAuliffe and Murphy worked hard to tie their GOP opponents to Trump, a tactic that had been extremely successful in the 2018 midterms. But while voters in these two states still think just as unfavorably of Trump now as they did a year ago, the fact that he is no longer in office means that their animosity toward the former president was much less intense – and much less relevant.

The voters who seemed most impacted by this new landscape are the suburbanites that Biden and Hillary Clinton had taken away from Trump during the last two presidential elections. The “defund the police” overreach that some Democrats employed in the aftermath of George Floyd’s death last year made it easy for the GOP to reclaim a public safety issue that has historically worked to their benefit. But less expected was the way that Youngkin recast the education policy debate in a way that drew many suburban parents to his side.

Education has been a winning issue for Democrats since… forever. The high octane arguments over Critical Race Theory and how topics like civil rights and race relations should be taught in public elementary and secondary schools drew most of the headlines in these debates. But it appears that the resentment that many parents harbor toward school administrators and teacher unions is an outgrowth from the prolonged school shutdowns that many families endured throughout the pandemic.

Youngkin was able to harness this anger on behalf of a nascent “parents’ rights” movement in his campaign and his victory ensures that this issue is not going away anytime soon. Democrats will need to find a way to reassure parents that their voices are being heard and that their concerns are taken seriously. But the disagreement within their party on this issue is going to make that strategy much more difficult than necessary to identify or implement.