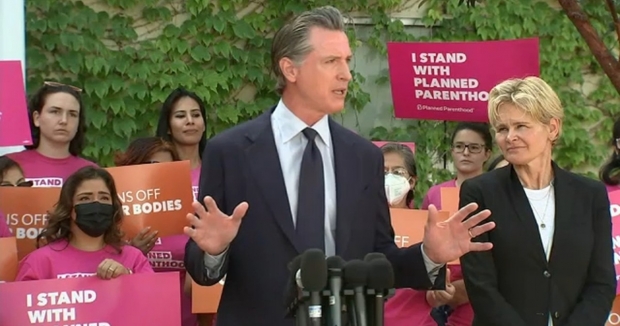 “Where is the Democratic Party? Where’s the party?…”, Newsom asked. “We need to stand up. Where’s the counteroffensive?”

Newsom was admonished for his impertinence by House Speaker Nancy Pelosi and other national Democratic leaders, who defended the actions they had taken in the debate over legal abortion. Let’s check-in to see how the fight has been going since then.

Three particularly notable events took place recently within a few days of each other, and together, they demonstrate the challenge the Democratic Party faces in its efforts to protect abortion rights – but also the challenges they are putting in their own path as they try to fashion a strategy to achieve that goal.

Schumer and the rest of his party’s leadership wanted a bill that would outlaw all limitations on abortions before viability and eliminate all current state-level restrictions, a more expansive version of the law than now exists. Pro-choice Republican Senators Susan Collins (R-ME) and Lisa Murkowski (R-AL) and pro-life Democrat Joe Manchin (D-WV) all indicated their willingness to vote for a version that reflects existing law on matters such as the so-called “conscience protections” for anti-abortion health care providers. Pro-choice Democrat Tim Kaine (D-VA) tried to work with Collins and Murkowski on such a compromise. Schumer said that he never even read their proposal.

But the alternative to a compromise is no bill at all. Most pro-choice advocates would prefer more ambitious legislation without any exceptions. But that is not going to happen under the Senate’s current makeup, and Schumer has made it clear that he would rather sacrifice any protections for legal abortion in order to have the abortion issue available to his candidates on the campaign trail this fall.

The day after the Senate ignored a proposal to preserve abortion rights because it wasn’t sufficiently ambitious, the House Pro-Choice Caucus distributed a memo to Democratic colleagues urging them to revise the language they should use in discussing abortion rights. The memo called for the word “choice” to be replaced instead with “decision”, discarded the long-time description of abortions as “safe, legal, and rare” in favor of the phrase “safe, legal and accessible”, and advised that laws that allow health care providers to deny abortion services based on religious beliefs should be called "refusal of care" or "denial of care" laws, rather than conscience clauses.

At a time when the Court’s decision makes the fight for the political center more important than ever, the end result is language that is more absolutist, less amenable to compromise, and more likely to turn away large numbers of voters who consider themselves pro-choice but not pro-abortion.

Two days later, abortion rights advocates gathered for hundreds of rallies and marches across the country. The events were an ideal opportunity for Democrats to galvanize their supporters: former President Barack Obama promoted them on social media and dozens of party officeholders and candidates joined the protests. But neither President Joe Biden nor Vice President Kamala Harris attended any of them. Harris has spoken to a couple of other gatherings over the last two weeks, but Biden himself has not made a speech on the issue or met with abortion providers since the draft was first leaked.

To summarize: Senate Democrats would rather have the issue for campaigning than maintain some level of protection for legal abortions. House Democrats are adopting language designed to drive away voters in the political center who do not hold unequivocal feelings on such a complicated personal matter. And the Democratic President is barely talking about the topic in public at all.

On a political landscape that is looking increasingly unfavorable to Democrats, the potential elimination of federal protection for abortion rights is a rare issue that could work in their favor this November. But the party’s early floundering on the topic is less than reassuring. Maybe Newsom is on to something.