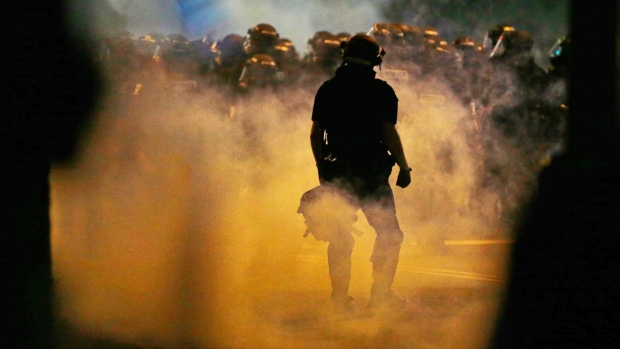 The last several days saw two black men killed by police officers, one shot in Tulsa by a white police officer, another in Charlotte shot by a black police officer. Both communities expressed pain and outraged, one community erupted in violence. The Charlotte shooting in particular was riddled with conflicting information and different narratives. In Tulsa, the officer was just charged with first-degree manslaughter. We help you get a handle on all of this by showing some different narratives and just the facts as best as they are known at this point.
Also, our contributions to the Christian Science Monitor continue this week with The Politics of US: Trade. Use the AllSides topics page on trade for background, news, policies and dialogs, and check out our new school lesson plan for trade, our latest addition to AllSides for Schools.
See other news featured by AllSides such as Trump Catching Up, What We Know about Bombing Suspect and the latest AllSides News.
Snippets from the Left
Blame, rumor and blood in Charlotte as protests surge and authorities bolster forces
Washington Post
"“They killed him,” some protesters yelled as police scattered the crowd of several hundred. As demonstrators moved on to other parts of the city, some smashed the windows of businesses and set small fires in the street....Officials said the apparent shooting was “civilian on civilian.” But a police spokeswoman declined to comment on how they reached that conclusion, other than to say, “This is not an officer-involved shooting.”
Witness accounts of the incident differed widely from those offered by the city."
Snippets from the Right
Violence rocks Charlotte as police insist protesters have wrong story on shooting
Washington Times
“After a night of violent protests and looting, police in Charlotte tried to assuage outrage overTuesday’s fatal shooting of a black man by an officer, calling for calm Wednesday and saying that the version of events leading up to the shooting being cited by members of the public was based on incorrect information....“It’s time to change the narrative, because I can tell you from the facts that the story’s a little bit different as to how it’s been portrayed so far, especially through social media,” Charlotte-Mecklenburg Police Chief Kerr Putney said Wednesday during a news conference."
Snippets from the Center
Why Charlotte exploded and Tulsa prayed
CNN
“Terence Crutcher was unarmed when a Tulsa police officer shot him. His death was captured on video and released to the public. On Wednesday evening, hundreds attended a vigil in his honor, holding hands and bowing their heads.
Meanwhile, that same night, a dramatic scene played out in Charlotte after an officer shot and killed Keith Lamont Scott while attempting to serve a warrant meant for someone else. The video of this incident has not yet been made public. Protests began peacefully on Wednesday, but later devolved into a violent scene."
Shooting of Keith Lamont Scott
Wikipedia
"Keith Lamont Scott, a 43-year-old African American man, was fatally shot by a police officer on the afternoon of September 20, 2016, in Charlotte, North Carolina, in the United States. Police officers arrived at an apartment complex to search for an unrelated man with an outstanding warrant. According to police, officers saw Scott exit a vehicle in the lot while carrying a handgun. Officers state that Scott refused to drop the gun. Officer Brentley Vinson, also an African American, fatally shot Scott."
Shooting of Terence Crutcher
Wikipedia
"On September 16, 2016, Terence Crutcher, a 40-year-old African-American man, was fatally shot by a white police officer Betty Shelby in Tulsa, Oklahoma. He was unarmed during the encounter."
Discover more on this topic on AllSides.
Story Of The Week, News, Shooting