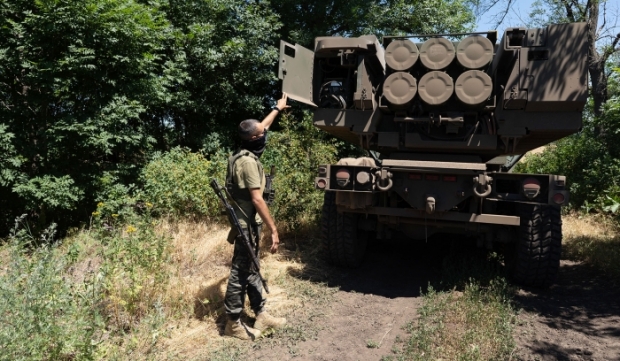 Anastasia Vlasova for The Washington Post via Getty Images

After more than six months of intense fighting and Russian victories in its invasion of Ukraine, the Ukrainian military is striking back with a large-scale counteroffensive.

Ukrainian President Volodymyr Zelenskyy said Monday that Ukrainian forces had retaken some 2,300 square miles of Ukraine controlled by Russia in recent weeks. Zelenskyy visited the northeastern city of Izyum Wednesday and raised the Ukrainian flag over the city with other officials. Russia was recently forced to pull back from the city, which served a key base for Russia's effort to conquer the Donbas region in eastern Ukraine.

Secretary of State Antony Blinken made an unannounced trip to Ukraine last week and committed $2 billion more in aid for the country and other European nations. To date, the U.S. has committed over $13 billion in security and military aid for Ukraine since Russia's invasion began in February. Reports across the spectrum cite experts who credit Western aid for the success of the counteroffensive.

Ukraine's gains raise questions about Russia's military stability and President Vladimir Putin's plan for the war. Several Russian officials called for Putin to resign amid recent losses. Reports emerged this week that Putin scrapped a peace deal at the start of the invasion negotiated by his top envoy. Last week, U.S. intel revealed that Russia is looking to bolster its war arsenal with the help of rockets from North Korea. And on Thursday, Putin met with Chinese President Xi Jinping held their first meeting since the invasion began.

News sources across the political spectrum framed the Ukrainian counteroffensive similarly: as having caught Russia off-guard to take back significant territory. Voices on all sides lauded on Ukrainian resilience and highlighted experts who praised the success of foreign military aid in stymying Russian advances. However, many agreed that it's too early to say whether recent successes truly improve Ukraine's chances of eventual victory. National Review’s Rich Lowry said the counteroffensive proved “there’s no substitute for hard power.” The New York Times's Paul Krugman said Ukraine had deflated “MAGA macho myths.”

"The result is an opportunity for Ukrainian forces, which despite significant losses of their own, are hoping to make more territorial gains before winter conditions harden battle lines. Further gains by Ukraine — particularly around the southern city of Kherson — would deal additional blows to Russian morale and increase pressure on Putin, who is already facing calls by hard-line Russians to announce a general mobilization that could be politically toxic for his regime."

"The broader point is that modern wars aren’t won by looking tough. Courage — which the Ukrainians have shown in almost inconceivable abundance — is essential, but it doesn’t have much to do with bulging biceps. And bravery must go hand in hand with being smart and flexible, qualities the Russian Army evidently lacks."

"In early August, the Pentagon estimated that as many as 80,000 Russian troops have been injured or killed in Ukraine since the beginning of the war. This is the highest number provided by American experts so far, as in late July CIA Director William Burns had put the U.S. intelligence estimate 'in the vicinity of 15,000 killed and maybe three times that wounded.'"

For Ukrainians rooting out Russians in south, patience pays

"In Kherson, the growing Ukrainian military pressure is clear, say pro-Ukraine city residents contacted by phone. It is seen, they say, in the darkening mood of Russian troops and their enablers, as well as in the anxious movement of ammunition and troops, who have seeded themselves among civilians. The pressure also yields a first glimmer of hope that liberation may not be far away."

"A lightning counter-offensive by Ukraine has retaken more than 700 square miles in the past few days, leaving Russian soldiers literally running for their lives — and Vladimir Putin bizarrely attended the opening of a new Ferris wheel during the height of his troops’ retreat...Meanwhile, Russian soldiers were abandoning their tanks, weapons and even clothes in the face of the Ukrainian onslaught, Ukraine’s soldiers claimed to the Telegraph."

"The United States is a marvel of soft power, binding allies to us, attracting people all over the world who want to come here, and reaching the most far-flung places in the world. What we’ve been able to provide Ukraine that has been most telling, though, hasn’t been diplomatic or moral support, but rather a system that can put a rocket directly on a target up to 50 miles away."