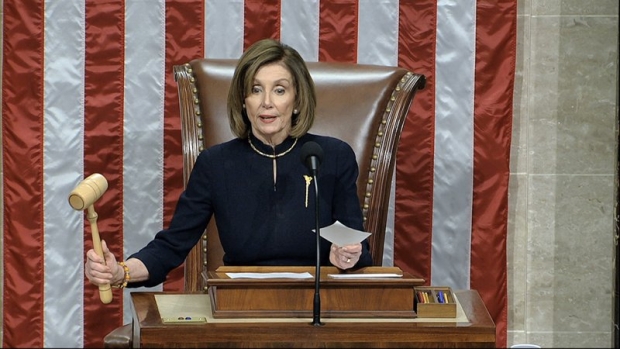 The House of Representatives voted in favor of two articles to impeach President Donald Trump Wednesday night. Trump joins Andrew Johnson and Bill Clinton as the only other U.S. presidents to be impeached, and will now face a Senate trial to determine if he'll remain in office.

Media Bias Alert: Bias has been on full display in the media's coverage of impeachment. Outlets often promote vastly different top stories, reflecting a bias about what issues should be considered most important. Here's an example.

President Donald Trump impeached by US House, 3rd in history

"The articles of impeachment, the political equivalent of an indictment, now go to the Senate for trial. If Trump is acquitted by the Republican-led chamber, as expected, he still would have to run for reelection carrying the enduring stain of impeachment on his purposely disruptive presidency."

"The mood in the House chamber shifted throughout the day as the lawmakers pushed toward the vote. Democrats spun lofty speeches, framing impeachment as what many said was their duty to protect the Constitution and uphold the nation’s system of checks and balances. Republicans mocked and jeered the proceedings, as they stood by their party’s leader, who has frequently tested the bounds of civic norms."

"Speaking at a wide-ranging end-of-year news conference, Mr. Putin described Wednesday’s events in Congress as “the continuation of political infighting” between Democrats and Republicans. “I don’t think Trump will be voted out of power on made up charges,” Mr. Putin said. “Democrats lost the last election, and now they want to win by other means.” Nearly all Democrats in the House of Representatives supported abuse-of-power and obstruction of Congress charges against Mr. Trump for pressing Ukraine to investigate former Vice President Joe Biden, a leading Democratic candidate for 2020’s presidential election."

Tulsi Gabbard on Trump impeachment: 'I could not in good conscience vote either yes or no'

"“I am standing in the center and have decided to vote Present. I could not in good conscience vote against impeachment because I believe President Trump is guilty of wrongdoing. I also could not in good conscience vote for impeachment because removal of a sitting President must not be the culmination of a partisan process, fueled by tribal animosities that have so gravely divided our country,” Gabbard said."

"Earlier Wednesday, she introduced a resolution to instead censure Trump, which expresses strong disapproval of conduct, whereas impeachment could result in removal from office. Gabbard said she worked for the best interests of the country whether in the military or in Congress."

Trump is impeached by the House of Representatives, leaving an indelible mark on his presidency

"After 11 hours of fierce argument on the House floor between Democrats and Republicans over Trump’s conduct with Ukraine, lawmakers voted almost entirely along party lines to impeach him. Trump becomes the third president in U.S. history to face trial in the Senate — a proceeding that will determine whether he is removed from office less than one year before he stands for reelection."

"The Senate is widely expected to acquit Trump, since conviction and removal would require 67 votes in a chamber where Democrats and their allies hold 47 seats. If Trump is acquitted, it would launch an unpredictable stretch of his presidency; his reaction would be uncertain after opponents had taken a powerful but ultimately unsuccessful shot at removing him."

"Senior Democratic aides said the House was “very unlikely” to take the steps necessary to send the articles to the Senate until at least early January, a delay of at least two weeks and perhaps longer."

"Though the House adopted two articles of impeachment charging Trump with abuse of power and obstruction of congressional investigations, it must pass a second resolution formally naming impeachment managers to present the case in the Senate. That second vehicle triggers the official transmission of articles to the Senate. By delaying passage of that resolution, Pelosi and top Democrats retain control of the articles and hope to put pressure on Senate Majority Leader Mitch McConnell to adopt trial procedures they consider bipartisan."

Trump's response to impeachment: attacking the late husband of a pro-impeachment Democrat

"At the exact moment that the House approved the first article of impeachment, Trump was 600 miles away at a rally in Battle Creek, Michigan, telling a relatively innocuous, absurd tale he’s repeatedly told about how the military’s stealth planes are literally invisible."

"But the lowest moment of the night came when Trump attacked Debbie Dingell, a Democratic congresswoman from the state he was speaking in, for voting in favor of impeachment. He even went as far as to suggest her husband, the late World War 2 veteran and former congressman John Dingell, whose seat she now holds, is in hell."

"Among Democrats, Jeff Van Drew of New Jersey — who is expected to become a Republican — and Collin Peterson of Minnesota voted against both articles after opposing the opening of the impeachment inquiry in October. Representative Jared Golden (D., Maine) followed through with his Tuesday announcement by splitting his vote — approving the abuse of power charge but voting “nay” on obstruction of Congress."

"In a striking image, Trump attacked the impeachment process as a “political suicide march” to the cheers of thousands of supporters at a rally in Michigan just as the House members cast their votes. “It doesn’t really feel like we are being impeached,” Trump said. “We did nothing wrong. We have tremendous support in the Republican Party, like we’ve never had before.”"

"Addressing supporters at a campaign rally in Battle Creek, Michigan, while the House was impeaching him back in Washington, Mr. Trump served notice that his status as an impeached president running for reelection will haunt his Democratic opponents at the ballot box.“This lawless, partisan impeachment is a political suicide march for the Democratic Party,” Mr. Trump declared, noting his rise in approval ratings. “Have you seen my polls in the last four weeks?”"

"The campaign rally, long scheduled, capped a dramatic day of split-screen television coverage with a buoyant Mr. Trump reveling with his supporters in a 2020 battleground state as the House Democrats pushed through two articles of impeachment on party-line votes. The vote sets up a trial next month in the Republican-led Senate, where Mr. Trump’s acquittal is virtually assured."

"The Trump campaign raised $5 million on the day House Democrats voted to impeach the president on two counts, according to campaign manager Brad Parscale. The Republican National Committee (RNC) also released record fundraising numbers Wednesday, raking in $20.6 million during the month of November alone, according to Federal Election Commission data obtained by Fox News. The party has the most cash-on-hand that it's had since 2012, the RNC told Fox News."

Recommended Reading
I left a job in Congress 8 years ago to pursue healing and unity. Here’s what I learned, and what was missing from the debate about the speaker of the House.