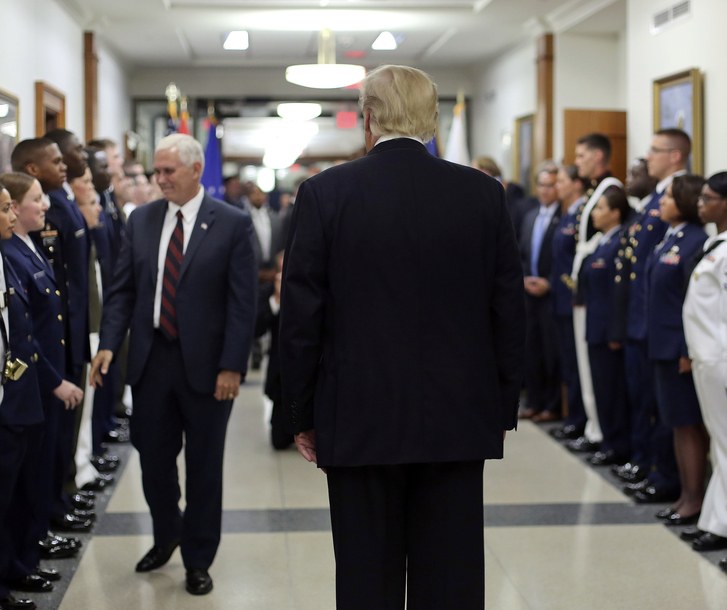 In a series of tweets, President Trump announced that transgender people will be banned from joining the nation's military. Transgender members of the military have spoken out calling it a "shot in the face". Senator John McCain (R-AZ), Chairman of the Senate Armed Services Committee, released his own statement on the ban saying the Department of Defense is conducting a study on the "medical obligations it would incur, the impact on military readiness, and related questions" but that such policy directives shouldn't be made on Twitter. (The nonpartisan nonprofit RAND Corporation previously released their own findings.) The Joint Chief's revealed today that they were not consulted on the move and no changes will be made anytime soon.
See more featured stories from AllSides such as Scaramucci Calls Out "Senior Leakers", McCain Casts Critical Health Care Vote, Sessions Under Fire and the latest AllSides News.
Snippets from the Center
Trump: Transgender people 'can't serve' US military
BBC News
"US President Donald Trump says transgender people cannot serve in 'any capacity' in the military.
He tweeted that he had consulted with military experts and cited 'tremendous medical costs and disruption'.
The Obama administration decided last year to allow transgender people to serve openly in the military.
But in June, Defence Secretary James Mattis agreed to a six-month delay in the recruitment of transgender people."
Snippets from the Left
OPINION: The Cruelty and Cynicism of Trump’s Transgender Ban
David Remnick, The New Yorker
"Let’s begin with the retrograde cruelty. There are thousands of transgender people already serving among the 1.3 million active-duty members of the military. These are people who have volunteered their service and have potentially put their lives on the line, and yet their President, who managed to come up with a flimsy doctor’s note back in the day, denies them their dignity, their equality. He will not “accept or allow” them in the military. Imagine the scale of this insult.
...
It is implausible that Trump paid much attention to his highest-ranking generals, or to experts, generally; Secretary of Defense James Mattis has supported transgender individuals joining the military...Trump’s decision to bar transgender people from the military is pure politics, cheap and cruel politics, a naked attempt to divert attention from his woes, to hold on to support from his base—a base that he believes will cheer his latest attempt to do battle with the secular-humanist coastal élites who are so obsessed with identity politics."
Snippets from the Right
Transgender military ban: Individual rights must be sacrificed, says Gen. Keane
Fox News
"'The military did not come forward and ask for the transgender ban to be lifted. That was imposed on the military by Secretary of Defense [Ash] Carter last June, literally six months before the end of the Obama administration,' Keane told FOX Business’ Stuart Varney.
...
According to Keane, after Carter lifted the military ban on transgender people in June of 2016, several thousand soldiers opted to change their gender, receiving medical treatment as of October 1st of 2016.
...
The retired four star general said the U.S. military is not a social welfare organization and individual rights must be sacrificed for the purpose of readiness. 'We exist for one reason only and that is to protect the American people and our national interest, and thankfully, we have people who volunteer as American patriots to that very thing and put their life on the line,' Keane said."
Discover more on this topic on AllSides.
Tags:
News
Story of the Week
Transgender
transgender ban