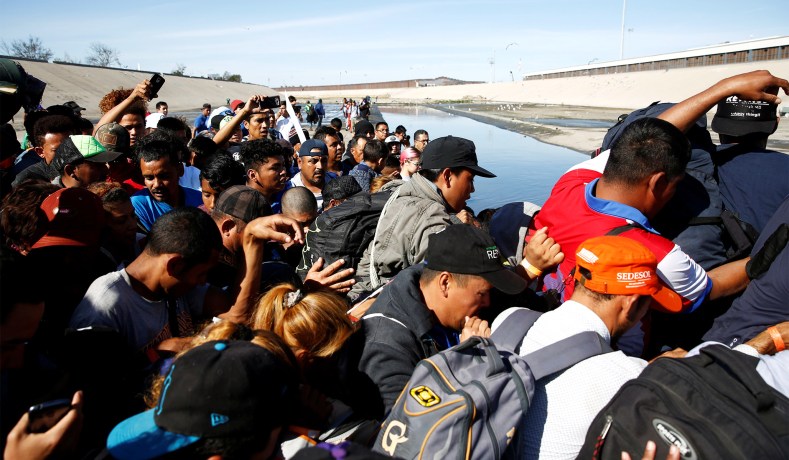 Tensions are rising at the U.S.-Mexico border with the arrival of thousands of Central American migrants claiming asylum, particularly as U.S. Border Patrol used tear gas to disperse a group who attempted to rush the fence in Tijuana, Mexico.
Some have commended Trump for his dedication to maintaining an immigration system defined by law and order in the face of increasing opposition. Others have called the president's tactics cruel, as most migrants say they are fleeing violence in their home countries.
We believe there's no such thing as unbiased news, but what about unbiased readers?Republicans are more likely to trust The New York Times and Democrats are more apt to trust Fox News when they do not know which source they are reading, according to a recent study by the Knight Foundation and Gallup. Learn more.
Check out some other big stories this week: Michael Cohen Pleads Guilty to Lying to Congress About Moscow Trump Tower Project, Trump Proposes Government Start Television Network to Compete With CNN, and Trump Rejects U.S Climate Change Report.
Snippets from the Right
The Media Was Wrong About the Caravan
National Review
"It was conventional wisdom in the press that the caravan was a concoction of Trump’s fevered imagination. It soon would dissipate and even if not, take months to reach the United States. This widely repeated factoid was based on calculations of its movement on foot (it apparently didn’t occur to anyone that the caravan also would travel by bus or truck).
...
The latest once again puts the Left’s radicalism on display. It’s not just that Immigration and Customs Enforcement should be abolished; border agents can’t defend themselves from an aggressive rabble.
...
Trump has been wrong to portray the migrants as inherently threatening — the overwhelming majority just want a better life — but we have the sovereign right to decide who does and doesn’t come to this country, and demand that it be an orderly, lawful process.
If any significant portion of the caravan gains entry, it will send a message that large-scale movements of people are better than small groups. This could lead to even more pressure at the border, no matter how much it will be dismissed by the same people who insisted the caravan would never arrive at the border."
Snippets from the Left
The Migrant Caravan Isn’t Causing the Border Crisis. Trump Is
TIME Magazine
"The U.S. president has created a bottleneck in Tijuana. Government agents are barely processing a hundred asylum applications per day, as a government official confided to me. They could work far faster if judges and caseworkers were sent, instead of soldiers, to one of the most active borders in the world.
Trump finally has his wall.
...
Trump has built this structure in a way that encourages people seeking to follow the law to instead break it. The members of the Central American caravans, who I have met with, wanted to avoid the brutal Mexican drug cartels on the Gulf coast. That’s why they chose to go to Tijuana instead of taking the closer route to Texas.
...
The image of the United States in the world right now is that of a nation that throws tear gas at women and children. Of a nation that can easily absorb thousands of refugees — the same way many European nations have been doing for years — without significant economic consequences, but doesn’t. Of a nation with a failed immigration system, that refuses to cooperate with all the countries in North and Central America. I wish Trump saw the same potential in America that those he’s keeping out do."
Snippets from the Center
Tear gas: 'Harsh, terrifying' and legal to use on civilians (and immigrants)
USA TODAY
"The appropriateness of government officers using tear gas to turn back a group of immigrants who rushed the border south of San Diego on Sunday has come under intense scrutiny, much like it did when those methods were applied on protesters during the Ferguson riots of 2014.
Although there’s plenty of debate about the suitability – or even effectiveness – of relying on that kind of chemical agent, its legality is not in question.
...
The strategy was largely successful in keeping the immigrants at bay but drew strong rebukes from many Democratic leaders – including California Gov.-elect Gavin Newsom – who expressed horror at the sight of kids crying in agony and running away in terror.
...
Department of Homeland Security officials defended the use of tear gas – which causes nose and throat irritation, as well as coughing and a choking sensation – as the least harmful way for CBP agents to defend themselves as they were pelted with rocks and bottles from the other side of the fence."
Discover more on this topic on AllSides.
Tags:
Immigration
Migrant Caravan
Donald Trump
Illegal Immigration
Story of the Week
News