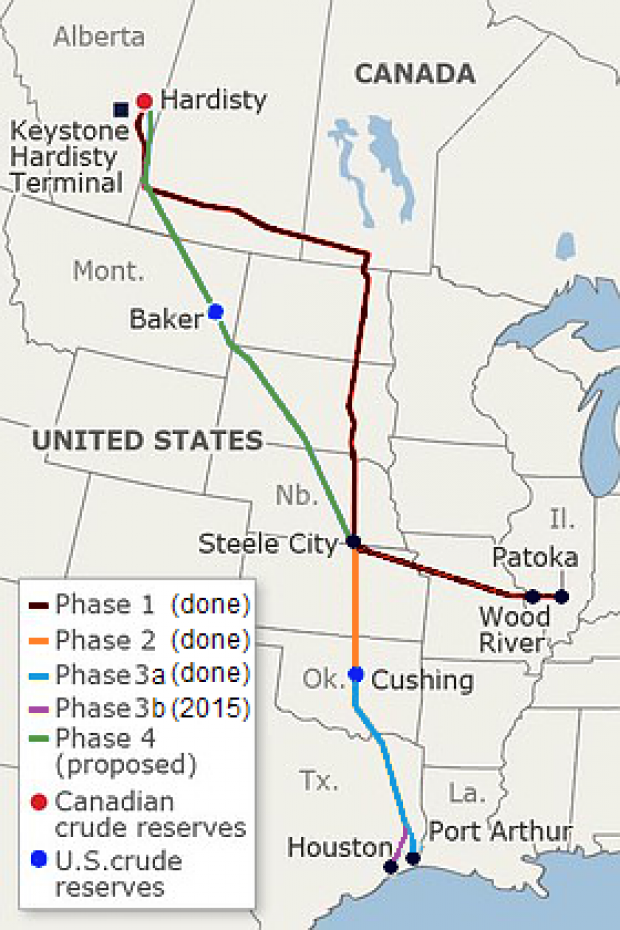 The Senate just passed a bill that approves construction of the Keystone XL oil pipeline. As you've no doubt heard, this project has plenty of fans and opponents. President Obama is currently on the "not a fan" side and has promised to veto the bill. Before its passage today, the Senate had been debating the bill, and many proposed amendments to it, all month.
Media Snippets from the Right
Keystone filibuster fails, pipeline poised for approval
Washington Times
"The project is popular with voters and even has won support from some labor unions, who say it will produce jobs. But environmental groups have declared the project a key test of the U.S. commitment to combatting climate change, and have pressured Mr. Obama to fight the pipeline.The 1,1790-mile pipeline would carry oil from Alberta, Canada, to Steele City in Nebraska, where other pipelines would farm it out for refinement.Mr. Obama says he would veto the bill because he doesn’t want to change current law, which gives his administration the power to make a decision."
Media Snippets from the Left
Senate approves Keystone XL pipeline bill despite veto threat
Los Angeles Times
"Potential job growth made Keystone a draw not only for Republicans, but also trade unions and some Democrats along the Midwestern route to Nebraska.Ultimately, though, permanent jobs operating the pipeline will number just 35, according to a State Department analysis -- drawing critics who say the project is not worth the environmental risks from possible spills.Opponents argue another new pipeline will only worsen dependence on oil and contribute to climate change, though studies show Keystone alone would not likely have a major effect on greenhouse emissions."
Media Snippets from the Center
Senate passes Keystone XL measure
CNN
"The Senate passed a bipartisan bill on Thursday to clear construction of the Keystone XL pipeline, a controversial project that would transport oil from Canada to the Gulf of Mexico.The vote was 62 to 39. Nine mostly centrist Democrats joined with Republicans to support the bill despite President Barack Obama's promise to veto it. The President has said the decision should remain within the executive branch.Passage was a victory for newly empowered Republicans who made the bill their top legislative priority and the first taken up on the Senate floor."
Discover more on this topic on AllSides.
- John and the AllSides team
News