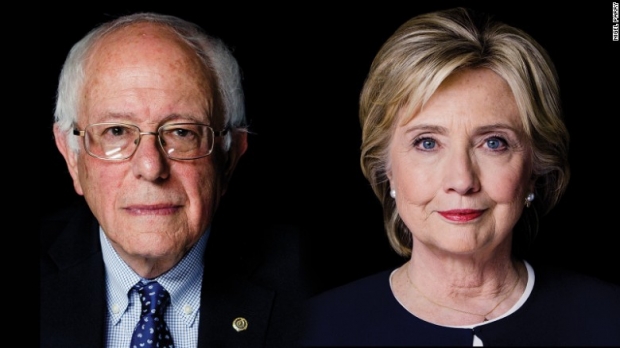 Tonight New York hosts a Democratic debate, with the primary around the corner. Tension has been rising between the Hillary and Bernie campaigns as Bernie has been on a winning streak in recent primaries even while Hillary still holds the lead. News sources from the Left and the Center have been covering the lead up to the Democratic debate and primary, while sources on the Right have been focused mainly on the GOP race. We thought it would be interesting to show you a representative variety of the coverage we found on Sanders vs. Clinton this week.
Also, if you haven't already, we invite you to add your opinion to our question-of-the-week:Should we deport illegal immigrants? Where do you stand? Vote and join the civil dialog here.
See other news featured by AllSides such as No Prosecution for Trump Campaign Aide, Trump Versus the RNC, Cruz Declares War on Matt Drudge and the latest AllSides News.
Snippets from the Right
See what the TV cameras are not showing you from the Clinton and Sanders campaigns in New York City
TheBlaze
“A crowd filled the New York Sheraton ballroom to capacity, waiting for the former Secretary of State to speak.
Clinton delivered what you might expect of a seasoned politician and veteran of campaigns like this. No real surprises, mostly red meat to the Sharpton faithful.About 20 minutes into Clinton’s speech, Pavlina Osta, a HuffPo contributor and radio host who was sitting in front of me, pulled a puppy from her purse, turned her back on Clinton and started taking selfies with the pooch.…After Hillary’s speech, it was off to Washington Square Park and the Bernie Sanders Rally…After union leaders, local politicians, activists and celebs finished presenting their reasons for supporting Sanders over Clinton, Trump and Cruz, the music was turned up a notch as Bernie and Jane Sanders took the stage to what my colleague Josiah Ryan called a ‘Rockstar’s”’ welcome.The crowd was estimated to be 27,000 — and it felt like it.”
Snippets from the Left
OPINION: Hillary’s Inability to Grapple With Inequality Is Making Her Vulnerable to Bernie in New York
Huffington Post
“As runaway inequality took off in the 1980s, Hillary’s political ambitions took off as well — first for Bill in Arkansas, then for Bill as President, and then, at long last, for herself. Her peer group always included these Ivy League elites. Many of her former classmates moved up into elite law firms and into the highest financial circles. Her peers were making millions, tens of millions and some even billions of dollars.
These wealthy elites became the financial glue of Bill’s campaigns and her campaigns. That’s why we’ll never, ever see the transcripts of her $225,000 Wall Street speeches. Those talks would show the side that Hillary has trained herself to hide so carefully from the public. These elites are her friends, her supporters, her funders. Turning on them would be like turning on herself and all she has become and wants to become.”
Snippets from the Center
Here are three things (almost) sure to come up at Clinton-Sanders debate
Christian Science Monitor
“Last week Sanders said Clinton was not ‘qualified’ to sit in the Oval Office because her associated super PAC takes corporate contributions, she voted for the war in Iraq, and she supports free-trade agreements.
He’s since walked that back. He says it’s really her judgment that is at issue with these positions.
Edge: Clinton. Yes, really. It’s ‘qualified’ that’s the problem for Sanders. He disagrees vehemently on some policy issues with Clinton, but in terms of variety of presidential-prep job experience, the former congressional Watergate panel staffer, first lady, and national legislator has got more lines on her résumé than he does. She’ll likely bring up this jibe as a means to remind voters of all the jobs she’s had.”
Discover more on this topic on AllSides.
Tags:
News
Bernie Sanders
Hillary Clinton