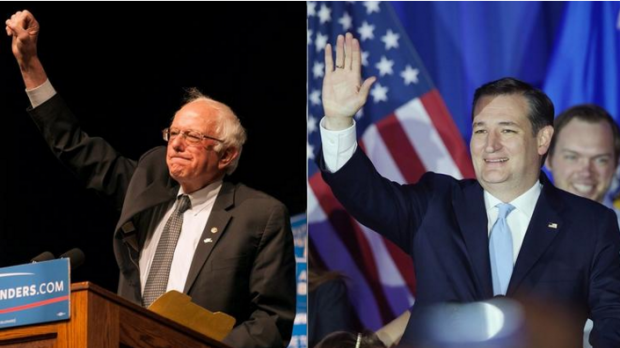 This week was the first time since 1984 that a presidential nomination front-runner lost the Wisconsin primary. This time around, the front-runners in both parties lost. It was a good night for Ted Cruz and Bernie Sanders. Is this part of a larger shift in a new direction? What does it mean for the Democratic and Republican races? It depends who you ask, so we’re sharing three perspectives on this today.
Also, we invite you to add your opinion to our new question-of-the-week:
Should we deport illegal immigrants?
Where do you stand? Vote and join the civil dialog here.
See other news featured by AllSides such as Sanders Says Clinton Not Qualified, March 2016 Jobs Report, Clinton, Greenpeace Spat and the latest AllSides News.
Snippets from the Left Leaning
Bernie Sanders and Ted Cruz claim Wisconsin victories, ignore daunting delegate math
LA Times
“Trump regularly wins independent voters in open primaries like Wisconsin’s; on Tuesday independent voters were split, and Cruz buried him among Republicans.
One of Trump’s signature issues was waved off by voters: the percentage saying immigration was an important issue was in the single digits……Front-runners can weather difficult patches. In 2008, Clinton was in the position Sanders is in now, winning late contests but unable to cut far enough into Barack Obama’s delegate lead to claim the nomination. In 2012, the Republican front runner, Mitt Romney, was humbled by late-season defeats by his challengers.
Almost always, those front-runners end up as the nominees. But this year has been anything but usual. In both parties, the outcome now depends on whether Tuesday’s results turn out to have been harbingers of things to come or stumbles en route to the nomination.”
Snippets from the Right
Ted Cruz delivers stunning blow to Donald Trump with Wisconsin win
Washington Times
“The Cruz victory also makes it tougher for Mr. Trump to win the nomination outright on a first ballot at the July convention.
Ohio Gov. John Kasich, the third man in the race, insisted he’s staying in despite another loss.
‘The nomination contest is now wide open,’ Kasich campaign strategist John Weaver said in a memo issued just before polls closed. ‘This week will be remembered as the one in which Ted Cruz and Donald Trump both effectively admitted they will not reach the GOP Convention with enough bound delegates to be the nominee.’
Mr. Kasich argues, and polling confirms, that he runs the best of the three GOP candidates against Democratic front-runner Hillary Clinton. But GOP primary voters have paid little attention to that as they pick their champion.”
Snippets from the Center
Fasten Your Seat Belt — It's Going To Be A Bumpy Ride To The Conventions
NPR
“Despite collecting the lion's share of the delegates in Wisconsin and raising his national tally to 517, Cruz has no chance whatever of reaching 1,237 before the convention. But he hopes to slow Trump down enough to sow doubts about the New Yorker's electability and keep the convention open for multiple ballots. In that event, as the runner-up in delegate strength, he hopes to consolidate a coalition that could win him the nomination.
…Sanders, the longtime liberal senator from Vermont, was arguably the vote-getting star of the night. He carried all but three of the state's 72 counties and ran up more than 56 percent of the statewide vote. That was expected to give him about 50 of the state's 86 pledged delegates. It also signaled that his recent wins in a slew of caucus states were not a fluke of the process but evidence of a movement finding its moment.”
Discover more on this topic on AllSides.
News, Bernie Sanders, Ted Cruz, Election: Presidential