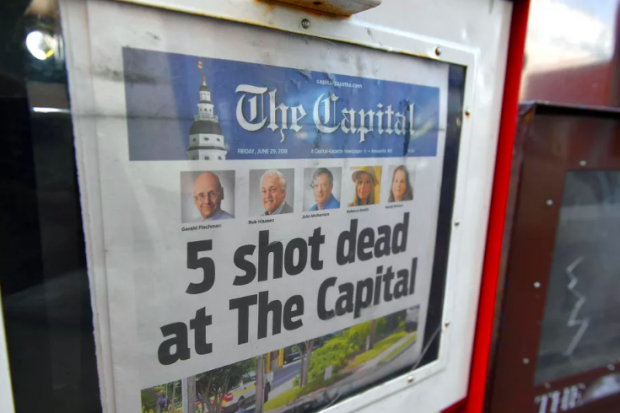 A gunman killed five people last Thursday at the offices of the Capital Gazette, a newspaper in Annapolis, Maryland, reigniting the debate around gun control and mental health. Some argue that tighter restrictions on firearms are necessary to prevent further shootings, particularly since the suspect had been previously convicted of harassment. Others emphasize that the shooter obtained the weapon legally in a state with tight gun laws and that he had a history of mental health problems.
Check out some other big stories this week: Trump Narrows Candidates for Kennedy Replacement, Judge Rules Students Do Not Have Fundamental Right to Literacy, and Several Democrats Call to Abolish ICE, President Trump Responds.
And take a look at our recent fact check article: What Does the SCOTUS Travel Ban Ruling Actually Mean?
Snippets from the Left
A Capital Gazette shooting survivor doesn’t want your thoughts and prayers
Vox
"Selene San Felice, a survivor of the Capital Gazette shooting, will take your prayers, but she’d rather have you vote. In a powerful Sunday op-ed she wrote in the Capital Gazette, the reporter implored Americans to 'do something' about the United States gun-violence epidemic — by starting with the midterm elections.
'If your help ends at thoughts and prayers, I don’t want them. What I want is action,' San Felice wrote. 'We must do better. We must vote better. We must push for legislation so that this doesn’t feel normal.'
That means addressing the loopholes that allowed the shooter to legally purchase a pump-action shotgun that allegedly killed five people and injured two more, despite his history of a harassment conviction. Harassment isn’t one of the misdemeanors that bar a person from gun ownership.
...
'I’ve heard that President Trump sent his prayers. I’m not trying to make this political, right? But we need more than prayers,' San Felice told CNN. 'I appreciate the prayers. I was praying the entire time I was [hiding] under that desk. I want your prayers but I want something else.'"
Snippets from the Center
Capital Gazette shooting suspect seen as angry loner, obsessed with those who 'wronged' him
USA TODAY
"He left a years-long trail of harassment, threats and contemptuous behavior. There were dozens of warning signs that he might turn violent – including repeated threats of killing a journalist.
Although none of that was seemingly taken very seriously by authorities, Jarrod Ramos’ words and online activity offer examples that in hindsight could have prompted a stronger response from his employers, police and the court system. Ramos is now charged with killing five people at a Maryland newspaper last week.
...
Experts say the attack at the Capital Gazette highlights the challenges of trying to balance the rights of people to speak freely against concerns that they could turn violent. In a court filing, Ramos said he had seen five mental health professionals for at least 75 visits before last week's shooting.
...
[Attorney Brennan] McCarthy chillingly warned in a court filing: 'There exists a very real possibility that at some point in time, Mr. Ramos will take these violent fetishes as expressed in print, and will try to carry them out in person.'"
Snippets from the Right
Focus on central issue in Capital Gazette shooting
Boston Herald Editorial
"We should try to refrain from hateful castigations and volatile rhetoric. It only serves to dehumanize and we do not need more of that. Whatever the reason for this senseless massacre, we know that no sane person would slaughter innocents.
There may be issues with the accessibility of the weaponry involved and various toxic cultural influences, but at the end of the day this is a mental health issue.
Legislation like the 'red flag' gun bill, on the brink of becoming law in Massachusetts, may be a positive step. It is flawed, but the bill focuses on the mental health aspect of gun ownership.
Let’s keep working on this issue regardless of the various political sensitivities at play."
Discover more on this topic on AllSides.
Tags:
Gun Control and Gun Rights
Capital Gazette
Mental Health
Story of the Week
News