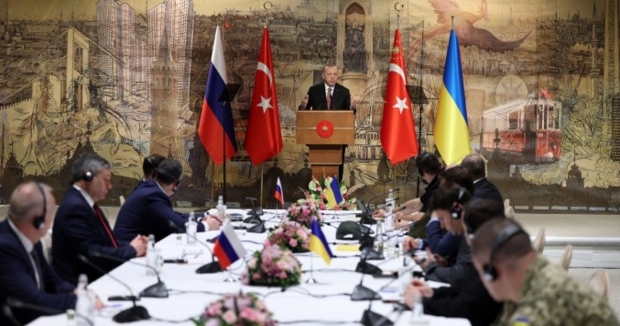 Missile strikes continued this week around the Ukrainian capital of Kyiv, despite claims from Russia that its objectives there were complete after Russian and Ukrainian officials held peace talks in Turkey.

Though Russia said it was scaling back operations near Kyiv and focusing on separatist-backed regions in eastern Ukraine, attacks on the capital reportedly persist. U.S. defense officials have framed Russia's troop movements as a repositioning rather than a withdrawal, and warn that Russian forces could be gearing up for more intense assaults.

Reporting across the political media spectrum tends to frame Russia and President Vladimir Putin as dangerous and worthy of condemnation, while generally painting Ukraine's efforts to fight off the invasion as worthy of praise.

Many right-rated outlets and voices frame Biden as incapable of handling the situation; some argued that Biden's recent "cannot remain in power" remark about Putin and the White House's subsequent move to clarify was a sign of him being unfit to navigate the conflict. Bias in coverage of the conflict from left-rated sources has been less evident. Meanwhile, some left-rated sources failed to be transparent when publishing op-eds about the conflict by people with financial ties to defense contractors and the weapons industry.

In an example of how sensationalized celebrity stories often get the most attention, some media outlets focused more on the incident between Will Smith and Chris Rock at the 2022 Oscars this week than on Russia-Ukraine.

"The retreat comes a day after Russian officials said military operations in the Ukrainian cities of Kyiv and Chernihiv would scale back and over a month after Vladimir Putin's army seized the site of the catastrophic 1986 nuclear disaster."

"Western skepticism to Russia's supposed de-escalation of the conflict emerged as Russian and Ukrainian negotiators met in Istanbul yesterday for their first face-to-face talks in two weeks, in a further attempt to see if they can find sufficient common ground to end the fighting."

Russian Pullback From Kyiv Is Likely to Be Limited and Tactical

"Not only has Ukraine’s military been inflicting losses and taking back some territory around Kyiv in any case, but Russian commanders had already said they planned to re-concentrate their forces in the east, where they have made greater progress with the city of Mariupol in the final stages of a brutal siege."

U.S. believes Russia's pullback near Kyiv is "repositioning," not "withdrawal"

"Top Russian military officials said last week that Moscow's operation was entering a "new phase" focused on "liberating" the Donbas region of eastern Ukraine, where Russian-backed separatists have been waging a low-level insurgency for eight years. Some military experts caution that Russia could use a temporary ceasefire as an opportunity to resupply its troops and reorient its strategy after failing to achieve many of its military objectives over the first month of war."

Putin misled by 'yes men' in military afraid to tell him the truth, White House and EU officials say

"Military analysts say Russia has reframed its war goals in Ukraine in a way that may make it easier for Putin to claim a face-saving victory despite a woeful campaign in which his army has suffered humiliating setbacks."