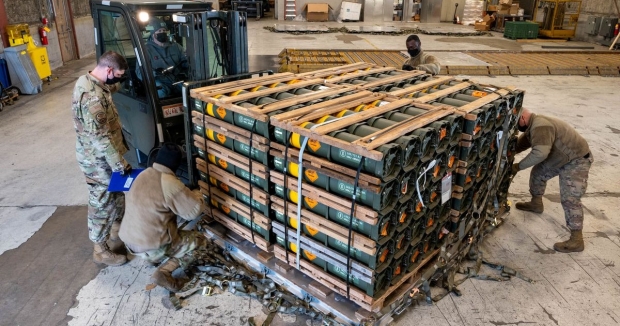 Russian President Vladimir Putin’s invasion of Ukraine has developed into a humanitarian crisis where innocent civilians have been killed and millions have been forced to flee their homes.

And if there’s one industry that has profited the most benefits from this conflict, it’s the defense contractors that are manufacturing the weapons being sent to Ukraine.

That has some people worried. They’re concerned that the defense industry is making money from Putin’s war and is also influencing the debate by promoting war. Other Americans notably don’t see profits as damning and believe that military spending is a necessity to defend freedom and protect us from dangerous aggressors.

Many prominent figures that have direct financial ties to the defense industry have been promoted in the news media long before Putin’s invasion began.

While they should be free to participate in the public dialogue like everyone else, some news outlets have failed to disclose their military interests in a transparent manner.

One opinion piece seen in the "National Security Daily" newsletter published by Politico (Lean Left bias) highlighted various voices that supported hitting Putin with hard sanctions. Here are some of the sentiments that were featured.

“If you just threaten sanctions and then they invade, by that point, lives have already been lost — Russian, Ukrainian and who knows who else.”

“Putin only responds to power and strength. Right now he sees the United States as weak.”

“We should embarrass [Putin]. He’s rattling our cage — we should be rattling his cage.”

While the pro-sanctions crowd highlighted wasn't unanimous in the article, the lack of transparency was still evident. When this piece was originally published, there was a label under the title that read “Presented by Lockheed Martin” — but the tag was removed from Politico's website about a week later.

This article was published on Jan. 24, one month before Putin’s invasion of Ukraine began. It was only one week after the invasion began that Forbes (Center bias) and other business news outlets were reporting that Lockheed Martin’s stock had boomed by 18%.

“It’s past time to give Putin a taste of his own medicine.”

Those are the words of Michael Vickers seen in The Washington Post (Lean Left bias) about a month before Putin invaded Ukraine.

Vickers, a former CIA operations officer, also has financial ties to the Ukraine war as a member of the Board of Directors of BAE Systems, which is widely known as Europe’s largest defense contractor. The Washington Post did not disclose this conflict of interest, amounting to media bias by omission. Some of Vickers’ other pro-war sentiments:

“U.S. airpower is superior to Russia’s, and it would substantially bolster the fighting spirit and capabilities of Ukraine’s armed forces.”

“Even the toughest sanctions, however, won’t be enough.”

“We can drive them out of Ukraine should they invade and occupy the country.”

This is not the first time that The Washington Post has promoted a pro-war column written by a person directly connected to the arms industry without disclosing their financial interests.

Back in April 2021, Meghan L. O'Sullivan and Richard Haass wrote an opinion piece for the Post that emphasized why President Biden should have maintained the “relatively modest number of troops we have in Afghanistan now, for the long haul.”

O'Sullivan sits on the board of Raytheon, a major U.S. defense contractor. The conflict of interest was not mentioned by the Washington Post until a tweet from investigative journalist Eli Clifton went viral, resulting in the news outlet modifying its listed biography for O’Sullivan.

While this correction was a step in the right direction, Clifton emphasized how this situation “points to the low bar for conflict of interest disclosure in the op-ed pages of a major newspaper and in the foreign policy debate.”

Another Raytheon board member, former national security adviser Stephen Hadley, published an op-ed in The Post that argues why the U.S. should keep its military presence in Iraq and how Trump’s decision to assassinate Qassim Soleimani could eventually “open the doors to diplomacy.”

Unlike the case with O’Sullivan, the Washington Post never went on to clarify Hadley’s connection to Raytheon — and they weren’t the only media source guilty of this omission.

As The Intercept (Left bias) reported, many pundits who were featured on national TV broadcasts during this time period had “undisclosed ties to the defense industry.”

Although the history of U.S. involvement in Putin’s invasion of Ukraine remains to be written, past conflicts such as the Iraq war loom over the media’s coverage of the Ukraine crisis.

“There’s no doubt that Iraq did unfathomable damage to America’s reputation and trustworthiness,” Max Bergmann, a senior fellow at the Center for American Progress who focuses on Russia security cooperation, told HuffPost (Left bias).

The Bush administration and senior officials in the Pentagon manufactured fabricated intelligence that was used to justify an unprovoked war of aggression against Iraq. Although they were caught red-handed four years later, most of the documented civilian deaths caused by the war were between 2003 and 2007 — and many believe that the press helped the government sell the war by using similar polarizing tactics that AllSides highlights today.

In an attempt to keep the general public’s attention at bay, the news media promotes and sells division. These outlets want their readers to build up impotent anger and lash out on ‘the other side’ of the political spectrum. Matt Taibbi (Center bias) discusses this in his book “Hate Inc.,” where he lays out the Ten Rules of Hate.

“The trick here is getting audiences to think they’re punching up, when they’re actually punching sideways, at other media consumers just like themselves, who just happen to be in a different silo,” Taibbi said. “Hate is a great blinding mechanism.”

The Ten Rules of Hate is based on the notion that there are only two ideas, which are in permanent conflict as if human beings can never come to an agreement. The media also promotes the ideas of hating people and not institutions, pointing fingers at others while also saying nothing is the collective good’s fault. If citizens are engrossed in attacking each other, then the government does not have to worry about them coming to a consensus that there is something fishy going on behind-the-scenes.

While it’s not unreasonable to air opinions that are in support of war, there wasn’t a balanced diet of perspectives for TV viewers to chomp on back in 2003.

Fairness & Accuracy in Reporting (Lean Left bias), a media watchdog group founded by Jeff Cohen in 1986, has a long history of challenging media bias. They released a study in 2003 that revealed only one of 267 American guests on three major TV networks within a two-week period expressed skepticism or opposition to a possible invasion of Iraq.

Even the one criticism, which came from Sen. Edward Kennedy (D.-Mass.), “was couched in vague terms” and raised questions rather than directly condemning the idea of an invasion.

Domestic arms dealers have long foreseen a brewing conflict in Ukraine with Russia. The U.S. has been providing Ukraine with millions of dollars in weapons and military training as far back as 2000, according to data collected by The Security Assistance Monitor.

Looking toward future conflicts, many news outlets have speculated that China’s invasion of Taiwan might be next — and weapon manufacturers might already be planning ahead.

Lockheed Martin teamed up with Raytheon Technologies in 2017 to start production on Javelin anti-tank missiles, which are now being delivered to Ukraine. Original reports also mention intentions to deliver these missiles to Taiwan, a nation that the Chinese Communist Party (CCP) has repeatedly threatened to forcibly reunite with mainland China.

Since the Biden administration has approved a $750 million deal with Taiwan (the U.S. has a history of selling weapons to Taiwan since the Jimmy Carter era), media outlets have painted the narrative that the Taiwanese civilian soldiers watching Putin’s invasion of Ukraine are worried that “they aren’t prepared to defend their island” from mainland China.

How Has The Perception of Americans Shifted?

Some op-eds — written by people with ties to defense contractors and published by major media outlets — may lead readers to think that there’s more support for U.S. involvement.

Sending military weapons to Ukraine is a controversial strategy that some say is necessary while others believe would only further escalate the Russia-Ukraine conflict. But majorities of the U.S. public seem to support it. The Associated Press-NORC Center for Public Affairs Research interviewed 1,082 adults between March 17-21 and found that 64% of U.S. adult citizens favor sending weapons to Ukraine.

Watching Putin’s military forces march through Ukraine and demolish residential buildings on a daily basis is the most evident reason why more Americans would want to send weapons to Ukraine.

But regardless of what stance Americans take on sending weapons to Ukraine, the media should be held accountable when the biases of the voices they promote are not clear. The media should make all conflicts of interest transparent, whether due to financial ties to the defense industry that might benefit from a military conflict or financial ties to corporations with Russia business dealings that would profit by avoiding any conflict.

Not only will this help readers come to their own conclusions on the conflict at hand, but potentially prevent another Iraq War situation from happening again.

This is why AllSides believes it’s so important to provide our readers with a balanced mix of perspectives across the political spectrum.

Just as the media’s role is to keep the U.S. government in check, it’s also important to keep the media accountable for its actions.

Use AllSides’ balanced newsfeed, Media Bias Ratings and guide for How to Spot Types of Media Bias to avoid manipulation, get the full picture and think for yourself.