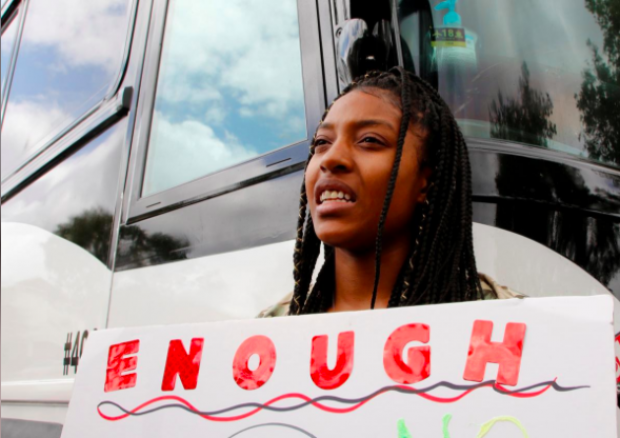 In the aftermath of the Parkland shooting, students from Florida are pushing for increased gun control measures, such as a ban on assault weapons. After leading several protests across the state, a group from Stoneman Douglas High School appeared in a town hall led by CNN on Wednesday evening with Republican Sen. Marco Rubio, Democratic Sen. Bill Nelson, and NRA spokesperson Dana Loesch. The media's reaction to their activism has varied; many on the Left have praised their efforts, while some on the Right argue that children should not be leading the conversation.
Other news from AllSides:
Snippets from the Center
Survivors of Florida school shooting launch gun control push
Reuters
"Last week’s massacre, the second-deadliest shooting at a public school in U.S. history, has inflamed a national debate about gun rights and prompted young people from Marjory Stoneman Douglas High School and across the United States to demand action for stricter firearms controls.
...
The youth-led protest movement that erupted within hours of the shooting attracted prominent celebrity supporters on Tuesday when film star George Clooney and his wife Amal, a human rights lawyer, said they would donate $500,000 to help fund a planned March 24 gun control march in Washington.
...
Students and parents elsewhere in Florida and in other states, including Tennessee and Minnesota, staged sympathy protests on Tuesday, according to local media reports. Miami’s WTVJ-TV showed video of about 1,000 teens and adults marching from a high school in Boca Raton to the site of the Parkland shooting, about 12 miles (20 km) to the west."
Snippets from the Right
Do Not Let the Children Lead
Michelle Malkin for National Review
"Where are all the grown-ups in times of crisis and grief? Don’t bother searching America’s prestigious law schools.
Two adult men, occupying lofty perches as law professors, argued this week that the voting age in the U.S. should be lowered to 16 because some high-school survivors of the Parkland, Fla., shooting who want gun control 'are proving how important it is to include young people’s voices in political debate.'
That was the assertion of University of Kentucky law professor Joshua Douglas on CNN.com. He praised some student leaders at Marjory Stoneman Douglas High School who’ve been making the rounds on TV, shouting at President Trump, Republicans in Congress, and the NRA 'to demand change' — which Douglas defines obtusely as 'meaningful gun control,' whatever that means.
...
This is not compassion, but abdication. America is not a juvenilocracy. It is a constitutional republic. There is a reason we don’t elect high-school sophomores and juniors to public office or allow them to cast ballots.
...
It’s fine to listen, but do not let the children lead."
Snippets from the Left
The Parkland Teens Will Win. Eventually.
Slate
"The shape of the Parkland, Florida, shooting’s aftermath is unlike that of any other American massacre. For the first time, the teenage survivors of a school shooting have assumed the mantle of leading the activist response to the tragedy. Their courage in the face of fear and loss has inspired several nationwide actions this week, including student-led walkouts at middle schools and high schools in Virginia, Maryland, Arizona, and Kentucky, among other states.
...
Those who’ve watched children slaughtered in their classrooms many times over with no discernible change in gun-control policy or decline in American gun ownership may have reason to doubt that any of these activist measures will accomplish what the others have not. None of the organizations founded after other massacres have shifted the U.S. gun-control conversation in meaningful ways, jolted the general public into a new sense of urgency, or changed the hearts and minds—and, more importantly, the votes—of legislators.
...
The Parkland activists are inspiring, and inspired by, a new generation of leaders who feel confident in their power, and who know how to use social media for effective organizing. That’s partly a credit to Black Lives Matter actions, which prompted students to rise up in Ferguson, Missouri; Baltimore; and around the country, and the Women’s March itself, which encouraged young feminists to see themselves as part of a broader, intersectional movement. A teenager’s lack of experience in social-justice organizing is also her strength: She sees possibilities and promise where adults are too tired or cynical to go. An issue as divisive and urgent as guns, which seems to set people on one of two mutually exclusive planes of reality, demands that fresh perspective."
Discover more on this topic on AllSides.
Gun Legislation, Florida School Shooting, Story Of The Week, News