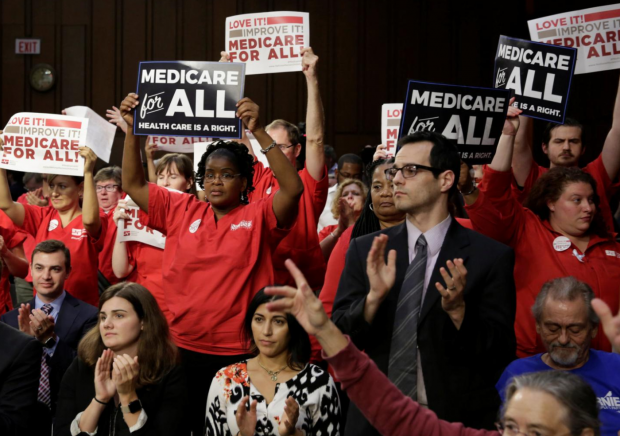 On Wednesday, Independent Senator Bernie Sanders revealed a "Medicare-for-all", also known as single payer, healthcare plan backed by sixteen of his Democratic colleagues. With only a third of Democratic senators behind the plan, speculation being that those up for reelection in 2018 are staying away, it is unlikely at this point that it will make it very far in the process. However, this move shows the direction the Democratic party might be moving towards in regards to policy.
Other news from AllSides:
Snippets from the Left
Bernie Sanders: Why We Need Medicare for All
The New York Times
"Even though 28 million Americans remain uninsured and even more are underinsured, we spend far more per capita on health care than any other industrialized nation. In 2015, the United States spent almost $10,000 per person for health care; the Canadians, Germans, French and British spent less than half of that, while guaranteeing health care to everyone. Further, these countries have higher life expectancy rates and lower infant mortality rates than we do.
The reason that our health care system is so outrageously expensive is that it is not designed to provide quality care to all in a cost-effective way, but to provide huge profits to the medical-industrial complex. Layers of bureaucracy associated with the administration of hundreds of individual and complicated insurance plans is stunningly wasteful, costing us hundreds of billions of dollars a year. As the only major country not to negotiate drug prices with the pharmaceutical industry, we spend tens of billions more than we should."
Medicare for all: Does America really want it?
CBS News
"Americans are not clamoring for single-payer health care, as Sen. Bernie Sanders suggests they are, in proposing a plan that would have the government foot most medical bills.
He's right that support for the idea has grown and in some polls tops 50 percent. But polls suggest that the prevailing sentiment is ambivalence.
Saving money on health insurance holds lots of appeal. Seeing taxes rise to cover those costs may dull the appetite.
Sanders' plan, released Wednesday, would have the government finance coverage now paid for by a mix of employers, their workers, public plans and people in the individual insurance market. He's not given details of the likely cost or how, exactly, he'd pay for it."
Snippets from the Right
No to Single-Payer
National Review
"Senator Sanders’s arguments are heavy on populist bromides. He says the path toward single-payer ought to be straightforward, and sinister corporate interests are the only obstacles standing in the way. But the truth is that a plan like his would threaten people’s existing coverage. While insurance companies certainly want to stay in business, the fundamental roadblock to single-payer is not that politicians are beholden to them. It’s that many Americans are satisfied with their current coverage and would like to keep their doctors.
...
Weaker iterations of single-payer try to evade the problem by allowing people to keep their coverage, at least initially: Consumers can buy in to the public system if they so choose, but are not forced into it. But for the public plan to be workable, it would have to attract consumers. And to attract consumers, the system would have to be made attractive. That costs money. "
Snippets from the Center
Liberal, conservative lawmakers offer opposing U.S. healthcare ideas
Reuters
"U.S. senators unveiled two opposing visions of a healthcare system in the United States on Wednesday - leading liberals advocating government insurance for all and several Republicans proposing an eleventh-hour repeal of Obamacare to replace it with programs run by the states.
Neither plan was thought likely to succeed in a Congress exhausted with fighting over the issue, raising questions over whether lawmakers would instead prop up the health benefits offered under former President Barack Obama’s healthcare law."
Discover more on this topic on AllSides.
Tags:
News
Story of the Week
Healthcare
Medicare
Single-payer system
Bernie Sanders