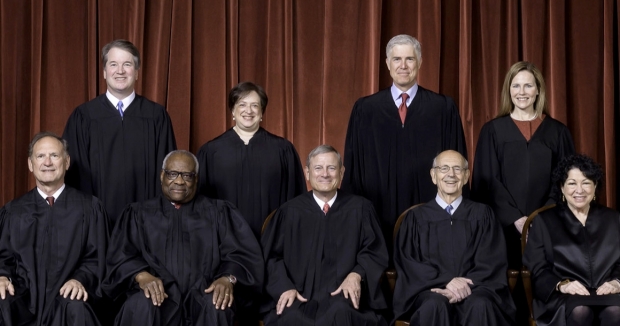 Image: Collection of the Supreme Court of the United States

Justice Sonia Sotomayor, who is diabetic and at high risk of serious illness from COVID-19, has been participating in court activities virtually. While the other justices have worn masks during the Omicron surge, Justice Neil Gorsuch, who normally sits next to Sotomayor, has not worn a mask. Along with being regularly tested for COVID-19, all of the justices are vaccinated and boosted.

Was the NPR report accurate? How did the media react? Let’s get into it.

Note: The bias rating of NPR’s online news is currently under review at AllSides due to user feedback. An Oct. 2021 Editorial Review found NPR’s online news to be “on the border of Center and Lean Left.” NPR will be included in the next Blind Bias Survey. Sign up for email alerts about the survey here.

On Tuesday, Jan. 18, NPR published an article by legal affairs correspondent Nina Totenberg titled “Supreme Court justices aren't 'scorpions,' but not happy campers either.” By Wednesday, the headline had been changed to “Gorsuch didn't mask despite Sotomayor's COVID worries, leading her to telework.”

Central to the article was the reported fact that Roberts had asked Gorsuch, who was appointed by former President Donald Trump, to wear a mask. Here’s how Totenberg explained the situation, which she described as “jarring”:

“Now, though, the situation had changed with the omicron surge, and according to court sources, Sotomayor did not feel safe in close proximity to people who were unmasked. Chief Justice John Roberts, understanding that, in some form asked the other justices to mask up.

They all did. Except Gorsuch, who, as it happens, sits next to Sotomayor on the bench. His continued refusal since then has also meant that Sotomayor has not attended the justices' weekly conference in person, joining instead by telephone.”

Totenberg did not expand on who her “court sources” were.

Totenberg was generally critical of Gorsuch, describing him as a “prickly” justice “from the beginning of his tenure.” The rest of the article connects these smaller alleged conflicts to the larger politics of the court, with particular attention paid to the court’s supermajority of conservative justices.

NPR was not the only outlet to publish original reporting on Gorsuch not wearing a mask. CNN (Left) published an article by Supreme Court reporter Ariane de Vogue on Tuesday, titled “Gorsuch declines to wear mask, as bench-mate Sotomayor works from her office.” Here’s how de Vogue explained the situation:

“Supreme Court Justice Sonia Sotomayor has been listening to arguments remotely from her chambers because she doesn't feel comfortable sitting on the bench near colleagues who are not masked, including Justice Neil Gorsuch, according to a source familiar with the situation.

In addition, Sotomayor has been participating in the justices-only conference sessions remotely, a court spokeswoman confirmed. Those sessions -- where only the nine are allowed, no staff or hangers-on -- is where the justices debate and essentially determine the legal direction of the country.

Since January, amid the surge of the Omicron variant of the coronavirus, all of the justices have worn masks on the bench, except for Gorsuch. In the ornate courtroom, he sits next to Sotomayor.”

Like Totenberg, de Vogue cited an anonymous source, described only as “a source familiar with the situation.”

“A source at the Supreme Court says there has been no blanket admonition or request from Chief Justice Roberts that the other Justices begin wearing masks to arguments.

At least three journalists, each with at least one anonymous source. Is one of the sources lying, or is their disagreement a product of miscommunication?

On Wednesday, Sotomayor and Gorsuch issued a joint statement on the story. Some coverage in outlets like CNN (Left) described such joint statements as “rare.”

Here is the full statement:

“Reporting that Justice Sotomayor asked Justice Gorsuch to wear a mask surprised us. It is false. While we may sometimes disagree about the law, we are warm colleagues and friends.”

It should be noted that the NPR report said Roberts, not Sotomayor, asked the justices to wear masks. SCOTUSblog (Center) Editor James Romoser called the incongruence "odd."

This is an odd statement because I'm not aware of any reporting that said Sotomayor asked Gorsuch to wear a mask. @NinaTotenberg's story reported that ROBERTS, not Sotomayor, asked all justices to mask up. @Arianedevogue's story this a.m. also did not say that Sotomayor asked. https://t.co/wYshZadDvv

Totenberg stood by her reporting on Wednesday in a report titled “Supreme Court hears arguments on campaign finance law, issues statement on NPR report.” The following is Totenberg’s explanation:

“On Wednesday, Sotomayor and Gorsuch issued a statement saying that she did not ask him to wear a mask. NPR’s report did not say that she did. Then, the chief justice issued a statement saying he ‘did not request Justice Gorsuch or any other justice to wear a mask on the bench.’ The NPR report said the chief justice’s ask to the justices had come ‘in some form.’

NPR stands by its reporting.

What is incontrovertible is that all the justices have at once started wearing masks — except Gorsuch. Meanwhile, Sotomayor has stayed out of the courtroom. Instead, she has participated remotely in the court’s arguments and the justices’ weekly conference, where they discuss the cases and vote on them.”

De Vogue addressed the rebuttal in a more limited fashion. In an article titled “Sotomayor and Gorsuch say they are 'warm colleagues and friends' amid masking dustup,” De Vogue wrote that “CNN has reported that Sotomayor did not ask Gorsuch directly to wear a mask.”

Bream tweeted out the justices’ denial of the NPR report but did not appear to offer additional commentary.

While outlets on the left were more likely to report on the original NPR story, outlets across the spectrum reported on Sotomayor and Gorsuch’s statement. Headlines included:

Outlets on the right were generally more likely to tie the story directly to NPR. However, some Right rated outlets seemed to directly criticize NPR, portraying its article as a “smear job,” a “false story” or simply “gossip.” Headlines included:

Several outlets on the left published opinion and analysis articles on the story, often criticizing Gorsuch even without Roberts' alleged request. Headlines included:

Freelance commentary writer Drew Holden called the NPR story “misinformation” that got “mainstreamed by the corporate press” in a tweet thread. He said the NPR story’s allegations were “debunked” because of statements from Sotomayor, Gorsuch and Roberts.

An explosive story from @NPR and @NinaTotenberg about supposed high drama around masking at the Supreme Court imploded today.

I want to take you through how misinformation like this gets mainstreamed by the corporate press and others.

On Thursday, NPR Public Editor Kelly McBride called for “a clarification, but not a correction,” arguing that Totenberg’s “reporting was solid, but her word choice was misleading.” McBride continued:

“Totenberg and her editors should have chosen a word other than ‘asked.’ And she could have been clear about how she knew there was subtle pressure to wear masks (the nature or even exact number of her anonymous sources) and what she didn't know (exactly how Roberts was communicating).

Totenberg and other Supreme Court watchers know that executive messages are conveyed with subtlety and diplomacy, not by clear edict. Adding that small detail, along with more information about her sourcing and a more accurate verb, would have provided a fuller picture.”

Later that night, Totenberg told the Daily Beast (Left) that McBride “can write any goddamn thing she wants, whether or not I think it’s true,” adding, “She’s not clarifying anything!”

According to the Washington Post, NPR Chief Communications Officer Isabel Lara reiterated NPR’s support of Totenberg on Friday, saying McBride “is independent and doesn’t speak on behalf of NPR.” McBride writes for NPR as part of a partnership with Poynter (Center), where she serves as Chair of the Craig Newmark Center for Ethics and Leadership.

What Should News Readers Make of All This?

There are three key questions to ask about this story:

If Roberts said or did nothing that could be interpreted as “asking” or “suggesting” justices to wear masks, then the answer to the first question is simple: the specific claim about Roberts could be considered “misinformation” and NPR should issue a correction.

However, if Roberts did indicate a preference for mask wearing in a way that Totenberg or her source interpreted as “asking” the justices to wear masks, then the NPR source didn’t lie and this question shifts from the realm of facts to the realm of subjective interpretation.

There’s also the case of the Fox News source, who said that “there has been no blanket admonition or request” from Roberts, and that Gorsuch did not refuse a request to wear a mask.

Could Roberts have made a request “in some form” that was not a “blanket admonition or request” and did not meet his own definition of a “request”? Maybe. But either way, we don’t know.

There’s another factor to consider: the Supreme Court justices have a strong incentive to appear united. Despite America’s polarized politics, the Supreme Court is supposed to be a nonpartisan institution, with justices free from the threat of electoral defeat. Even if they did have internal disagreements on politically polarizing issues, they may feel a duty to appear united for the sake of the institution they serve.

But again, we simply don’t know if this had an impact on the justices’ statements denying the NPR report.

Furthermore, the news media has a strong incentive to create the appearance of conflict even when there is none. Outlets like NPR and CNN get more clicks when they make high-profile conservative figures like Gorsuch seem like they’re involved in controversy. Outlets like Fox News get clicks when they criticize the “liberal media.” And AllSides gets clicks when it portrays any of these outlets as biased.

Everyone who wrote about this story got something out of it — regardless of the truth.

Which brings us to the final question: without the claim that Roberts asked justices to mask up, is this still a newsworthy story?

Much of the left's reporting and commentary focused not on the alleged Roberts request but on the fact that Gorsuch knew Sotomayor had health concerns and still did not wear a mask. Of course, it’s unknown whether Sotomayor would still participate virtually if Gorsuch masked up, but the connection is clearly implied.

For many on the right, the justices' denial was the end of it. If no one asked Gorsuch to mask up, he couldn't have refused any such request. And, it seems, only a denial of a request would be newsworthy. The difference between the left and right here likely stems from differences in how each side feels about masks.

Regardless of either side's narrative, what remains is a conservative not wearing a mask despite a liberal’s health concerns — a story perfectly crafted for today’s polarized media environment.

Is that newsworthy on its own? Depends on who you ask.

This piece was written by Daily News Editor Joseph Ratliff. He has a Lean Left bias.