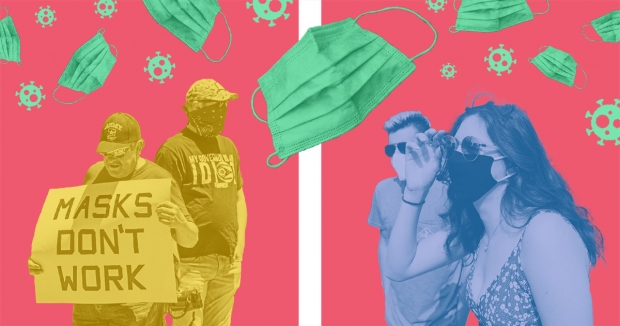 Many of us are familiar with virtue signaling on social media. Simply put, people post content that makes them appear to be good people.

For the past year, masks and vaccines have been the new, IRL virtue signaling — and, since we largely disagree on what true virtue is, they are continued drivers of political polarization.

Pre-2020, we were already bitterly divided. The virus made that worse, and now, with new CDC guidelines saying that the vaccinated can go unmasked, it’s left a dilemma for those who were using the presence or absence of a mask to determine someone’s political views or trustworthiness/untrustworthiness. Now, it's harder to tell who is in your ideological camp or not — who fits your idea of virtue.

Virtue is a standard of moral excellence and righteousness. The best example of virtue signaling is when people post and share social media content that publicly signals they are a virtuous and good person.

Virtue-signaling is the key driver behind the sharing of nearly all social media content, and people may want to signal any of the key virtues.

Yet what is and is not virtuous behavior is often the biggest driver of political polarization.

Some people think it’s virtuous to attend protests and marches focusing on big political issues; others would say it’s more virtuous to focus on what is within your immediate control.

Some people think it’s virtuous to “live and let live” and not enforce standards of dress or behavior; others say we need to enforce societal rules that ensure maximum well-being.

Masked or Unmasked, Vaxxed or Unvaxxed: Who is More Virtuous?

As masks and vaccines become the new markers of virtue, we are seeing Americans more polarized than ever on what is the right course of action. Especially since the CDC issued new guidelines stating that fully vaccinated people don’t have to wear masks in public, it's hard to know who is in your ideological virtue tribe.

Big news from the CDC: If you’re fully vaccinated, you do not need to wear a mask – indoors or outdoors, in most settings.

We’ve gotten this far. Whether you choose to get vaccinated or wear a mask, please protect yourself until we get to the finish line. pic.twitter.com/XI4yPmhWaD

A recent New York Times (Lean Left) article titled Mask? No Mask? New Rules Leave Americans Recalibrating, Hour by Hour, explained how we used to have an “easy” way to “label” one another as liberal or conservative, free thinker or sheep, compassionate or heartless, smart or silly — or any of the other polarizing beliefs we adopted about one another based on their beliefs about official Covid-19 guidelines and rules:

“Over the last year, as Republicans pushed back against mask mandates, some Democrats wore masks even while outdoors and alone, and updated their Facebook profile photos to show their mouths and noses covered...The new guidance seemed to scramble all the presumptions people had come to understand about who wears masks and who does not.

Someone with no mask might still signify that they oppose masks and doubt the risks of Covid-19 — or it now might mean the person is fully vaccinated and following C.D.C. guidance to the letter. And someone with a mask might now be signaling their support for virus-control efforts but rejection of the latest C.D.C. guidance — or it might mean that a person is unvaccinated and following the rules to stay masked. Or it might mean something else altogether. Easy labels have vanished.”

Throughout the last year, people who obeyed mask mandates were generally assumed as believing a number of things:

Meanwhile, those who were not wearing a mask could generally be assumed to believe any or some of the following:

It was easy to divide ourselves into two camps:

The masked and unmasked.

The believers in science and the conspiracy theorists.

The sheep and the patriots.

Now that the CDC has said those who are fully vaccinated don’t need to mask up, this easy-to-spot, public measure of political beliefs and virtue has been lost. We may no longer be so publicly branded in our views. That’s why some are saying they’ll keep wearing masks simply so they aren’t seen as being part of the group they disagree with:

I feel the need to continue wearing my mask outside even though I’m fully vaccinated because the inconvenience of having to wear a mask is more than worth it to have people not think I’m a conservative — David Hogg (@davidhogg111) May 14, 2021

And some of those who previously trusted the CDC and followed all the guidelines now distrust the new guideline, saying it’s too early to lift mask mandates:

The CDC went from recommending outdoor masking (way too precautious!) to triggering a cascade of indoor unmasking (seems a little early!) in like 17 days without any material change in the underlying science. https://t.co/fOfzs8TTn4— Derek Thompson (@DKThomp) May 14, 2021

Some are pledging to continue wearing masks out of distrust of people who choose not to get the vaccine:

2. Having seen the extreme selfishness of some Americans, I do not trust strangers not to go maskless in public while unvaccinated. I will therefore do what is within my power to protect myself and my loved ones.— Margaret Russell, MD (@Margaret1473) May 14, 2021

Others say it’s authoritarian coercion to give citizens ultimatums:

In a calculated attempt to sow division, Harris-Biden doubted scientists’ abilities to develop vaccines under 45, only to inherit the rollout on 3rd base. Now they’re deploying authoritarian tactics against American people and ignoring their concerns. Hypocrisy knows no bounds. https://t.co/1IkJSHOTm3— 48™ (@fadde) May 17, 2021

And still others are still saying we should never have trusted guidelines in the first place:

You guys do know that the CDC lifting those guidelines out of the blue with no solid explanation proves they lied to you the whole time about everything, right?

Just want to make sure everyone has processed that correctly.— Jesse Kelly (@JesseKellyDC) May 15, 2021

The polarization is still in place, even if the public markers of it are disappearing.

CBS News (Lean Left bias) interviewed psychotherapist Kathryn Smerling about the idea of people wanting to continue wearing a mask, even if they accept that going without one is probably safe.

"I don't think there's anything wrong with wearing a mask," she said. "It's all a personal comfort and I don't believe that people should denigrate each other for either wearing a mask or not wearing a mask. It's your own psychological safety and that has to feel comfortable for you."

Not all therapists agree, though.

In Evie Magazine (Lean Right bias), therapist Yuzo Kikumoto said some of his clients had grown accustomed to living anonymously behind a mask and couldn't stop, signaling addiction.

"While some people used to feel safe or secure when going out with a mask, it has reached a stage where they cannot go out without wearing a mask. That's how serious it is getting," Kikumoto said. "The mask acts as a security blanket, and people with this addiction cannot talk to people without wearing a face mask. And society's acceptance of interactions behind masks perpetuates such a dependency.”

In the last year and a half, public health officials said frequently that facemasks did wonders to stop the spread of COVID-19 (and now want people to keep wearing them to combat the cold and flu, commonly done in Asia). Other health professionals strongly disagreed.

Many Americans made major adjustments to their lives over the past year, and are just now beginning to return to normalcy. Others refused to live differently — when they could help it, at least — as an act of resistance. Yet divides over safety and freedom will persist, and people will continue to draw different conclusions from public health mandates and guidelines.

To some, the virus is a public health crisis, and distancing, masking and getting vaccinated are virtuous — to others, it is manufactured fear meant to shake the foundations of freedom, and resistance to tyrannical control is the true mark of virtue.

No matter your stance, do your best to understand where others are coming from — even (and especially) if you don’t agree.

We’re not going to get on the same page any time soon. But being able to understand views that diverge from your own instead of adopting mischaracterizations of the other side should be something everyone can get behind. Julie Mastrine is the Director of Marketing at AllSides. She has a Lean Right bias. Managing Editor Henry A. Brechter contributed to this piece; he has a Center bias. This piece was reviewed by Daily News Specialist Joseph Ratliff; he has a Lean Left bias. Joseph also created the graphic atop the page.