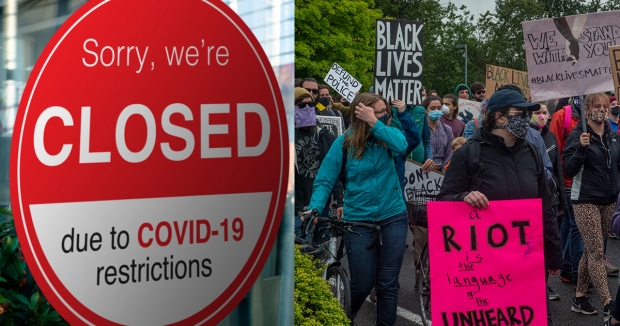 Two stories that were big in media outlets rated by AllSides as having biases on the right were not covered by major left and center-rated media outlets this week.

The first story left and center outlets omitted was a study authored by a Johns Hopkins University professor and others who that found COVID-19 lockdowns in the U.S. and Europe did not significantly reduce mortality. The researchers conclude that lockdown policies "should be rejected out of hand as a pandemic policy instrument,” saying they "reduced COVID-19 mortality by 0.2% on average.” The paper notes that “the views expressed in each working paper are those of the authors and not necessarily those of the institutions that the authors are affiliated with.”

The second story not mentioned by one side of the press is the Black Lives Matter Global Network Foundation shutting down its online fundraising after both California and Washington ordered it to stop collecting donations. BLM reportedly failed to disclose information about its 2020 finances. A Washington Examiner (Lean Right) investigation “found that BLM has had no known leader in charge of its $60 million bankroll since its co-founder resigned in May.” BLM’s charity registration is also reportedly out of compliance in Connecticut, Maine, Maryland, New Jersey, North Carolina and Virginia, according to the Examiner.

Outlets On the Right Covered the Stories; Outlets on the Left and Center Did Not

At the time of this writing (Feb. 3, 3pm CT), The lockdown study was notably covered by the right and not the left or center. Outlets that covered the story were:

The only outlet on the left to cover it was fact check outlet Snopes (Lean Left), which focused on very different aspects of the study than right-rated outlets (more on that below).

Similarly, The Black Lives story was only covered by the following major outlets (some smaller blogs covered the story, too; they are not noted here):

The only outlet on the left to cover the BLM story was Yahoo (Lean Left), which republished the piece by National Review. (Did we miss a story? Email us.)

Why These Stories Deserve Attention

Arguably, both of these stories deserve coverage due to being developments in two major storylines that have dominated the press since 2020: the COVID-19 pandemic and the Black Lives Matter movement.

People around the world were locked down inside their homes for weeks or months at the beginning of the coronavirus pandemic. One third of the world was in some kind of lockdown in April 2020, and Australia has remained one of the most locked-down countries in the world. News outlets that repeatedly referred to Johns Hopkins University’s COVID-19 Map to report case numbers — which fed support for lockdowns — have not covered the new study.

From the beginning of the COVID-19 pandemic, commentators and politicians on the right were more likely to question the use of lockdowns to control the virus, while commentators, media outlets and politicians on the left were more likely to support lockdowns. Democratic governors were quicker to issue stay-at-home orders, and governors in red states like Florida and Texas were heavily criticized for declining to re-implement lockdowns in 2021. In 2020, AllSides wrote about how the media was more likely to frame anti-lockdown protesters negatively/as contributing to viral spread, while framing racial justice protests positively. It was just another way the left/right divide manifested in the United States. 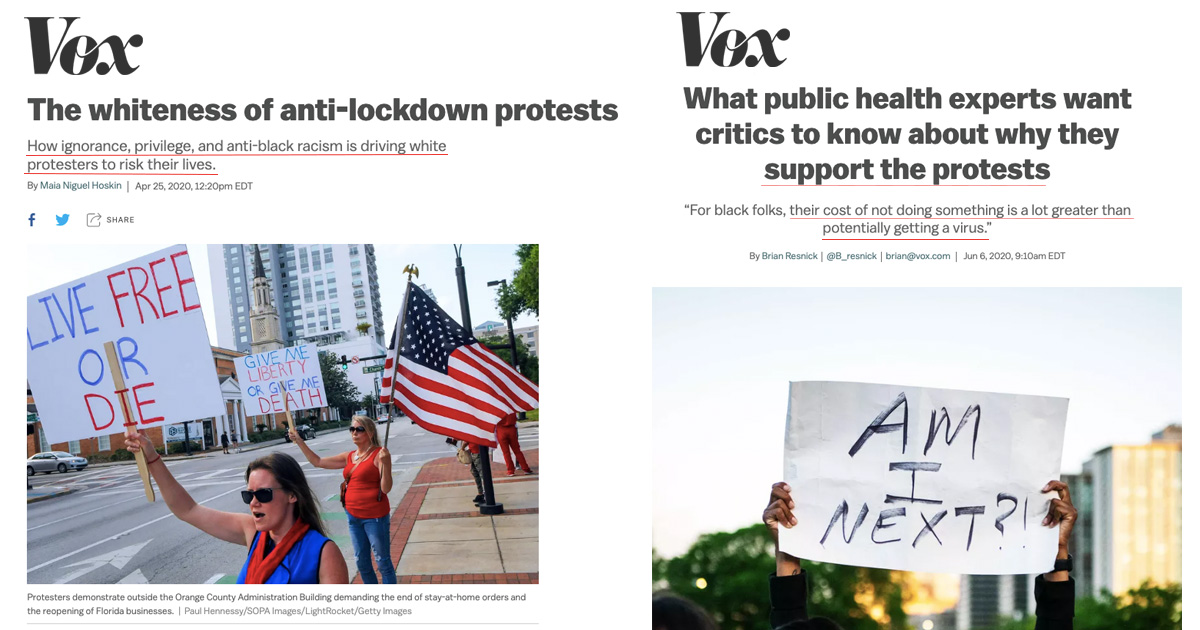 Perhaps most notably related to the news about BLM’s finances, corporations donated tens of millions of dollars to the group and related groups and causes. At least 18 companies donated or pledged to donate money directly to the BLM Global Network Foundation, according to a list compiled by the Washington-based Capital Research Center. Major corporations like Apple, Amazon, Home Depot, Walmart, Etsy, Wendy’s, Target, H&M, Coca-Cola, Peloton, and Ubisoft — to name only a few — signaled support for BLM in statements posted to social media, as well as made public commitments to donate.

Considering all of this backstory — only a fraction of which is recounted here for both storylines — it seems at least notable that BLM has shut down its donations and that a study has concluded lockdowns are mostly ineffective. Media outlets on both sides ought to have covered the developments.

Understanding Media Bias by Story Choice and Bias by Omission

Journalists are limited in their time, space, and resources, so they can’t possibly cover every story. Story choice is a type of media bias that can reveal the political leanings of a media outlet. That’s because story choice is always subjective in nature, as it requires editors to make a judgment call about whether or not a story is important or valuable for readers to know.

Story choice bias is closely related to media bias by omission, because noticing which stories one side chooses not to cover can also clue us in as to what the publication thinks is important or what they want to downplay.

Outlets on the right tend to highlight ethical concerns about progressive advocacy groups such as Black Lives Matter, while the opposite: left-rated outlets tend to cover conservative groups more critically. Meanwhile, each side typically tends to ignore problems with groups that align with their political side and ideology.

With the Johns Hopkins study, several factors likely played a role in left-rated sources deciding not to report on it: it was not peer-reviewed, it was conducted by economists rather than epidemiologists, the researchers included mask mandates in its definition of lockdowns, and it didn’t fit the common mainstream narrative that lockdowns were necessary to fight COVID-19. All of these things were noted by Snopes in its analysis of the study. For their part, media outlets on the right arguably engaged in media bias by omission by not including these details, or signaled writers and editors at those outlets did not find those details to be important.

The omission of stories about the Johns Hopkins lockdown study and Black Lives Matter’s financial issues shows why it is so important to read news across the political spectrum and to become aware of media bias.

Only by ingesting an unbiased, balanced news diet can you be sure you are getting the full story. Use AllSides’ balanced newsfeed, Media Bias Ratings, and guide to How to Spot Types of Media Bias to get the full picture and think for yourself.