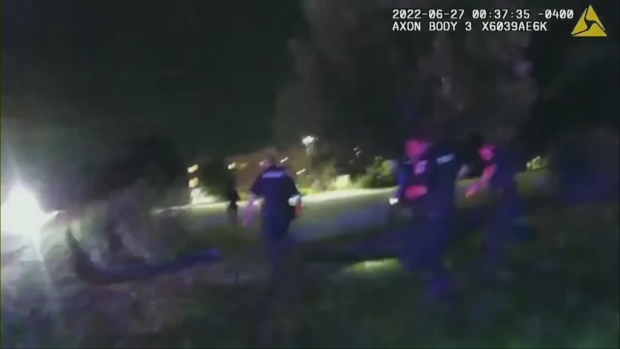 On June 27, Jayland Walker was asked to pull over by police for a traffic violation. When he refused, a car chase ensued. Police say a gunshot came from Walker's vehicle. Walker then jumped out of the car and ran from the police. The police pursued him on foot and deployed tasers, which they said were unsuccessful in stopping Walker. Police say they thought Walker “was moving into a firing position,” and that is when they shot at him. According to the medical examiner, Walker had at least 60 bullet wounds.

You can watch the video of the shooting yourself here.

Here’s a deep dive into how the Reuters article displayed bias in its coverage of this story.

The headline insinuates that the police are culpable by emphasizing the terms “unarmed” and “hail of bullets.” It’s not until later that the article mentions that the police believed Walker was armed at the time, that they believed a bullet was fired from the car, and that a shell casing and a weapon were recovered from the scene. Therefore, describing Walker as “unarmed” doesn’t tell the full story.

The article quotes the Walker family’s attorney early in the article, in paragraph 4, stating: “The attorney for the Walker family, Bobby DiCello, told reporters he was ‘very concerned’ about the police accusation that Walker had fired at officers from his car, adding that there was no justification for his violent death.”

But it’s not until paragraph 14 that Reuters gives the police chief’s side of the story. Later in the article, Reuters writes, “The officers said they had believed Walker was "moving into firing position" when he got out of his car, prompting them to react to him as a potential threat.”

The unbalanced quoting amounts to bias by viewpoint placement, which occurs when one view is either not included or is buried at the end of the article. A more balanced article would have positioned the attorney’s claims that there was no justification for the death right next to the police chief’s response.

The Reuters article links the death to other politicized police killings in the U.S., writing, “The shooting was the latest in a spate of killings of Black men and women by law enforcement in the United States that critics say are racist and unjustified, including the 2020 murder of George Floyd in Minneapolis that ignited global protests against police brutality and racial injustice.”

The use of the phrase “latest in a spate of killings” indicates spin, which is vague and dramatic language. By including this in the article, Reuters chooses to politicize the killing and imply that it was racially motivated. Linking the incident to police brutality and other killings seen as unjustified invites readers to view this incident in a political context and retreat to their sides of this issue, rather than to evaluate this case on its individual merits.

Slant is a type of media bias in which a reporter only shows one side of the story or ignores another perspective.

The Reuters article employs slant when covering subsequent protests. It mentions the protests that took place later that day at City Hall and again frames police unfavorably. They emphasize that outside City Hall, the protests were “peaceful.” Then they mention another protest outside of the Akron Police Department’s headquarters, stating that the police declared the protest an unlawful assembly and threw tear gas at protesters while armed with riot gear. Reuters fails to mention whether the protest outside APD was also peaceful, providing no details about protesters’ actions, nor do they mention if there were any repercussions for other protests in the area.

It’s not until the very end of the article that Reuters mentions that there was a bullet casing consistent with Mr. Walker’s weapon at the scene, supporting the claim he fired his weapon, according to the police. By burying this information at the end of the article and saying Walker was “unarmed” in its headline, Reuters further engages in slant, which occurs when certain pieces of information are highlighted or played down in order to frame the story in a biased way.

Reuters prequalifies the details about the bullet casing with “when pressed by reporters for evidence…” Paired with earlier statements that the Akron Police did not respond to a request for comment and that the officers, who were put on leave, did not release any individual statements, Reuters gives the impression that the police were not forthcoming with important details of the investigation and the following protests.

The Reuters article does not quote anyone who believes the shooting or dispersion of protesters with tear gas was justified, whereas they do quote the Walker family’s defense attorney and his opinion that the shooting was unjustified. They tie this event to George Floyd and frame the police as overreacting to peaceful protests. There was no mention of the property damage during the protests. Those editorial choices indicate an overall slant and bias toward a particular viewpoint on police killings and the racial justice movement throughout the Reuters article.

When articles group events together, such as George Floyd death with another police shooting, consider whether it's appropriate to group them together based on the facts of the case at hand.

Related: Should You Only Read News Outlets AllSides Rates as Center?

Also, consider that not all outlets rated as Center have neutral perspectives in all of their articles. Even when reading Center outlets, it is important to be vigilant in assessing different types of bias.