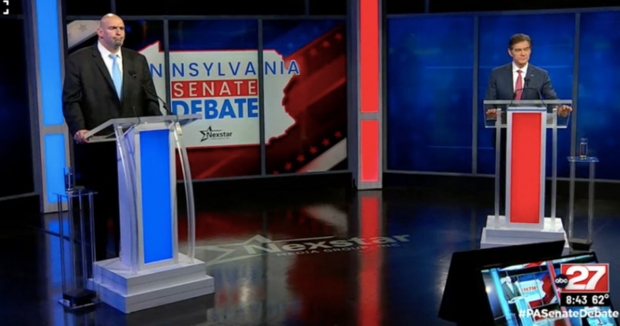 On Tuesday, a debate between Pennsylvania Democrat John Fetterman and Republican Dr. Mehmet Oz, both running for a Senate seat, earned much media attention. It was the first and only debate between the two, and was widely anticipated, particularly following Fetterman’s stroke in May which has impacted his communication abilities and led his campaign to refuse more debates.

In news coverage of the debate reviewed by AllSides, we found some difference in emphasis and tone, but somewhat surprisingly, not a lot of egregious examples of biased reporting. Interestingly, much coverage did not fall along on partisan lines.

Outlets on both sides highlighted Fetterman’s speech and response issues during the debate and apparent flip-flopping on fracking. Outlets across the spectrum said that Fetterman “struggled” during the debate. The most prominent form of bias was bias by viewpoint placement. Left outlets quoted medical professionals who spoke positively of his recovery as well as disability advocates, while conservative outlets quoted Oz’s campaign.

What the Left Did

What Both Sides Did

-Used the word “struggle” to report on Fetterman’s debate performance

What the Right Did

While Fetterman’s speech issues were center stage in much coverage, The Guardian (Lean Left) didn’t mention this until paragraph six, showing some bias by placement.

Two monitors transcribed the questions in real time to help him with auditory processing issues. AP’s coverage did not mention that Fetterman required closed captioning during the debate. CNN ran an article before the debate detailing this, but didn’t mention it in post-debate stories.

ABC News (Lean Left) and The Guardian (Lean Left) did mention this detail in coverage. Fox News didn’t mention this in its initial coverage, but ran follow-up stories about the disagreement between Nexstar and Fetterman’s campaign, the latter of which argued the closed captioning Fetterman received was slow and full of errors, which Nexstar denied.

During the debate, a moderator asked Fetterman if he would release his medical records, which he did not commit to. Both sides covered this. AllSides found coverage of this moment in two left-leaning media outlets NowThis (Lean Left) and Yahoo (Lean Left) (which reprinted a piece by The Hill, Center bias), as well as a mention in an AP/USA Today article. RealClearPolitics (Center) offered a transcript of Fetterman’s response, Washington Examiner (Lean Right) said he “ducked” the question, and Newsweek (Center) ran the headline, Fetterman Dodges Question on Releasing Full Medical Records.

Bias by Viewpoint Placement in Stories About Debate, Ableism

The New York Times (Lean Left) ran an article exploring How People With Disabilities Saw Fetterman’s Debate Performance. The piece offered some opinion presented as fact and subjective qualifying adjectives when the journalist stated (emphasis ours), “One in four Americans has a disability, but disabled politicians are rarely on the national debate stage. That made John Fetterman’s appearance a powerful moment, but public reactions were painful.”

ABC News (Lean Left) ran a similar piece titled, “Fetterman and Oz debate highlights ableism in politics, advocates say.” Fox News seemingly mocked this story angle, running the headline, “ABC News, New York Times rush to defend Fetterman, blame ‘ableism’ for reactions to Pennsylvania debate.” This is again analysis presented as fact, with Fox offering its interpretation of what the articles mean (that ABC and New York Times are “defending” Fetterman by highlighting these voices). ABC reported on what disability advocates are saying, rather than explictly endorsing their claims itself. ABC quotes four disability advocates, and shows some imbalance by not quoting anyone outside of the Oz campaign who has concerns about Fetterman’s condition. The article does represent story choice bias, as it’s unlikely a lean right outlet would highlight these voices.

Fox News showed bias by viewpoint placement in its initial coverage, leading with “the Oz campaign declared victory” and a statement from the campaign. AllSides did not find the Oz campaign statement present in articles reviewed from left-leaning outlets.

Meanwhile, AP showed similar bias by viewpoint by prominently noting “independent experts consulted by The Associated Press said Fetterman appears to be recovering remarkably well.” They quote a doctor and a speech pathologist who speak positively about Fetterman’s health condition, and didn’t include any voices who are concerned or have a negative view of what his condition could mean for the job of Senator. Overall, AP’s article focused much more on Fetterman than on Oz, showing some slant.

While Fox News showed bias by quoting Oz’s campaign prominently, AP showed bias in the opposite direction when it only quoted Democratic strategist Paul Begala’s tweet.

AP also noted that Fetterman’s speech issues were “no surprise for medical professionals, who noted that the format, including time limits on answers, was the opposite of what a person recovering from a stroke would need to support his communication. And for those who have known Fetterman for years, the debate was a reminder that he was never a smooth orator — even before the stroke.” Saying Fetterman was “never a smooth orator” is subjective and represents the journalists’ opinion. This shows spin and analysis presented as fact. AP also used spin words that seemingly showed favor for Fetterman when it said he is “a star in progressive politics nationwide.”

Breitbart (Right bias) led its coverage by noting Fetterman’s stumble at the beginning of the debate, writing, “The trouble for Fetterman started while responding to the first question when he said, ‘Hi, goodnight, everybody,’” a moment AllSides didn’t see reported in other media coverage reviewed.

Outlets across the spectrum noted Fetterman’s supposed flip-flopping on fracking. After leading with quotes from people who felt positively about Fetterman, AP offered some analysis presented as fact and subjective qualifying adjectives, but falling not on partisan lines. The journalist wrote [emphasis ours]:

“When pressed to explain his shifting position on fracking, a critical issue in a state where thousands of jobs are tied to natural gas production, his answer was particularly awkward.

CNN’s coverage of the debate, “Six takeaways from the Pennsylvania Senate debate between Fetterman and Oz,” was notably less charitable toward Fetterman than AP’s. The outlet noted that Fetterman’s “delivery was at times halting and repetitive, with the Democrat – who suffered a stroke in May – dropping words during answers and occasionally losing his train of thought.” They also flat-out stated that Fetterman’s insistence during the debate that he supports fracking “isn’t true.” CNN also noted that “the Fetterman campaign went to great lengths to avoid debating,” something other left outlets did not highlight.  It should be noted, however, that CNN’s coverage largely reads as analysis but is not labeled as such — again showing analysis presented as fact.

Predictably, some left and right outlets ran very different opinion articles about the debate. New York Post opinion (Right bias) ran the piece, “John Fetterman debate was painful and shameful — he is physically incapable of being a senator.” Fox News commentator Tucker Carlson (Right bias) stated it was a “full-blown 30-car Amtrak derailment for Fetterman. If that guy’s elected senator from the state of Pennsylvania, you’ll have real concerns about the system being legitimate.”

RELATED: Headline Roundup: Is John Fetterman Healthy Enough to Serve in the Senate?

Slate (Left bias) ran the piece, Actually, John Fetterman’s Debate Performance Was Fine. Meanwhile, The Philadelphia Inquirer’s (Lean Left) opinion board, which has endorsed Fetterman, rated Fetterman’s performance as higher than Oz’s by averaging the scores of each opinion writer’s assessments of both candidates. The Inquirer found Fetterman had a 4.3 rating out of 10, while Oz had a 4.1. Both Breitbart and Fox News ran headlines on this, with Fox News using sensational words to describe it [emphasis ours]: “Philadelphia Inquirer staff shredded for saying Fetterman won debate with Oz: ‘Clown world in action'” and Breitbart: “Clown Show: Philadelphia Inquirer Staffers Say John Fetterman Won Debate.”

The cases of media bias in Fetterman/Oz debate were not as partisan as we may have expected. While outlets showed biased viewpoint placement, there were also many similarities in coverage.

While we often rely on media outlets to give us coverage of events we can’t personally attend, they can sometimes present a biased view. Watching the debate for yourself can be a good way to see if news coverage matches up to reality.