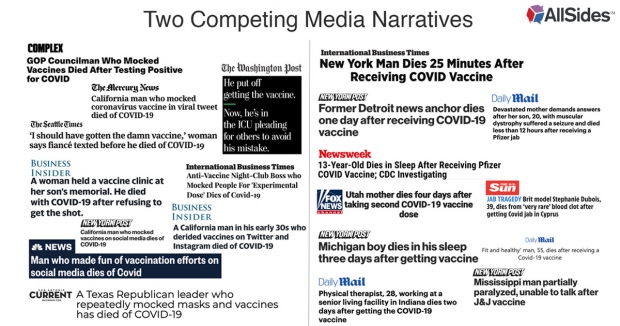 Should the media share stories about people’s health decisions leading up to their deaths?

These stories have been all over the press lately, and reveal media bias by story choice. They are meant to affect what we feel and believe about COVID-19 and vaccines, and to impact our own health decisions.

These anecdotal stories have been seen on both sides. Some headlines, mostly from outlets AllSides rates as having a Left or Lean Left media bias rating, showcase people who stated on social media that they didn’t want a vaccine, or were skeptical of them, and then died after a COVID-19 infection. Other headlines highlight people who didn’t get the vaccine and are now in the hospital. 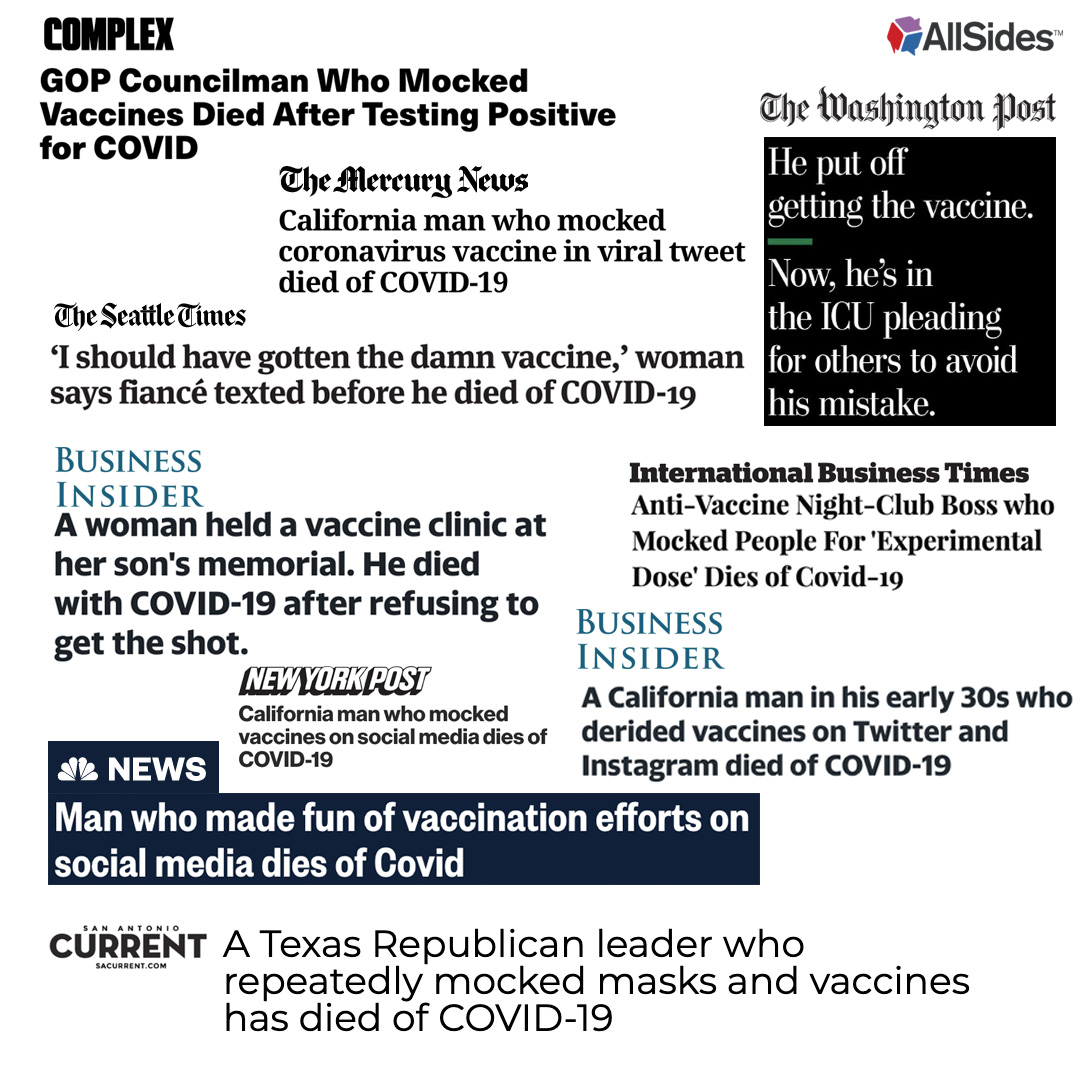 On the flip side, we’re seeing other outlets, mostly on the right, highlight stories of people who got the vaccine, then fell ill or died.

Numerous stories like this have come from Daily Mail (Right), as well as from outlets like New York Post (Lean Right), Newsweek (Center), and Fox News (Right): 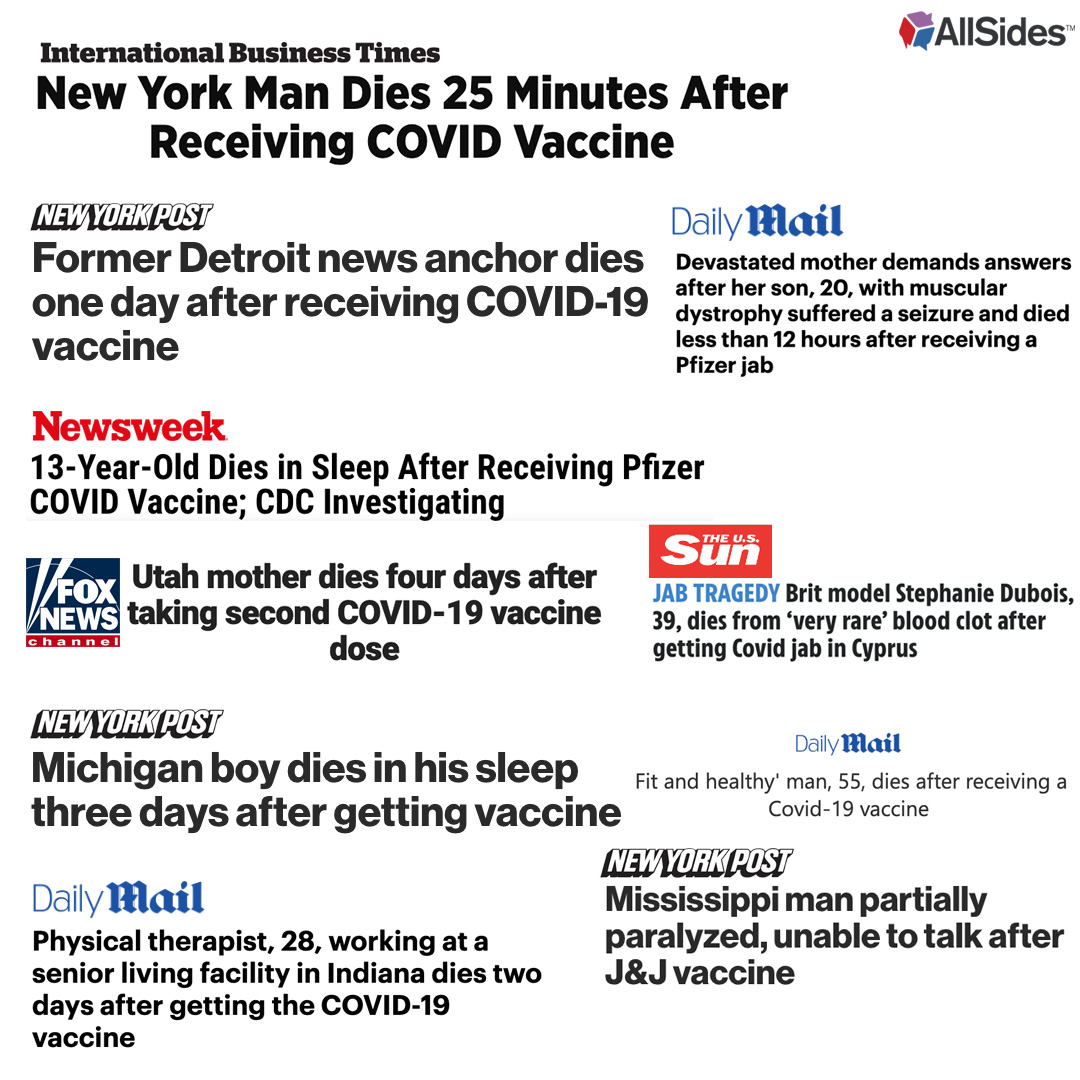 (It’s worth noting that New York Post and Daily Mail, featured in the second graphic, have a track record of sensationalist, tabloid-style content in their coverage overall. They are always more likely to focus on individual stories that elicit shock, as AllSides has noted in our bias reviews of both outlets.)

Is It Ethical For the Media to Highlight People's Death Following Personal Health Decisions?

So, should the media share stories about everyday people’s health decisions leading up to their deaths or illnesses?

The media rarely runs stories about someone’s death when it is attributable to other health decisions. For instance, we never see headlines such as: “Man who never ran a day in his life dies”; “Women who smoked three cigarettes per day now in critical condition.”

It’s because stories like this don’t serve a collective or political agenda. If our elites were hoping to ban all fast food, perhaps we’d start to see more stories such as, “Man who ate McDonald’s every day for lunch dies of heart disease,” “50-year-old dies from high blood pressure after a lifetime of eating Wendy’s.”

Shame can certainly be a motivator in getting people to make good choices, and that may be the thinking behind a lot of these stories. The thinking is that highlighting stories of covid deaths will encourage people to get vaccinated, or highlighting stories of adverse vaccine reactions will encourage them to avoid it. But the problem is that we don’t agree on what a good choice really is, and that’s why we see this polarization. In addition, news stories about individual health outcomes can be valuable, but they do not protect the privacy of the individual.

I monitored the conversation about this on Twitter, and found people saying they believe stories of unvaccinated people dying from COVID represent the media responding to the “huge market for poetic justice”. Others said they are “legit cautionary tale[s]”, and others noted that “schadenfreude sells.”

Kyle Becker, a Fox News (Lean Right) veteran and CEO of BeckerNews.com (not rated), derided NBC for its story about an unvaccinated person dying, saying that it’s unknown if people would have died anyway/if their deaths were directly attributable to COVID or to their lack of vaccination:

This funny to you? How do you know he wouldn't have died anyway? The family should sue you.

It is notable that some of the headlines featured above say someone died “after contracting COVID” or “with COVID,” rather than stating they died “from COVID.” On the flip side, some headlines say someone died “days after taking the vaccine,” not “from the vaccine.” This type of vague language (known as spin) is notable. People with underlying health conditions are more likely to succumb to the virus, for one thing. If a media outlet omits this, it can play into sensationalism and be a case of bias by omission. At the same time, how are reporters to know someone’s exact health profile, and even if they did, would that be ethical to share?

Pushing a Narrative and Reinforcing Our Beliefs

It is the media’s job to tell important stories of individual human experiences. But which stories they choose to highlight can reveal their bias. Whether a media outlet is favorable or disfavorable to COVID-19 vaccination can be made more obvious via these stories.

Stories like this also play into our confirmation bias. When we see information that matches our preexisting beliefs, we feel self-righteous about our position, and dig our heels in further.

For instance, if a media outlet chooses to heavily promote stories about unvaccinated people dying, we can infer a subtext. The subtext may be: “This person got COVID and died after mocking the vaccine. See? I knew the outcome for the unvaccinated would be bad. Here’s an example that proves it.”

It works the same on the flip side, when media outlets play up horror stories of vaccine side effects. The inference here is: “This man is experiencing partial paralysis after getting the vaccine. He may never experience life normally again. See? I knew the vaccine was sketchy and rushed. Here’s an example that proves it.”

It’s not just America — the entire world is hotly divided over COVID-19 vaccines and the implications of our global situation. There’s 24/7 debate over how aggressive society and governments should be in encouraging people to get vaccinated, whether or not the vaccines are safe, whether businesses and local governments should mandate them, and whether or not vaccine passports are antithetical to bodily autonomy and a free society, or a necessary step to curb more deaths and government restrictions.

Whatever your position, there’s media fodder to backup your beliefs. All you have to do is Google it. But if you want to avoid confirmation bias, use tools like AllSides to compare competing perspectives across the spectrum.